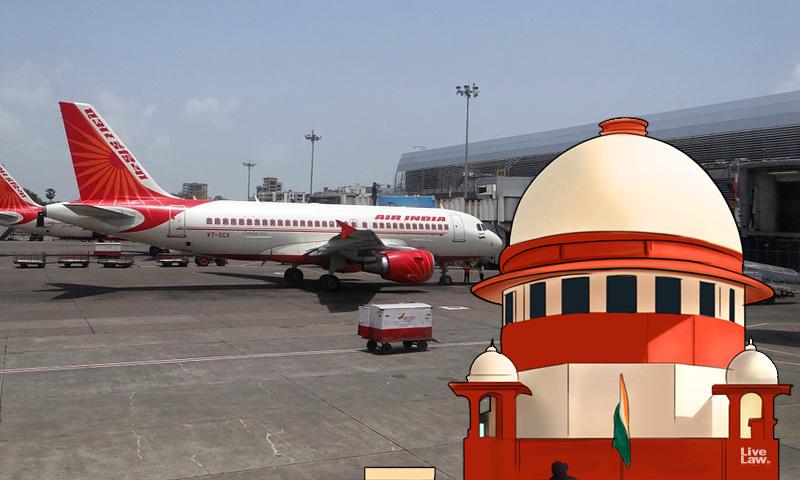 In a special sitting held on Monday, the Supreme Court allowed Air India to operate non-scheduled flights with centre seat bookings for 10 days up to June 6. However, the Court added that for non-scheduled operations after that, Air India should follow the Bombay High Court's direction to keep middle seats vacant.A bench headed by CJI Bobde passed the order in the petitions filed by Ministry...

In a special sitting held on Monday, the Supreme Court allowed Air India to operate non-scheduled flights with centre seat bookings for 10 days up to June 6.

However, the Court added that for non-scheduled operations after that, Air India should follow the Bombay High Court's direction to keep middle seats vacant.

A bench headed by CJI Bobde passed the order in the petitions filed by Ministry of Civil Aviation and Air India against the May 22 order of the Bombay HC which directed Air India to keep middle seats empty even in respect of its non-scheduled international operations.

After hearing Solicitor General Tushar Mehta for both the Centre and the national carrier, the bench ordered :

The Court remanded the matter to the High Court with a with a request to pass an effective interim order after hearing all concerned on the date fixed i.e. 2nd June, 2020.

The SC convened the special sitting on Monday despite it being a holiday on account of Eid, after both the Ministry of Civil Aviation and Air India had rushed to the apex court on Sunday night against the Bombay HC direction.

The  bench, also comprising Justices A S Bopanna and Hrishikesh Roy,  said that it was passing the order taking note of the extra ordinary situation that Air India has already issued tickets for Indians stranded abroad.

"We would normally not be inclined to interfere in an interim order passed by the HC. Learned Solicitor General has pointed out immense difficulty that has arisen as passengers who are stranded on foreign soil at airports were issues a valid ticket for travel.

According to Solicitor General Mehta, this has resulted in lot of anxiety and difficulties. Plans of families traveling together have been disrupted, among other things. Those from family who had centre seats have to be offloaded and be left behind."

The Bombay HC held that the circular issued by the Director General of Civil Aviation on March 23 to keep middle seats empty in flights to enforce physical distancing as a precautionary measure against COVID-19 was applicable to international flights.

The Centre and the Air India contended that the March 23 circular was applicable only to scheduled commercial flights, and not to special international operations undertaken to repatriate Indians stranded abroad.

It was also contended that the March 23 circular was superceded by a subsequent circular issued on May 22, which has no direction to keep middle seats empty.

The Bombay HC however held that the May 22 circular was only applicable to domestic flights.

"Prima facie, we are in agreement with the submission made by the learned Counsel for the Petitioner that those passengers who are being lifted mainly from U.S.A and U.K. may be Covid-19 infected passengers. In our prima facie view, Air India has violated Circular dated 23rd March, 2020 by not keeping one seat between two seats empty while allocation of the seat at the time of check-in", a HC bench comprising Justices R D Dhanuka and Abhay Ahuja held.

The HC passed the direction in a petition filed by one Deven Y. Kanani, an Air India pilot, who alleged that the national carrier violated the COVID-19 guidelines by allowing the booking of middle seats.

Rejecting the contention of the Air India's counsel, Dr. Abhinav Chandrachud, that the circular was inapplicable to non-scheduled international operations, the HC observed :

"Prima facie, we are unable to accept the submission of the learned Counsel for the Air India that social distancing measures which are provided by the said Circular so as to prevent spread of Covid-19 would apply only to Scheduled Flight and not to non-scheduled commercial flights or only to domestic operation and not to International. If these arguments are accepted, the whole purpose of preventing spread of Covid-19 by prescribed measures would be defeated.

Prima facie, it appears that the object behind the Circular dated 23rd March 2020 issued by the Government of India is for the safety of the passengers and for protection of their health in this emergency situation created by the Covid-19 Pandemic. In these circumstances, the Circular can not be interpreted to apply differently to the passengers who are travelling from abroad and the domestic passengers. Paramount consideration is the health and safety of these passengers and to achieve the object that they are not infected by Corona virus when they undertake any such travel".

Therefore, the HC directed Air India to comply with the March 23 circular while lifting their passengers from abroad to India also in respect of non-scheduled commercial flights.

Though the Air India's counsel later pointed out to the Court that the March 23 circular was superceded by a circular issued on May 22, the bench noted that it was applicable only to domestic flights.