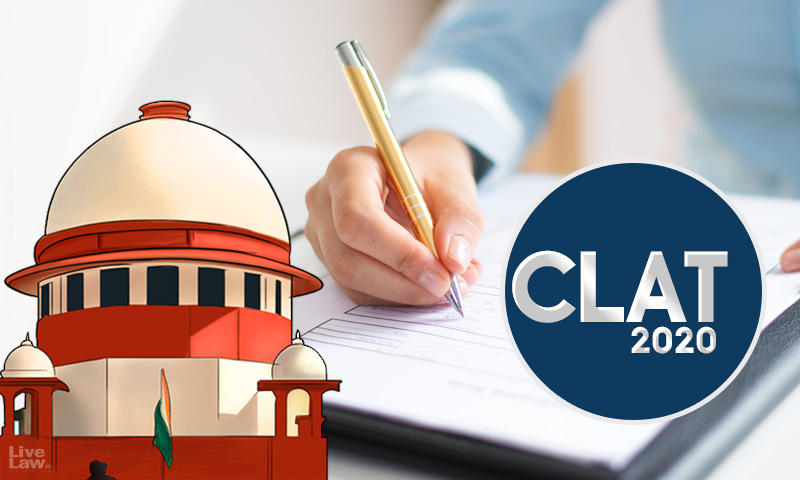 The Supreme Court on Friday allowed CLAT 2020 aspirants, liberty to make representation(s) before the Grievance Redressal Committee which is headed by Retired Chief Justice of India regarding their grievances pertaining to the conduct of the Examination.A bench headed by Justice Ashok Bhushan stated that the Committee should take a decision at the earliest on the objections raised...

The Supreme Court on Friday allowed CLAT 2020 aspirants, liberty to make representation(s) before the Grievance Redressal Committee which is headed by Retired Chief Justice of India regarding their grievances pertaining to the conduct of the Examination.

A bench headed by Justice Ashok Bhushan stated that the Committee should take a decision at the earliest on the objections raised by aspirants.

The bench however, refused to pass interim orders and declined to stay the counselling and admissions process.

Today, Senior Advocate Gopal Sankaranarayan appeared for CLAT2020 aspirant(s) and submitted before the top court that the manner in which the examination was conducted caused inconveniences to students such as being unable to feed in the right answers, wrong model answers for questions and markings.

The Court was hearing a writ Petition seeking a direction to National Law School Consortium to re-conduct the Common Law Admission Test 2020(Lavanya Gupta and others vs Consortium of National Law Universities and others).

Sankaranarayan informed the Court that 40,000 objections came regarding questions and answers. "They have given wrong answers and wrong questions. On 19,000 objections, there is no response from them," he said.

On the issue of software glitches, the Senior Advocate stated that there had been a software defect which had led to a situation that has never happened before."The cut off in this exam is not even 0 but -4!", he said.

Senior Advocate PS Narsimha appearing for the NLU Consortium on the other hand submitted that there was a misconception that those with minus marks had been called for counselling and that it was important to call students because an unending exercise for counselling could not take place in light of the pandemic situation.

Further, he added that the CLAT 2020 exercise was an extraordinary one with audits of every student who took the exam available to them.

Referring to an affidavit filed by an aspirant, Narsimha said, "the document which has been filed stipulating marks and attempted answers by the aspirant here is fraudulent. Further, I want to add the number of questions have reduced since last year."

In this context, the bench disposed off the plea with liberty to aspirants to approach the Grievance Redressal Committee, stating that their grievances shall be taken up at the earliest.

Sankaranarayan at this juncture told the Court that the Counselling etc. must not be wrapped up in the meanwhile but the bench refused to put a stay on the same, stating that the processes were to finish by October 15.

The Petition was filed by Five CLAT 2020 aspirants submitted that "CLAT 2020‟ is erroneous, faulty, defective & discriminatory and violative of Articles 14 & 15 of the Constitution of India.

As per the Petition 'CLAT 2020‟ in peculiar circumstances wherein results declared by the Consortium of NLU, are totally wrong, incorrect, erroneous and therefore, biased due to following reasons:-

2. The result is displaying and calculating marks in those questions, which were not even attempted by the candidates.

4. 10 questions are either itself wrong, or their answers which are uploaded on website are wrong.

It is also submitted that the Consortium of National Law University issued press release on 3rd October 2020 in very arrogant way, stating therein that large number of objections are filed because CLAT-2020 had made filing of objections absolutely free, however, other institutions charge Rs. 1,000/- per objection.

Therefore, neither grievance committee nor the consortium looked into the issues of objections / grievances filed by the petitioners / aspirants in large numbers, however, dealt the same with biased approach in very arrogant way.

It is also submitted that some students comes from non-English background, therefore, such a debauched focus on English reading and comprehension skill has a disproportionate impact on these students. This clearly renders CLAT 2020 discriminatory and violate of Articles 14 and 15; and on this ground alone, the exam ought to be quashed as arbitrary and violative of Article 14 of the Constitution.

'Many questions in "CLAT 2020‟ were formed in such a way that all four options were not the actual answers according to the questions, for example, question no‟s 146 to 150. Further, the wrong answers were provided in the answer key for several questions, e.g. questions 5, 6, 8, 14, 16, 19, 35, 45, 103, 122 and 125 (From the English, Logical Reasoning and Legal Reasoning sections). Apart from that, many questions had more than one right answers, so instead of choosing correct answers the candidates were trying to guess "most appropriate" option".

It is also submitted that several other questions were of such a standard that even seasoned practicing lawyers would need to do extensive legal research before attempting to answer them, and even after such research no objective answer could be given to these questions. These questions were based on opinion rather than based upon study and knowledge, hence should not have been included in such "objective" type examination