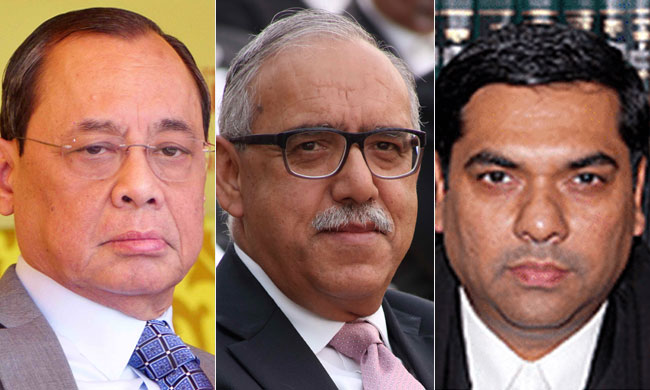 A three judges' bench of the Supreme Court headed by Chief Justice of India Ranjan Gogoi today answered a reference on the scope of discretion of adjudicating authority under Section 15J of the Securities and Exchange Board of India Act 1992 in relation to imposition of penalties.Section 15J specified the factors to be considered by the adjudicating authority while...

A three judges' bench of the Supreme Court headed by Chief Justice of India Ranjan Gogoi today answered a reference on the scope of discretion of adjudicating authority under Section 15J of the Securities and Exchange Board of India Act 1992 in relation to imposition of penalties.

Section 15J specified the factors to be considered by the adjudicating authority while imposing penalties.

Two questions were referred to the bench :

Regarding the first question, the bench held that the factors under Section 15J are illustrative and not exhaustive.

"we are inclined to take the view that the provisions of clauses (a), (b) and (c) of Section 15­J are illustrative in nature and have to be taken into account whenever such circumstances exist", observed the judgment authored by Justice Sanjiv Khanna for the bench which also comprised Justice Deepak Gupta.

"But this is not to say that there can be no other circumstance(s) beyond those enumerated in clauses (a), (b) and (c) of Section 15­J that the Adjudicating Officer is precluded in law from considering while deciding on the quantum of penalty to be imposed", added the bench.

The second question was referred particularly with respect to Section 15A(a) on the ground that the provision could apply even to technical defaults of small amounts and, therefore, prescription of minimum mandatory penalty of Rs.1 lakh per day subject to maximum of Rs.1 crore, would make the Section completely disproportionate and arbitrary.

The bench had to decide whether for the period between 2002 to 2014, there was a mandatory minimum penalty of Rs. one lakh per day.

In this regard, the Court observed :

"we would hold the legislative intent was not to prescribe minimum mandatory penalty of Rs.1 lakh per day during which the default and failure had continued".

" We would prefer read and interpret Section 15­A(a) as it was between 25th October, 2002 and 7th September, 2014 in line with the Amendment Act 27 of 2014 as giving discretion to the Adjudicating Officer to impose minimum penalty of Rs.1 lakh subject to maximum penalty of Rs.1 crore, keeping in view the period of default as well as aggravating and mitigating circumstances including those specified in Section 15­J of the SEBI Act"

The conclusion was based on the reasoning that holding it otherwise would obliterate the discretionary power to fix quantum of penalty under Section 15J.

The judgment also explained the differences in the concepts of "continuing offence" and "repeat offence".

The continuing offence is a one which is of a continuous nature as distinguished from one which is committed once and for all. Continuing offence constitutes a fresh offence every time or occasion it occurs. the liability continues until the rule or its requirement is obeyed or complied with. On every occasion when disobedience or non­-compliance occurs and reoccurs, there is an offence committed.

A recurring or successive wrong, on the other hand, are those which occur periodically with each wrong giving rise to a distinct and separate cause of action.

This was explained in in view of clause (c) of Section 15­J of the SEBI Act which refers to repetitive nature of default and not a continuing default.

The bench clarified that the word "repetitive" used in Section 15J(c) would refer to a recurring or successive default.  This factum has to be taken into consideration while deciding upon the quantum of penalty.

At the same time, the bench also added that "this dictum, however, does not mean that factum of continuing default is not a relevant factor, as we have held that clauses (a) to (c) in Section 15­J of the SEBI Act are merely illustrative and are not the only grounds/factors which can be taken into consideration while determining the quantum of penalty".