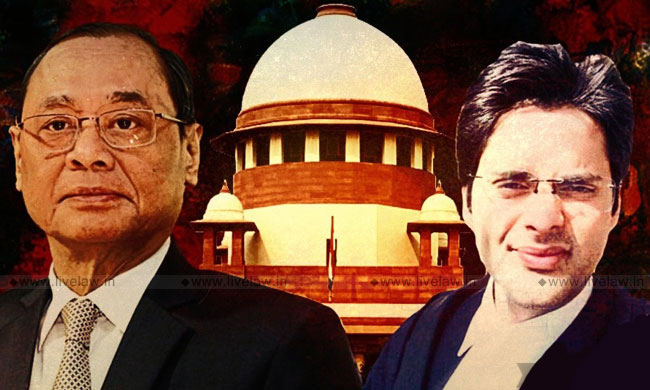 The Supreme Court todays asked advocate Utsav Bains to file an additional affidavit to substantiate his allegation that three disgruntled employees of the Supreme Court conspired along with corporate lobbyists to frame sexual harassment allegations against the CJI.The bench of Justices Arun Mishra, R F Nariman and Deepak Gupta had earlier summoned the chiefs of CBI, Delhi Police and IB to...

The Supreme Court todays asked advocate Utsav Bains to file an additional affidavit to substantiate his allegation that three disgruntled employees of the Supreme Court conspired along with corporate lobbyists to frame sexual harassment allegations against the CJI.

The bench of Justices Arun Mishra, R F Nariman and Deepak Gupta had earlier summoned the chiefs of CBI, Delhi Police and IB to their chambers at 12.30 to decide on the course of probe to be taken in regard to conspiracy against CJI.

Advocate Utsav Bains, who had claimed that the sexual harassment allegations against the CJI was part of a plot by corporate houses and fixers to compel the CJI to resign, was present in Court today morning. Bains handed over materials to the Court in a sealed cover. He said that the materials contained a CCTV footage which will reveal "many things".

After that the bench re-assembled at 3 to have further interactions with Bains in the presence of Attorney General.

"He has given an affidavit in Court in a sealed cover. The same is taken on record. It is to be kept in a sealed cover in total confidentiality, as it contains highly sensitive information pertaining to the alleged conspiracy, according to him, to frame Hon'ble The Chief Justice of India into a case of sexual harassment. In that connection, he has stated to have met with certain persons at certain places.

He has further mentioned in the affidavit that the disgruntled employees have ganged together in order to frame Hon'ble The Chief Justice of India in the false charge of sexual harassment after their dismissal from their services. He has named in particular, names of Tapan Kumar Chakraborty and Manav Sharma and others", observed the bench in the order passed after hearing.

The Court also directed the CBI, Delhi police and Intelligence Bureau to "seize the relevant material in order to support the contents of the affidavit" furnished by Bains.

The session witnessed some dramatic exchanges between Bains and the bench, especially Justice Nariman.

The Attorney General said ""We are only concerned about how a person can file an affidavit of this nature but doesn't produce evidence. I really cannot understand how a person can make certain allegations and claim rest is privileged".

In the morning session, the AG had pointed out that Bains's affidavit had significant departures from his Facebook post made on the issue, where he had alleged that "lobby of disgruntled judges" were also part of the plot against CJI. However in the affidavit, there is no mention about that.

This submission by AG had made Bains lose cool in the morning, and he said that he was disappointed at the "cheap allegations" against him.

The AG's submissions in the afternoon expressing doubts about Bains's claim of privilege made Bains lose his temper again.

Bains complained that the AG has been making attacks on him and was doubting his integrity.

This was not appreciated well by Justice Nariman, who sad " You have no right to doubt him. He's the most respectable member of the bar. We all look up to him. If you say doubt, we will throw you out".

At this, Bains said that he was "walking out of the court on his own".

Justice Arun Mishra intervened at this juncture to placate the young lawyer. "You are a young man. Don't take things to your heart. He(J Nariman) didn't mean he'll throw you out. He was communicating his anger", Justice Mishra told Bains.

Senior Advocate Indira Jaising also intervened in the matter and expressed concerns about possible conflicts between parallel proceedings - the present one and also the in-house enquiry by panel headed by Justice Bobde.

"The other committee is not competent to look into this issue". Justice Arun Mishra said in that regard.

"We want to know veracity of the affidavit. If he is saying that there are fixers, we want to go to the root of the matter. That is a serious issue before us. We are going to inquire and inquire into it. The supreme court will no survive otherwise. Not just us", added Justice Mishra.

Justice Mishra also said that the materials submitted by Bains alleged that the disgruntled employees of the SC had tried to frame the CJI. Justice Mishra added the CJI Gogoi had taken action against erring employees Tapan Kumar Chakraborty and Manav Sharma (referring to dismissal of court staff who tampered order in Anil Ambani contempt case)

Jaising said that Bains should file an affidavit regarding his credentials.

After the hearing, Justice Mishra dictated the order, asking for another affidavit by Bains regarding his allegations against sacked employees. The Court also said that it will decide the issue if privilege can be claimed over the communications between Bains and the alleged conspirators.

"In the affidavit, he has also given certain names and has also alleged that they have asserted that they could fix the bench of the Judges. This is a very serious aspect of the affidavit filed by Mr. Utsav Singh Bains, a young man whose entire career is before him. He knows the consequences of filing false affidavit in this court.Considering the seriousness of the allegations as the system has absolutely no place for such fixers, we cannot leave the matter at that. It becomes our responsibility to keep this Institution clean as well as to ensure that the image of this Institution is not tarnished by such allegations to undertake the probe in the matter." , the bench said in the order passed.

The bench also noted that Bains was in the "process of filing a filing an additional information in the form of an affidavit", and directed him to do so before 10.30 AM tomorrow.

The bench also clarified that this will not affect the pending inquiry by the in-house panel.