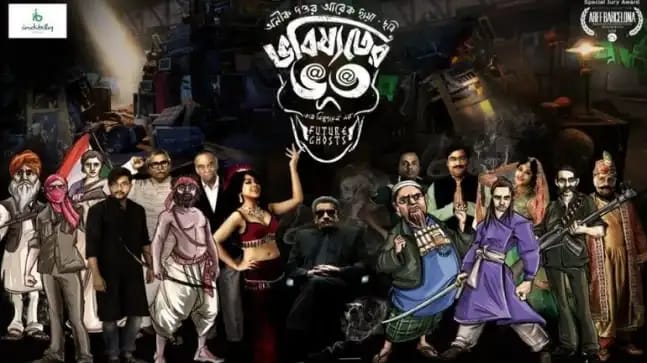 The Supreme Court today directed the West Bengal Government to ensure that the screening of the film "Bhobishyoter Bhoot" takes place without unlawful obstruction. This interim order was passed by the bench of Justices D Y Chandrachud and Hemant Gupta while issuing notice to WB Government on a petition by the producers of the film complaining that the film was taken off from the...

The Supreme Court today directed the West Bengal Government to ensure that the screening of the film "Bhobishyoter Bhoot" takes place without unlawful obstruction.

This interim order was passed by the bench of Justices D Y Chandrachud and Hemant Gupta while issuing notice to WB Government on a petition by the producers of the film complaining that the film was taken off from the theatres following an 'unofficial ban' by the Government.

"Repeatedly, in decisions of this court, it has been held that once a film has been duly certified by CBFC, it is not open to any authority either of the State Government or otherwise to issue formal or informal directions preventing the producer from having the film screened. Such actions of the State directly impinge upon the fundamental right to the freedom of speech and expression"

The film directed by Anik Datta had ran into controversy due to its satirical content lampooning political parties.

In its petition, Indibily Creative Pvt Ltd alleges that the State of West Bengal is misusing police power and acting as a "super-censor". It essentially asserts that such obstruction to the exhibition of the movie violates its rights, as it had duly obtained a UA certificate for the movie from the Central Board of Film Certification (CBFC).

The petitioner informs the court that it had received a letter from the State Intelligence Unit (SIU) of Kolkata Police asking for a pre-screening of the film for senior officials of the Intelligence Unit of the Kolkata Police. The letter had allegedly stated that this was because inputs had been received that "the contents of the film may hurt public sentiments which may lead to political law and order issues". To this, the petitioner had assured the state police that CBFC had already addressed such concerns while issuing the certificate.

Nevertheless, without any communication from the exhibitors, the producers came to know on day two of the film's release that it had been abruptly taken off majority of cinema halls and viewers were being refunded the price of their tickers. The Director and a few members of the cast and crew who visited Inox South City were told by local personnel that unnamed "higher authorities" had instructed them to take the film off that day. The petition claims that they were informed by several exhibitors, on conditions of anonymity, that the Station House Officer from the local police station had instructed them to stop screening the film with immediate effect.

The petitioner's representation to the Eastern India Motion Pictures Association and a communication seeking explanation from the Kolkata Police Commissioner did not garner any positive response as well. Asserting that this silence reveals the State's involvement in its movie being brought down, the petitioner contends,

"Petitioners urged the State to uphold the Rule of Law and Right to Freedom of Speech and Expression, and not to be seen to be doing the very opposite, but the Government of West Bengal has maintained a stony silence that does little to conceal its obvious interference which is apparent in light of its prior communication through its State Intelligence Unit and the remarkably organized / concerted removal of the large-scale unlawful removal of the Film from the cinema halls in Kolkata", states the petition filed by Advocate Rukshana Choudhury.

The petitioner points out that only two remote halls in the upcountry West Bengal are now showing the film. It therefore alleges violation of its right to freedom of speech and expression and right to occupation by the State machinery, contending, "...the Film remains unlawfully obstructed from being exhibited in Kolkata in cinemas in areas under the jurisdiction of Kolkata Police, in a brazen and back-handed manner with a deliberate avoidance of any written order, in calculated, wilful and defiant violation of Supreme Court rulings and all principles and provisions of law."

Alleging violation of their rights under Articles 14, 19(1)(a), 19(1)1(g) and 21 of the Constitution of India, the petition then seeks urgent redress from the Apex Court, demanding unhindered exhibition of the film.