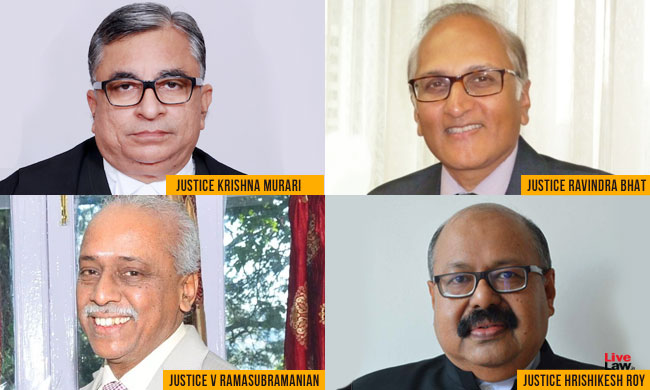 With their swearing in, the SC has the all time high strength of 34 judges (including CJI).

Two additional court rooms - Court Room Nos.15 and 16 - have been set up to accommodate the new judges.

Justice Krishna Murari is sitting in Court No.3 with Justice Ramana and Sanjiv Khanna.

The Collegium of CJI Ranjan Gogoi, Justices Bobde, Ramana, Arun Mishra and R F Nariman had recommended their elevation on August 28 after finding them more "desirable and suitable than other Chief Justices and senior puisne Judges of High Courts". The Collegim said that they have taken into consideration the combined seniority of all judges and has kept in mind the desirability of giving due representation to all High Courts, as far as possible.

He stands at Serial No.5 in combined seniority of HC judges on all-India basis.

Justice Ravindra Bhat was a judge of Delhi High Court for fifteen years from 2004. He was made the CJ of Rajasthan High Court last April.

He hails from Mysore, Karnataka and had his law education from Campus Law Centre, Delhi. He enrolled as a lawyer in 1982 and started practice in the Delhi High Court. He became a judge of Delhi HC in July 2004.

As a judge of Delhi High Court, he was part of several notable judgments such as declaration that RTI is applicable to the office of CJI etc.

He stands at Serial No.12 in combined seniority of HC judges on all-India basis.

Justice V Ramasubramanian hails from Chennai, Tamil Nadu. After graduating in Law from the Madras Law College, he enrolled as a member of the bar on February 16, 1983. After 23 years of practice of law in Chennai, he was made a judge of Madras High Court in July 2006.

He was sworn in as the Chief Justice of Himachal Pradesh High Court on 22nd June, 2019.

He stands at Serial No.42 in combined seniority of HC judges on all-India basis.

Justice Hrishikesh Roy, hailing from Assam, was made the judge of Gauhati High Court in October 2006. In 2018, he was appointed the Chief Justice of High Court of Kerala.

In 1982, Roy passed LL.B. from Campus Law Centre, University of Delhi. He graduated along with Justice Ravindra Bhat.

He was initially enrolled under the Bar Council of Delhi thereafter shifted to Guwahati. He was designated as Senior Advocate of Gauhati High Court on 21 December 2004.

He stands at Serial No.46 in combined seniority of HC judges on all-India basis.