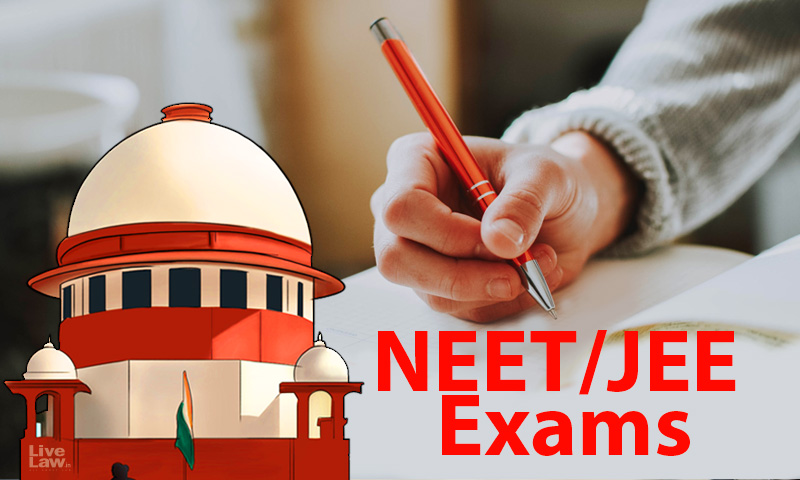 The bench also refused to waive off the condition of quarantine for such students and said that the quarantine was mandatory in the interest of public health.

"The Petitioner requested for relaxation of 14 days quarantine. We are afraid such a direction cannot be given as it would endanger public health", the bench observed.

However, the bench allowed the students to approach the State authorities to seek a relaxation of the quarantine period.

The top court was considering a Special Leave Petition filed by Abdul Azeez, the General Secretary of Kerala Muslim Culture Centre, challenging a judgment of the High Court of Kerala which rejected the prayer to set up exam centres in middle eastern countries.

Advocate Harees Beeran, appearing for the petitioners, submitted that while the National Testing Agency is conducting Joint Entrance Examination via online mode, it is conducting NEET via physical mode, which is discriminatory. NTA has set up centres for JEE in Dubai, Muscat, Riyadh, Doha etc, he submitted.

Also, 60% of the students are appearing in both JEE and NEET. JEE is being held online on September 6. So, the students who give JEE will not be able to appear for NEET physical exam in India on September 13, if they have to undergo the mandatory quarantine period after returning, explained the counsel.

However, the bench expressed disinclination to accept this plea.

"We need to take care of public health too. There is enough time, it's on 13th(September). Ask them to come now, so that 14 days quarantine can be over", Justice Rao told Beeran.

On August 22, the MCI had filed its response stating that the plea for overseas examination centres for NEET 2020 should be dismissed as the students have the option to come to India under the "Vande Bharat Mission". It has also submitted that postponement of the examination any further shall be a "drastic deviation" from the academic schedule which may affect the subsequent academic years of the students.

On August 14, the top court had told petitioner(s) seeking allocation of Test Centres for NEET Examination in foreign countries that Vande Bharat flights for return to India are being made available amid pandemic.

The Bench had quoted National Testing Agency's (NTA) counter affidavit before the Supreme Court, intimating that it is not possible to have overseas examination centres for NEET 2020 because the examination is conducted in "paper book format".

To this, Advocate Haris Beeran had submitted that it was very difficult to get tickets for students during the pandemic period.

Thus, the bench had asked the Medical Council of India to submit the response

Standing by the decision of Kerala High Court, the NTA has submitted,

"the manner as to how examinations have to be conducted is a policy decision and, is, purely within the domain of the examining body viz., MCI and whether centres for conducting such examination should be provided in foreign countries, is in the province of MCI, to decide. MCI has taken its decision and, there is nothing on record which shows that the said decision of MCI is arbitrary or illegal."

NTA informed the court that it had duly consulted with the MCI regarding the students' demand for overseas test centers. However, the MCI has clarified that as the examination is conducted through Multiple Choice Questions in paper book format given to all candidates and, uniformity has to be maintained for all candidates, therefore, NEET (UG) examination should not be conducted in online mode for candidates abroad.

Highlighting the practical difficulty in fulfilling the students' demands, the affidavit states,

"examination cannot be conducted in abroad cities due to the fact, as already stated, NEET (UG) has to be conducted in single shift at the same time, on the same day to maintain uniformity and, further, the questions papers and other exam materials are to be transported from NTA headquarters to a large number of examination centres in various cities, which would require meticulous planning for safe and secured delivery of the same at the examination centres on time."

The plea filed by Advocates Haris Beeran and Pallavi Pratap submitted that there are 4000 students registered for NEET-UG from Qatar and the Middle-East, and that there exist procedural difficulties in getting affidavits attested from the Embassy of India in Qatar and sending it to India for filing of the same due to the pandemic.

In wake of the lockdown imposed to contain the virus, students have tried to register themselves for repatriation under the Vande Bharat Mission introduced by the Government of India, however, none of them managed to get seats in the said flights.

"It is primarily because the VBM flights are mainly intended to repatriate the people who are in distress, migrant labourers, people who are in a medical emergency, as also students stranded in various universities abroad."

Justice Arun Mishra, presiding the bench, said that the postponement of the exams will put the 'career of the students in peril'.