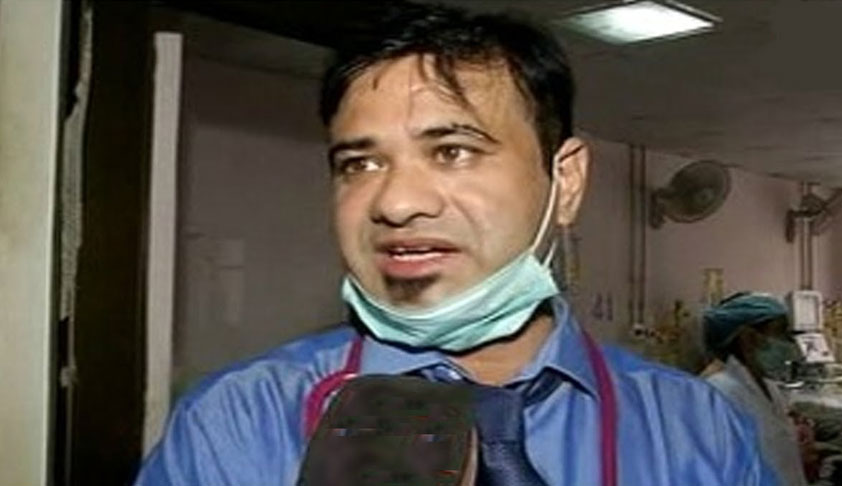 The Supreme Court has directed Allahabad High Court to expeditiously dispose of the habeas corpus plea filed by Dr. Kafeel Ahmad Khan who has been in detention at Mathura Jail since 29th January, 2020.A Bench headed by Chief Justice of India SA Bobde heard an Application filed by the Petitioner seeking for directions in the habeas corpus plea and directed the High Court to dispose...

The Supreme Court has directed Allahabad High Court to expeditiously dispose of the habeas corpus plea filed by Dr. Kafeel Ahmad Khan who has been in detention at Mathura Jail since 29th January, 2020.

A Bench headed by Chief Justice of India SA Bobde heard an Application filed by the Petitioner seeking for directions in the habeas corpus plea and directed the High Court to dispose of the matter expeditiously, preferably within a period of 15 days.

Senior Advocate Indira Jaising, appearing on behalf of the Petitioner, submitted to the Court that the detention of Khan was a counter-blast to the bail that had been granted to him.

"He was granted bail by a reasoned bail order that was not challenged and as a counter-blast measure, NSA has been imposed. Since the Supreme Court order in March this year, the HC has not heard the matter on merits."

"Personal Liberty is something we have prioritised at all times",said CJI.

CJI accordingly directed that as a question of personal liberty was involved, the High Court was to dispose of the matter from the date the parties appeared before it.

To this, Jaising asked for the addition of the term "through video conferencing".

CJI responded, "Let them do it anyhow. Appear means video as well. That is also appearance. Right now, you are appearing before us".

Jaising stated, "Yes, my Lord. It is counted as a regular documented appearance."

In a lighter vein, the CJI commented, "Virtual hearings are not new, We have seen it from the days of the Mahabharata". In response, Jaising smiled and stated, "I don't know about that, but from the days of the pandemic, yes, my Lord." To this, the CJI remarked, "No, no. This kind of appearance we are saying. Sanjaya did."

Khan, who is well-known and qualified paediatric doctor had given a speech on 12th December, 2019, and on the basis of that speech, an FIR had been registered against him in Aligarh on the same. On 29th January, 2020, a Special Task Force and Uttar Pradesh Police arrested Khan from Mumbai. He was first detained in Aligarh Jail, and then transferred to Mathura Jail.

Despite bail being granted to Khan on 10th February, he was not released, and provisions of the National Security Act, 1980 were invoked against him 3 days later.

Accordingly, a habeas corpus plea was filed on behalf of Khan's mother by Advocate-on-Record Fuzail Ahmad Ayyubi and drafted by Advocate Ibad Mushtaq, stating that "in the most recent and arbitrary action carried out by the State against the son of the present Petitioner, he has been arbitrarily detained under the provisions of the National Security Act, 1980, by passing a hurried order on 13.02.2020, devoid of any valid grounds for the detention of the present Petitioner's son."

The matter came up for hearing on 18th March, 2020, and the Supreme Court directed Allahabad High Court to take up the plea and for the record of the matter to be transmitted to the HC.

However, due to the lockdown imposed in wake of the COVID-19 pandemic, it became difficult to follow-up with the Registry of the High Court, and, as submitted in the Application, the Counsels of the Petitioner requested the Registry to register the matter transmitted from the Supreme Court.

The Application contends that despite several attempts, the case of the Petitioner was not registered throughout the month of April, and it was only on 11th May, that a case was finally registered.

"During this time, the son of the Petitioner did and continues to languish under the garb of preventive detention through an order passed under the National Security Act, 1980 arbitrarily and with apparent mala fide intent."

The Application goes on to enumerate instances wherein the matter was adjourned, thereby infringing Khan's right to access of justice encompassed under Article 21 of the Constitution of India. In light of the same, the Application prays for directions to the Allahabad High Court to post the habeas corpus plea for final disposal.