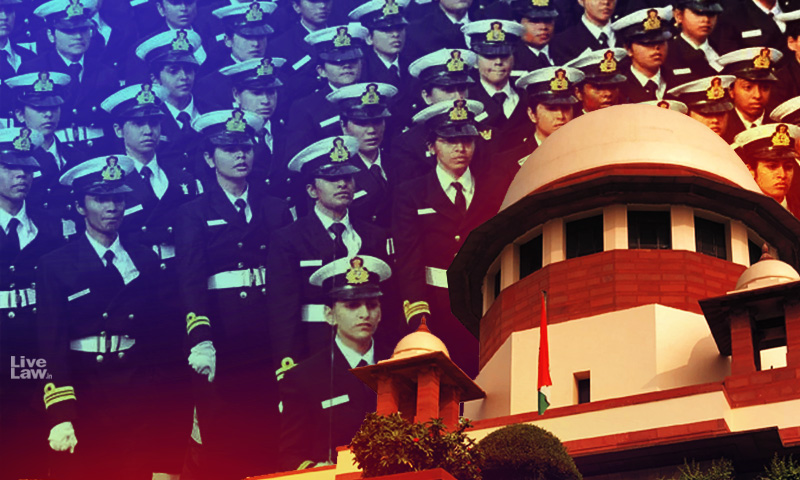 In a land mark verdict on gender equality, the Supreme Court on Tuesday held that serving women Short Service Commission Officers in Indian Navy were entitled to Permanent Commission at par with their male counterparts.A division bench comprising Justices D Y Chandrachud and Ajay Rastogi pronounced the verdict in the case Union of India vs Ld Cdr Annie Nagaraja and others and connected...

In a land mark verdict on gender equality, the Supreme Court on Tuesday held that serving women Short Service Commission Officers in Indian Navy were entitled to Permanent Commission at par with their male counterparts.

A division bench comprising Justices D Y Chandrachud and Ajay Rastogi pronounced the verdict in the case Union of India vs Ld Cdr Annie Nagaraja and others and connected matters. It may be noted that the same bench had on February 17 delivered a judgment favouring extension of Permanent Commission for women in the Indian Army, in the case The Secretary, Ministry of Defence vs Babita Puniya and others.

In the present case (Annie Nagaraja & connected cases), the SC was considering the appeals filed by the Union Ministry against a judgment delivered by the Delhi High Court on September 4, 2015 allowing the claim of women officers for permanent commission.

Rejecting the appeals of the Union Government and upholding the Delhi HC judgment, the SC held that both male and female officers are to be treated equally in granting permanent commission in Indian Navy, once the statutory bar for inducting women in Navy was lifted.

The Court rejected the Centre's objections based on physiological features of women as "gender stereotypes".

"Performance at work and dedication to the cause of the nation are the surest answers to prevailing gender stereotypes. To deprive serving women officers of the opportunity to work as equals with men on PCs in the Indian Navy is plainly discriminatory. Furthermore, to contend that women officers are illsuited to certain avocations which involve them being aboard ships is contrary to the equal worth of the women officers who dedicate their lives to serving in the cause of the nation"., Justice Chandrachud, reading out the operative part of the judgment, stated.

The Court also rejected the submission that women officers are not suited for sea-sailing duties.

"It is impossible to countenance a  submission that women cannot sail alongside men sailors", the Court observed.

The Centre has been directed to implement the directives within three months. Applications of servicing officers for Permanent Commission shall be considered on availability of vacancies

The grievance raised by the officers was that after having completed 14 years of service as Short Service Commission Officers, they were not granted Permanent Commission and instead were released from service.

Women were not commissioned in the Navy till the issuance of notification dated 9th October, 1991 whereby for the first time, the power under the enabling provision under Section 9(2) of the Navy Act, was exercised to lay down that women would also be eligible for appointment as officers in the Indian Navy. But the induction of women was confined to four branches namely Logistics, Law, ATC and Education. It was also stated by the Ministry then that policy guidelines regarding permanent commission for women will be laid down in 1997. But such guidelines were not laid down until 2008.

On 26th September, 2008, the Ministry for the first time took a decision to grant Permanent Commission to SSC women Officers in all the three Forces. But this offer was restricted to certain categories and was also to operate prospectively. As per this policy, only women officers inducted after January 2009 were eligible for Permanent Commission, that too only in the branches of education, law and naval architecture. The cadres of logistics and ATC, which were opened to women for SSC in 1991, were excluded.

The officers challenged this primarily on two reasons; firstly, the same being prospective in nature giving no benefit to those who had already completed 14 years of service and secondly, the exclusion of their cadres from PC.

They pointed out that Regulation 203 of Chapter IX of the Indian Navy Act, 1957 puts no restriction to the grant of permanent commission either gender wise or category wise.

In Delhi HC, a division bench comprising Justices Kailash Gambhir and Najmi Wazri held the denial of PC to women SSC officers in the cadres of ATC and Logistics to be discriminatory.

"We fail to comprehend that when these petitioners along with the male officers had undertaken the same kind of training but nevertheless were denied permanent commission although the men were granted the permanent commission with no special merit except for the fact that they belong to the male sex. If this does not tantamount to gender discrimination then what else does? ", the HC had observed, while ordering that PC should be offered to the petitioners.