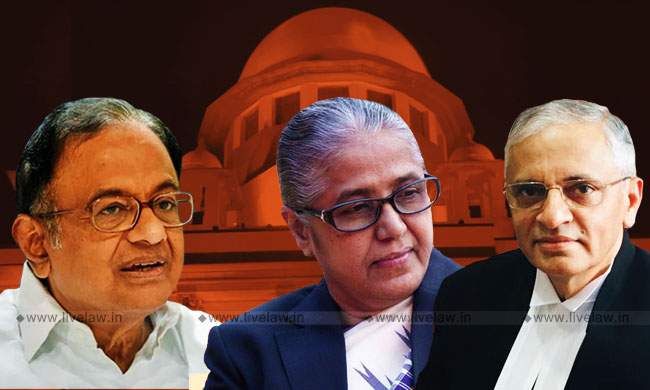 The Supreme Court bench of Justices Bhanumati and A S Bopanna on Monday dismissed the petition filed by the former Union Finance Minister P Chidambaram challenging the August 20 judgment of the Delhi High Court that refused pre-arrest bail to him in the case registered by Central Bureau of Investigation in the INX media case.

The bench said that the petition has become 'infructuous' as Chidambaram has already been arrested and remanded to CBI custody. He is at liberty to seek regular bail before the trial court, said the bench. The bench added that the trial court must consider the application for regular bail without being influenced by the observations made by the High Court.

Apart from the CBI case for alleged corruption in INX media case, the Enforcement Directorate has filed another case for alleged money laundering in the transaction. The bench is separately considering the bail plea moved in the ED case.

Senior Advocates Kapil Sibal and Dr A M Singhvi, appearing for the Chidambaram, tried to convince the bench that the petition had not become infructuous as he was arrested while his petition was pending in the SC.

The CBI could not have arrested him on August 21 when his case was listed for consideration on August 23, they submitted.  The Court has power to restore the status quo ante with regard to the arrest which was made against the listing of the Court, argued both Sibal and Singhvi.

The bench however was not persuaded by these submissions, and ordered the petition to be dismissed.

The cases were registered in 2017 and 2018 by the CBI and ED respectively.

The Delhi High Court dismissed his application for anticipatory bail on August 20 after observing that it was a "classic case of money laundering". Chidambaram was termed the "kingpin and key conspirator" of the alleged corruption deal.

The CBI Judge Ajay Kumar Kuhar on August 22 allowed CBI remand for four days observing that the allegations were "serious in nature" and a "detailed and in depth investigation is required in the case".