In Rafale Case, SC Gets Its 'Pentagon Papers' Moment 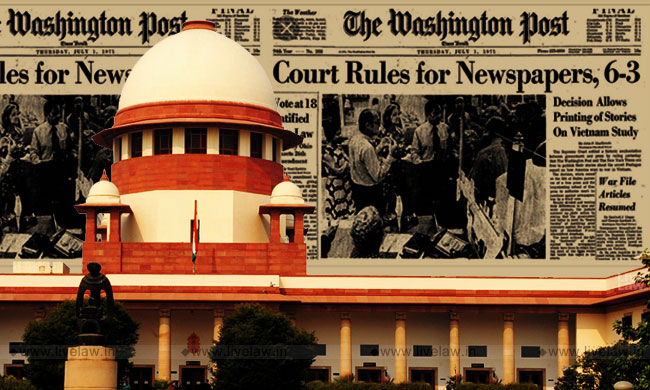 While rejecting the Central Government's objection that 'secret' defence documents published by media should not be admitted into evidence in Rafale review, the Supreme Court applied the principle laid down by the US Supreme Court in the 'Pentagon Papers case'.Amidst the Vietnam war, 'The New York Times' had published documents leaked from Pentagon, which revealed that the...

While rejecting the Central Government's objection that 'secret' defence documents published by media should not be admitted into evidence in Rafale review, the Supreme Court applied the principle laid down by the US Supreme Court  in the 'Pentagon Papers case'.

Amidst the Vietnam war, 'The New York Times' had published  documents leaked from Pentagon, which revealed that the U.S Government had always been aware that there was no chance of winning the war, and that despite such concrete knowledge successive governments escalated the war propaganda solely to reap political benefits.

This led to 'The New York Times' facing proceedings under the U.S Espionage Act for breaching national security,  and it was restrained from publishing. 'The Washington Post' later carried out the publications, after the gag on 'The New York Times'. Both the papers had to ultimately approach the U.S Supreme Court to protect their right to publish.

In a landmark decision The New York Times v. U.S.A(also known 'Pentagon papers case'), the U.S Supreme Court upheld the right of the newspapers to publish the documents. By a 6:3 majority, the Court held that the Constitution did not permit prior restraint on press freedom on whatever grounds.

In the Rafale matter, the judgment authored by CJI Gogoi has referred to this case.

"By a majority of 6:3 the U.S.Supreme Court declined to pass prohibitory orders on publication of the "Pentagon Papers" on the ground that the Congress itself not having vested any such power in the executive, which it could have so done, the courts cannot carve out such a jurisdiction as the same may amount to unauthorized judicial law making thereby violating the sacred doctrine of separation of powers", observed the judgment.

"We do not see how and why the above principle of law will not apply to the facts of the present case",  CJI Gogoi added.

The Court noted that there was no provision in the Official Secrets Act or any other law which gave any power of the government to place prior restraints on the publication of documents marked as 'secret'.

The controversy pertained to three documents produced by review petitioners, which were published by 'The Hindu' on three different dates. They were the notes exchanged by the Indian Negotiating Team and the officials of Ministry of Defence in relation to the Rafale deal, which were marked "secret".

The Attorney General had submitted that these documents were "stolen" from the Ministry, and that the publication of the same amounted to offence under Official Secrets Act. On this premise, and also on the basis of claim of privilege, the AG urged that the Court should eschew these documents from consideration.

The three judges bench of CJI Gogoi, Justices S K Kaul and K M Joseph unanimously rejected these objections, and held that the review petitions will be considered on merits. Justice Joseph wrote a separate but concurring opinion, holding that after the RTI Act, Government's claim of privilege stood diluted, even in respect of matters of national security and foreign relations.