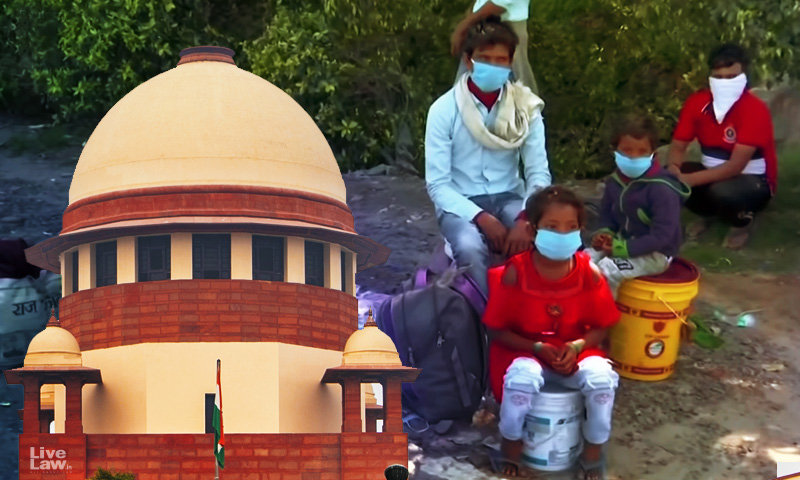 The Supreme Court on Friday granted three more weeks to States/Union Territories to bring on record details of migrants workers back to their native places vis-à-vis their skill, earlier place and nature of employment in compliance with its June 9 order."None of the States/Union Territories have filed any affidavit giving details of the compliance of the aforesaid direction....

The Supreme Court on Friday granted three more weeks to States/Union Territories to bring on record details of migrants workers back to their native places vis-à-vis their skill, earlier place and nature of employment in compliance with its June 9 order.

"None of the States/Union Territories have filed any affidavit giving details of the compliance of the aforesaid direction. The States are required to bring on record the mode and manner in which records of migrant labourers who have reached their native places are being maintained with their skill, nature of employment and other details. Let States/Union Territories may also file affidavits in the above regard within a period of three weeks." - Supreme Court

Further to this, the noted that inspite of steps taken by states and UTs in terms of the Top Court's directions to transport migrant workers within 15 days back to their native places as per the June 9 order, "there are still migrant workers stranded in different States including State of Maharashtra".

Taking note of Senior Advocate Ranjit Kumar's submission for the State of Bihar that Registration of all Migrant Workers coming to Bihar is done on Migrant Portal App on their arrival at their respective Blocks/Block quarantine camps, bench indicated that the aspect of registration as per enactments shall be done after requisite affidavit from the State is placed on record.

On the Issues regarding preparation of National Disaster Management Plan for Covid­19, the Court ordered that they shall be dealt with in the plea filed by Centre for Public Interest Litigation wherein specific pleading and prayers have been made [CPIL V. Union of India WP(C)546/2020]

On the issue of submission made by Senior Advocate Abhishek Manu Singhvi regarding food security, health insurance for migrant labourers, presumption of work by migrant labourers and relaxation on insistence on registration, Court stated that it shall delve into the same once necessary affidavits as indicated are brought on record.

In light of the above, Bench has listed the Suo Motu issue concerning migrant workers after a period of four weeks for further consideration.

In May, the Top Court had taken took Suo Motu cognisance of the problems and miseries of migrant labourers who have been stranded in different parts of the country amid the Coronavirus-induced lockdown.

In this backdrop, the Court had passed a slew of significant directions such as non-charging of fares for migrant workers for travel, providing free of cost food by the concerned state and UT to them, simplifying and speeding up the process of registration of migrants and ensuring that those walking on roads are immediately taken to shelters and provided food.

Subsequently, on June 5, before reserving orders after hearing Centre, State and few intervenors, the bench had observed that it was mulling to grant 15 days time to authorities to transport migrants to their native places. It went on to pass directions in this regard:

1) All States and UTs to identify stranded migrants and transport them back to native places within 15 days;

2) States to consider withdrawal of all cases filed against migrants under Disaster Management Act for lockdown violations, for attempting to walk to native places, crowding at stations etc;

3) In event of demand of Shramiktrains, the railways shall provide trains within 24 hours;

4) Provide all schemes to migrant workers and publicise them. Help desks to be established to help migrants to avail employment opportunities;

5) Centre and states to prepare a list for identification of migrant workers in a streamlined manner;

6) Employment relief to be mapped out and skill-mapping to be carried out for migrants;

7) Counselling centres to be established to find a way back for return travel, if they want to.

On June 19, the bench clarified that its June 9 order for transportation of migrant workers to their hometowns within 15 days was mandatory.