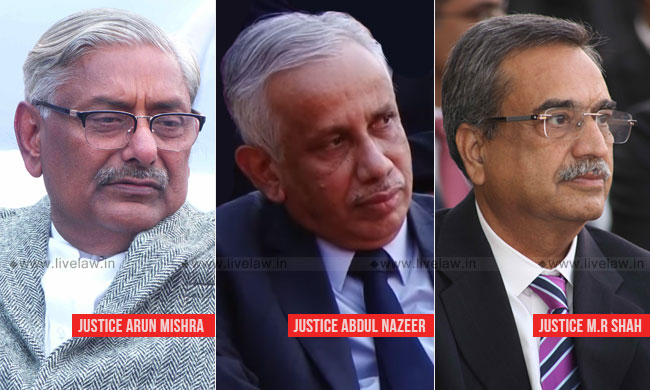 The Supreme Court on Wednesday adjourned for two weeks the hearing of the petition filed by Department of Telecommunications seeking grant of 20 years' time for telecom companies to pay off their dues on account of the SC verdict interpreting the meaning of "Adjusted Gross Revenue" in telecom licenses.Before adjourning the hearing, the bench comprising Justices Arun Mishra, Abdul Nazeer and M...

The Supreme Court on Wednesday adjourned for two weeks the hearing of the petition filed by Department of Telecommunications seeking grant of 20 years' time for telecom companies to pay off their dues on account of the SC verdict interpreting the meaning of "Adjusted Gross Revenue" in telecom licenses.

Before adjourning the hearing, the bench comprising Justices Arun Mishra, Abdul Nazeer and M R Shah passed an order stating "We are of conclusive opinion that no self assessment or reassessment of the dues shall be done".

"We order that no exercise of self-assessment/re-assessment to be done and the dues which were placed before us have to be paid as we have affirmed those dues including interest and penalty, as ordered in the judgment. It is shocking and surprising that companies are not paying fraction of revenue earned by them and they are keeping it with them so long", the bench said in the order.

"There are serious kind of violations which have been committed by the companies. We do not appreciate at all the way in which they are acting. In case they indulge in it any further their Managing Director shall be personally responsible for further violation of the Court's order", the Court added.

The bench also asserted that the telecom companies should pay off the penalty and interest as per the October 24, 2019 judgment which allowed the Centre's plea to recover adjusted gross revenue (AGR) of over Rs One Lakh crore from them.

While considering the DoT's plea for time to telecom companies, Justice Arun Mishra observed that 'self-assessment by DoT is in sheer contempt of the orders of the Court'.

Expressing shock at the DoT plea, Justice Mishra asked "Who permitted self-assessment? CAG audit has to be done".

"This is a question of this Court's prestige. Do (telecom) companies feel they are more powerful than court?", Justice Arun Mishra asked.

Justice Mishra asserted that there was no question of going back to the October 2019 judgment, and said that telecom companies are already in contempt of court on account of their default.

Justice Mishra also made strong remarks against the media for critical comments about the AGR verdict. He said that "false, misleading" reports about the judgment were being published.

"Telecom companies are very powerful and that is why they are influencing the newspapers to write stories everyday".

He also warned that the Managing Directors of the companies could be summoned to Court and be sent to jail for contempt of Court.

"Telcom companies have usurped public money and don't want to pay even a fraction of the revenue earned", Justice Mishra commented.

Senior Advocate Kapil Sibal, appearing for Hughes Telecom, requested that recovery may be frozen for time being and time for payment may be allowed in the manner the government is seeking.

On February 14, the bench had directed the companies to deposit the dues by March 17, failing which the Managing Directors were asked to be present in Court on the next date of hearing.

Earlier on January 16, a bench headed by Justice Arun Mishra had dismissed review petitions of telecom firms seeking review of its earlier order asking them to pay Rs 1.47 lakh crore in statutory dues by January 23, saying it did not find any "justifiable reason" to entertain them.

The apex court had on October 24 last year ruled that the statutory dues need to be calculated by including non-telecom revenues in AGR of telcos.

It had upheld the AGR definition formulated by the DoT and termed as "frivolous" the nature of objections raised by the telecom service providers.

According to the New Telecom Policy 1999, telecom licensees are required to share a percentage of their AGR with the government as annual licence fee (LF).

The 1999 policy came after operators made representation to Centre for relief against steep licence fee which they had consistently defaulted since 1994 and an option to licensees to migrate from fixed licence fee to revenue sharing fee was made applicable in the year 1999.

In addition, mobile telephone operators were also required to pay spectrum usage charges (SUC) for use of radio frequency spectrum allotted to them.

Telecos had moved the top court against the Telecom Disputes Settlement and Appellate Tribunal's (TDSAT) order which ruled that certain non-telecom revenues like rent, profit on sale of fixed assets, dividend and treasury income would not be counted as AGR on which licence fee would have to be paid to government.

The TDSAT had exempted a large number of streams from the definition of AGR, like capital receipts, bad debt, distribution margins to dealers, forex fluctuations, sale of scrap and waiver of late fee.

It had also said revenue from non-core sources such as rent, profit on sale of fixed assets, dividend, interest and miscellaneous income must be included while computing a carrier's AGR, dealing a setback to telecos who would have to shell out more towards licence and spectrum usage fees.