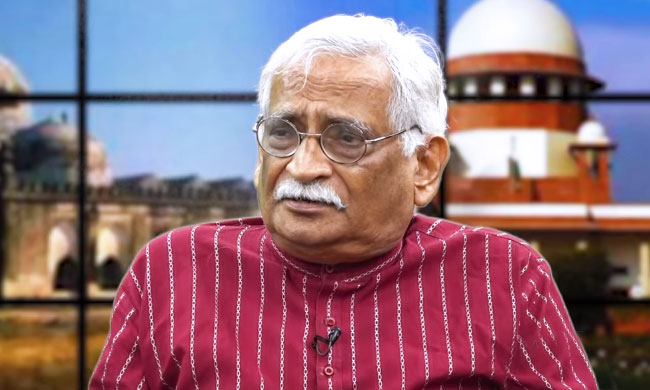 The Constitution Bench of the Supreme Court hearing the Ayodhya-Babri case on Tuesday issued notice to one Professor Shanmugham in the contempt petition filed by Senior Advocate Rajeev Dhavan.]

The Court has however dispensed with the personal appearance of the Professor.

The petition was filed last Friday by Senior Advocate Dhavan, alleging that he was threatened for representing Muslim parties in the case.

Dhavan said in the application that he received a letter from the Chennai-based professor N Shanmugham on August 14 threatening him for appearing for the Muslim parties.

The letter purportedly written by the 88 year old professor asked how could Dhavan "betray his faith" by appearing on behalf of Muslims for "their so called right in Ayodhya". The letter uttered curses at the Senior Advocate and stated that he will "pay for his blasphemy".

He added that threatening messages in Whatsapp were sent by one Sanjay Kalai Bajrangi.

"It needs to be mentioned that the petitioner has been accosted both at home and in the court premises with intimidating behaviour by several persons", he said.

The "intimidating letter" interfered with the course of administration of justice by threatening an advocate for discharging his duties, and hence will amount to 'criminal contempt', stated the petition.

As reason for not seeking the mandatory sanction of the Attorney General for initiating criminal contempt, Dhavan cited possible conflict of interest on the part of AG as he had appeared for State of Uttar Pradesh in earlier rounds of the case.

With respect to the Solicitor General, Dhavan said that the SG had taken sides while appearing for UP Government in the earlier hearing of the present case.

The Constitution Bench of the Supreme Court has completed 17 days of hearing in the case so far.