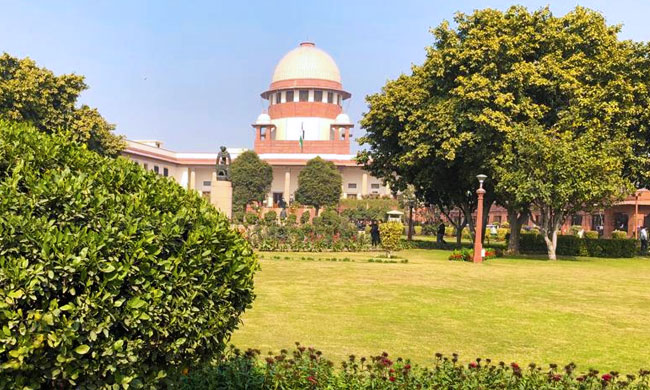 The SC bench headed by Chief Justice of India Ranjan Gogoi passed a slew of directions on Tuesday for improving the conditions of subordinate judiciary in states.It may be recalled that the apex court is supervising the conditions of subordinate judiciary in the ongoing Malik Mazhar Sultan case.Noting that there is "gross deficiency" in the release of central funds towards ...

The SC bench headed by Chief Justice of India Ranjan Gogoi passed a slew of directions on Tuesday for improving the conditions of subordinate judiciary in states.

It may be recalled that the apex court is supervising the conditions of subordinate judiciary in the ongoing Malik Mazhar Sultan case.

Noting that there is "gross deficiency" in the release of central funds towards judicial infrastructure in the state of Sikkim", the Supreme Court on Tuesday directed the Union Department of Justice to look into the matter and ensure that necessary steps are taken so that the requisite funds are made available to the State for the construction of court halls, residential units, etc.

The bench, also comprising Justices L N Rao and Sanjiv Khanna, observed that the funding pattern in the state is in the ratio of 90:10 (i.e. 90% by the Centre and 10% by the State), and that the figures in Amicus Gaurav Agarwal's report suggest that the release of funds by the Centre is inadequate.

Besides, the court specifically directed the State of Uttarakhand to furnish to the Competent Authority in the Union of India the Utilization Certificate for the past grants to enable further release of funds for completion of the Court Complex at Dehradun. The bench observed that the Dehradun Project has been approved for Rs. 206.78 crores out of which Rs. 65.46 crores is stated to have been released, the share of the Central Government being Rs. 44.79 crores.

"No sooner the Utilization Certificate(s) is made available the process for release of further grants/funds will be initiated insofar as the Dehradun project is concerned", the bench stipulated.

In context of the state of Rajasthan, the court described the judicial infrastructure (court halls and residential accommodation) as "grossly unsatisfactory".

"All that the Court would insist for the present is completion of 234 court buildings as per the schedule indicated and further clearance of proposals for 104 court buildings/halls and proposals for 244 residential accommodation within three months from today. Construction work thereafter will be undertaken and completed at the earliest", directed the bench headed by Chief Justice Ranjan Gogoi, requiring the report of the action taken be to be filed after three months.

Perusing the Amicus's submission, the bench reflected that the process of filling up of vacancies (by way of recruitment/promotion) in all cadres is underway and expected to be be completed by different dates in the months of March, April and July. "We direct that the recruitment process including promotion for the post(s) indicated be proceeded with in the right earnest. All efforts be made to complete the same within the time schedule indicated", the court ordered.

Further, the bench required the the Registrar General of the High Court of Rajasthan to synchronise the selection process for the 4122 vacancies of supporting staff in different grades/cadres (like Ministerial, Stenographer, Driver, Class-IV, etc) with the fresh appointment of Judicial Officers and Judges at different levels

In addition to similar directions to the governments and the High Courts of Andhra Pradesh and Telangana, the bench also urged the states to consider as to whether the present policy of reimbursing rent upto the percentage of the Basic Pay should be modified by payment of the actual rent that is paid by a Judicial Officer for his residential accommodation.

In context of the State of Tripura, the bench was informed that 11 out of 35 posts in the cadre of District Judge/Additional District Judge are presently vacant.

While the apex court requested the Tripura High Court and directed the State of Tripura to complete the process of direct recruitment, the process of promotion to the cadre of DJ/ADJ and Civil Judge (Senior Division) may be undertaken as and when suitable eligible officers are available.

Insofar as the vacant posts in the cadre of Civil Judge (Junior Division) are concerned, the bench required the on- going selection process to be completed by July 31.

On account of the filling up of backlog vacancies, the court accepted the statement on behalf of the High Court of Karnataka that the reservations for women, physically challenged, etc are 'horizontal reservation' and not 'vertical reservation'.

In so far as the state of Kerala is concerned, it was relayed that 91 court halls are needed to accommodate the courts working in government buildings/rented buildings/rent free buildings over and above the 85 court halls recently-constructed.

The bench noted that for as many as 68 court halls, the land is yet to be made available. For 10 court halls, the estimates are under preparation, and there is no clarity as to how many would be needed in the immediate future. Further, no time schedule by which the figure of 91 court halls would be available has been indicated.

In these circumstances, the top directed direct the State of Kerala and requested the Chief Justice of the Kerala High Court to work out and finalise a suitable time frame within which the 91 court halls would be made available and to assess the need for future court halls, as may be.