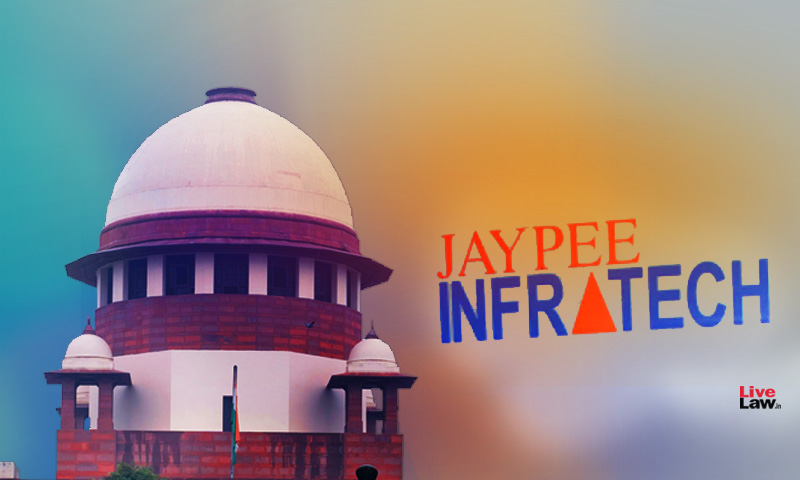 The Supreme Court on Wednesday issued notice in an appeal by 7 homebuyers under Section 62 of the Insolvency & Bankruptcy Code (IBC), 2016 against an order of the NCLAT dated April 22, 2020 whereby the tribunal also directed Jaypee Infratech's Interim Resolution Professional (IRP) Anuj Jain to constitute an interim monitoring committee, comprising representatives of the NBCC and...

The Supreme Court on Wednesday issued notice in an appeal by 7 homebuyers under Section 62 of the Insolvency & Bankruptcy Code (IBC), 2016 against an order of the NCLAT dated April 22, 2020 whereby the tribunal also directed Jaypee Infratech's Interim Resolution Professional (IRP) Anuj Jain to constitute an interim monitoring committee, comprising representatives of the NBCC and its three main lenders IDBI Bank, IIFCL and LIC.

A bench of Justices AM Khanwilkar, Dinesh Maheshwari & Sanjiv Khanna posted the matter for further consideration on August 6 on grounds of urgency, observing that it was keen to hear all Respondents.

On April 22, NCLAT asked state-owned NBCC to implement its proposal in order to acquire debt ridden Jaypee Infratech and complete over 20,000 pending flats, but said the direction is subject to its final order.

The appellant homebuyers have moved the Supreme Court against the NCLAT's direction, which came over an urgent petition moved by the NBCC, after it had won the bid to acquire Jaypee Infratech.

"The Appellants being individual homebuyers are affected by the impugned order and are stakeholders in the instant dispute and are approaching this Hon'ble Court under the provisions of the Code. The impugned order is prejudicial to the Appellants herein who are filing the present permission to file Civil Appeal as the non-implementation of the resolution plan has only prolonged the suffering (being delayed construction, delivery and possession of flats) of the Appellant homebuyers, who have invested their life savings to secure a home."

The Appellants have contended that non-construction of the flats by NBCC is further adding to the woes and miseries of the homebuyers who are now approaching the Top Court for reliefs which may reduce their woes and miseries. "This suffering has further been increased by COVID-19 pandemic because of which the Homebuyers are facing acute financial crisis" the appellants said.

Contending that the impugned order of the NCLAT suffers from infirmities, giving rise to question of law requiring interference under Section 62 of the IBC, the appellants have stated that the the NCLT had approved the Resolution Plan, which is binding on the NBCC, by passing a reasoned order, and hence there was no requirement to constitute the IMC, which has now led to non-implementation of an approved resolution plan.

While hearing petition during the extended lockdown period, a two-member bench headed by NCLAT Acting Chairperson Justice B L Bhat said the IRP would be part of the interim monitoring committee and continue to be paid.

"Meanwhile, till further orders, the approved resolution plan may be implemented subject to outcome of this appeal," said the NCLAT.

"The IRP may constitute an interim monitoring committee comprising the successful resolution applicant, i.e., the appellant and the three major institutional financial creditors, who were Members of the ''committee of creditors," it said.

Jaypee Infratech went into the insolvency process in August 2017 after the NCLT admitted an application by an IDBI Bank-led consortium after which NBCC's proposal was approved by the lenders in the third round of bidding process to find a buyer for Jaypee Infratech.