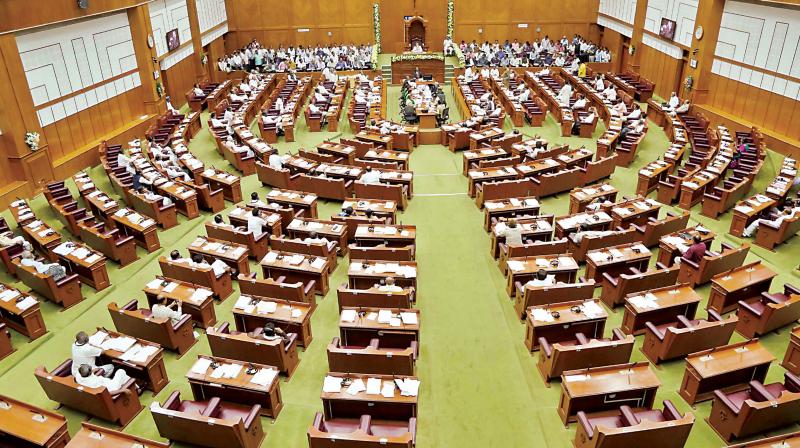 The Supreme Court has issued notice in the plea filed by DMK Leader R. Sakkrapani which seeks for a direction to the Tamil Nadu Assembly Speaker to immediately decide the Disqualification Petition regarding 11 MLAs who had voted against the Tamil Nadu Chief Minister Edappadi K. Palaniswami in 2017. A Bench comprising of Chief Justice of India SA Bobde, R. Subhash Reddy and...

The Supreme Court has issued notice in the plea filed by DMK Leader R. Sakkrapani which seeks for a direction to the Tamil Nadu Assembly Speaker to immediately decide the Disqualification Petition regarding 11 MLAs who had voted against the Tamil Nadu Chief Minister Edappadi K. Palaniswami in 2017.

A Bench comprising of Chief Justice of India SA Bobde, R. Subhash Reddy and AS Bopanna issued notice in the plea. However, they declined to hear the arguments and informed Senior Advocate Kapil Sibal, appearing on behalf of the Petitioner, that the arguments would be heard at length when the matter would be taken up in 4 weeks.

Sibal brought to the notice of the Court that the term of the Assembly would expire in May 2021 and therefore, sought for a short date. However, CJI Bobde responded to the same by stating that May 2021 was far away.

Senior Advocate Mukul Rohatgi attempt to argue against the issuance of notice. However, the CJI prevented him from doing so and informed both the Counsels to argue when the matter is taken up.

On 18th February, 2017, 11 MLAs had voted against the vote of confidence moved by their own party, i.e. AIADMK. These MLAs belonged to O. Paneerselvam faction of AIADMK .

This action was not condoned by the Party, and accordingly, Disqualification Petitions were moved before the Speaker under Para 2 of the Tenth Schedule of the Constitution, seeking for the disqualification of these 11 MLAs. Subsequently, the factions of O. Paneerselvam and E. Palaniswami merged.

Despite the Order rendered by the Supreme Court, the plea filed by Advocate Amit Anand Tiward on behalf of R. Sakkrapani, DMK Chief Whip in the Assembly, contends that nothing has been done over the past 4 months. It has further been averred that there is an outer limit of three months for a decision to be taken in respect of disqualification petitions as per the dictum in the case of Keisham Meghachandra Singh v. The Hon'ble Speaker Manipur LegislativeAssembly & Ors (2020).


The petition states that the inaction of the Speaker is "arbitrary and violative of Article 14, Article 19, Article 164(1B), Article 191 and the Tenth Schedule of the Constitution of India, and in the teeth of the judgements of this Hon'ble Court."

The failure of the Speaker to take even a single step towards deciding the disqualification petition flouts "not only the letter, but also the spirit of the Order of this Hon'ble Court".

The plea further refers to the case of Rajendra Singh Rana v. Swami Prasad Maurya (2007) to put forth the contention that where persons have committed an act of defection, "their continuance in the Assembly even for a day would be illegal and unconstitutional and their holding office as Ministers would also be illegal at least after the expiry of six months from the date of their taking charge of the offices of Ministers".

The plea states that, in the instant case, it is evident that the Respondents have committed an act of disqualification, and therefore, are not entitled to continue as members of the Legislative Assembly.

It has been averred in the petition that the Speaker is deliberately evading the decision, despite being ordered to do so by the Supreme Court, thereby abdicating his constitutional duty.

"The entire objective of the Speaker's inaction for almost three years is to see that the proceedings are not taken up till the entire period of the Legislative Assembly comes to pass, so that the Disqualification Petition is rendered infructuous".

In light of the above, and as the entire term of the Legislative Assembly will come to an end by the time the matter is finally decided, the Petitioner says he has been constrained to move the Supreme Court.

The matter is now listed after 4 weeks.