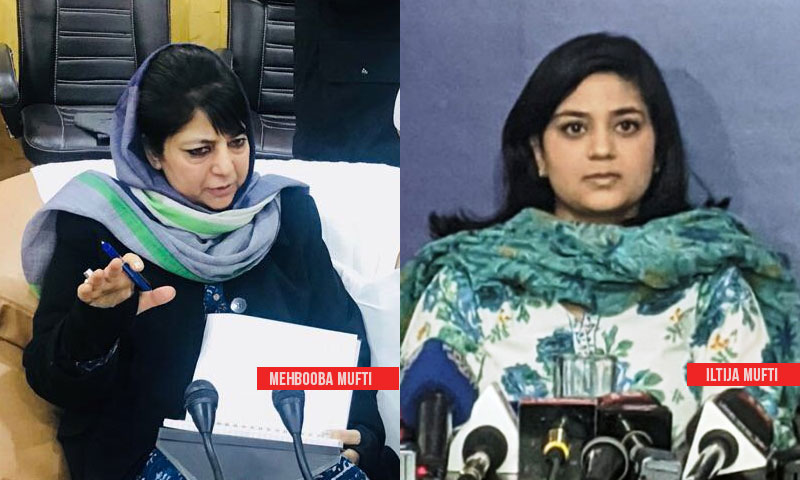 x
While passing an order, Justice Mishra noted that notice shall be issued on the said Petition on the condition of filing affidavit in terms of whether any other Petition has been filed in any High Courts

The Supreme Court on Wednesday issued notice on the habeas plea moved against the Detention Order dated February 5, passed by the District Magistrate of Srinagar under the Public Safety Act, 1978, against former Chief Minister of the State of Jammu and Kashmir, Mehbooba Mufti.The matter was considered by a bench comprising Justices Arun Mishra, Vineet Saran and M R Shah.Counsel for...

The Supreme Court on Wednesday issued notice on the habeas plea moved against the Detention Order dated February 5, passed by the District Magistrate of Srinagar under the Public Safety Act, 1978, against former Chief Minister of the State of Jammu and Kashmir, Mehbooba Mufti.

Counsel for the Petitioner Nitya Ramakrishnan apprised the court with the order dated 05.02.2020 and submitted that the dossier contained no valid grounds for the detention of the former CM.

"Only personal remarks are in this order. Cheap politics is one of their grounds!"

The Bench "Why can't you go to the High Court?"

To this Ramakrishnan asserted- "Your lordships have entertained other writs on the same context."

At this juncture, Justice Arun Mishra stated that an affidavit in terms of whether any other Petition in any High Courts has been filed was required to be filed.

While passing an order, Justice Mishra noted that notice shall be issued on the said Petition on the condition of filing affidavit as aforementioned.

The plea filed by Mufti's daughter Iltija states that the detention order has come when Mufti is already under detention since August 5, 2019.

Iltija has submitted that the impugned detention order which is substantially based on the 'dossier' prepared by the Senior Superintendent of Police, Srinagar is replete with personal remarks in bad taste. The "grounds" stated in the order are crammed with deprecating words like Scheming, hard headed, short lived marriage, Daddy's Girl, etc.

"the Impugned Detention Order is wholly based on the Impugned Dossier which is manifestly biased, slanderous and libelous against the Detenu and which no reasonable person ought to rely on for depriving a citizen of her fundamental freedoms and person liberty," she said.

She has further submitted that the foremost reason cited for continued detention, now under PSA was that the six months maximum period of detention under section 107 and 117 CrPC was expiring on the very day the Impugned Detention Order was passed, and that the Detenu had declined to sign a bond or "surety". She pointed out that the bond contained a blanket undertaking that Mufti will not to make any comment on the recent events in the State.

"This bond and surety which she was repeatedly asked to sign, the records would show,interalia included the promise that: "In case of release from detention, I will not make any comment(s) or issue statement(s) or make public speech(s) hold or participate in public assemblies related to the recent events in the State of Jammu and Kashmir, at the present time, since it has the potential of endangering the peace and tranquility and law and order in the State or any part thereof," the plea read.

Opposing such a blanked ban on Mufti's speech, Iltija asserted,

"On this count alone, the Detention Order should be set aside, for, preventive detention, tolerated by our polity and jurisprudence as a necessary evil, is not meant to stifle legitimate opposition to state policy."

Mufti, along with other prominent leaders of the erstwhile state of J&K was placed under preventive detention on August 5 last year, at the time of abrogation of Article 370 of the Constitution. As per Section 116(6) proviso in CrPC, the same was due to expire in six months, i.e. on February 5, 2020.

Iltja submitted that another reason cited in the impugned dossier was that Mufti had opposed the abrogation of Article 370 as unconstitutional. This, she asserted, clearly amounted to punishing and preventing "legitimate expression".

"The unconstitutionality of the purported abrogation of Article 370 is a common view held by many legal scholars and political scientists and many articles and writings have published taking the same view. Ex facie it is legitimate expression that is sought to be punished and prevented vide the Impugned Detention Order.

… This cannot be justified as "reasonable objective basis for subjective satisfaction" as required by the statute and as interpreted by this Court in several judgments." she said.

Inter alia, she pointed out the dossier cited instances and utterances made by Mufti over the last decade without details and that the Impugned Detention Order was a "simplicitor gag order in the guise of a preventive detention order".

"the grounds are not only stale, for they refer to utterances admittedly made with no adverse consequences to law and order, butare also vitiated fornon-application of mind insofar as they fail to show to why thesaid utterances pose a threat to public order. Other than a bald statement, not a single instance of any public disturbance has been cited. Nor is there any application of mind as to why such utterances if they contravene any law, cannot be managed by the normal criminal process," she submitted.

On this note, she asserted that there was nothing to show that Mufti had been "acting in a manner prejudicial to the maintenance of public order" and thus, the impugned order was violative of Section 8(3)(b) of the PSA and Articles 14, 19, 21 and 22 of the Constitution.

With these submissions, Iltija has prayed that the impugned order be quashed and that a writ in the nature of Habeas Corpus be issued, commanding the state authorities to set Mufti at liberty.