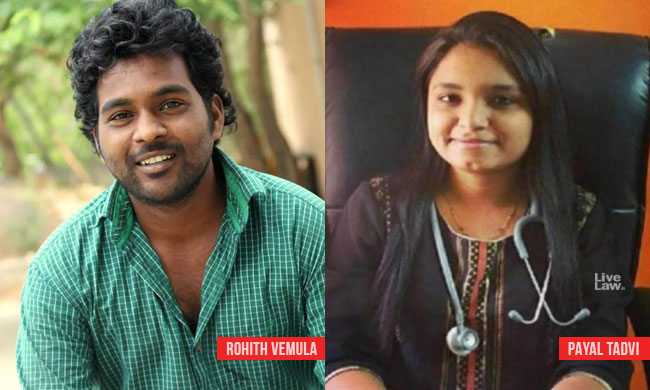 The Supreme Court on Friday issued notice in a PIL filed by the mothers of Rohit Vemula and Dr.Payal Tadvi for seeking measures to end caste discrimination in higher educational institutions.The bench comprising Justices N V Ramana and Ajay Rastogi asked Senior Advocate Indira Jaising, who appeared for the petitioners, as to the need for orders from Court when UGC regulations against...

The Supreme Court on Friday issued notice in a PIL filed by the mothers of Rohit Vemula and Dr.Payal Tadvi for seeking measures to end caste discrimination in higher educational institutions.

The bench comprising Justices N V Ramana and Ajay Rastogi asked Senior Advocate Indira Jaising, who appeared for the petitioners, as to the need for orders from Court when UGC regulations against caste discrimination are already in place.

Jaising replied that the rules are not implemented. Equity Commissioner, as mandated by the UGC, have not been appointed in 288 Universities, submitted the senior counsel.

The bench then proceeded to issue notice to the Central Government and the UGC.

The petition stated that there was a rampant prevalence of incidents of caste discrimination against members of the SC, ST community alongside institutional apathy to caste – based discrimination and flagrant non – compliance with the existing norms and regulations in place. Furthermore, the norms are inadequate insofar as they do not properly address the occurrence of caste - based discrimination on campus against both teachers and students, fail to provide an independent, unbiased complaint redressal mechanism and do not provide for any punitive sanction on Higher Educational Institutions ("HEI") for failure to take positive steps to prevent discrimination on the basis of caste on campusThe petitioners also submit that an independent study done by Insight Foundation of New Delhi headed by Anoop Kumar, in 2012 had compiled a list of 19 suicides of students from Dalit-Adivasi-Bahujan communities who had committed suicide in various Higher Educational Institutions in the country from the year 2007 to 2012.

"The frequent episodes of caste discrimination demonstrate that the state has not only completely failed to protect the fundamental rights of the SC/ST/OBC students, faculty and employees on campus but also refused to take action against the perpetrators of these incidents. In multiple incidents it is noted that Universities have refused to take action against incidents of caste-based discrimination or have been perpetrators of such discrimination themselves resulting in the institutionalised form of discrimination on the basis of caste. It is also noticed that the UGC has abdicated its responsibilities by turning a blind eye to multiple lapses of universities by failing to enforce existing regulations in Universities and not developing effective mechanisms to combat caste based discrimination", the petition stated.

According to petitioners "UGC, (Promotion of Equity in Higher Educational Institutions) Regulations, 2012" do not provide for an independent mechanism of grievance redressal since the Anti- Discrimination Officer under the regulations and the Appellate Authority, are both the Professor/ Associate Professor and the head of the institution respectively. This has a chilling effect on the students who may fear adverse consequences if they raise complaints against the administration.

The petitioners seek a direction to strictly ensure enforcement of and compliance with the UGC, (Promotion of Equity in Higher Educational Institutions) Regulations, 2012 dated 17.12.2012 issued by UGC ("UGC Equity Regulations").

Petitioners also seek a direction to all Universities and HEI's to establish Equal Opportunity Cells on the lines of such other existing anti-discrimination internal complaints mechanisms and to include members from the SC,ST communities and independent representatives from NGO's or social activists to ensure objectivity and impartiality in the process.

Another prayer is for direction to all Universities to take strong disciplinary action against victimization of students/staff who file complaints alleging caste based discrimination and to take necessary steps in the nature of interim reliefs that restrain the HEI from creating a hostile environment against students who file such complaints.

Rohit Vemula, a PhD Scholar at University of Hyderabad working for rights of the Dalit community, was a member of the Ambedkar Students Association. He committed suicide after he was suspended from his campus residence on the basis of a complaint by ABVP branding him as casteist and anti – national.

Dr. Payal Tadvi, a tribal student of TN Topiwala National Medical College committed suicide on 22.05.2019 after being subjected to caste based discrimination by her Upper caste peers in the College.