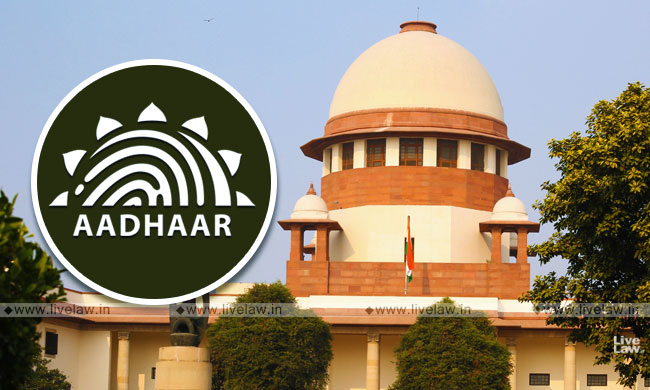 The Supreme Court on Friday issued notice to the Central Government and the Unique Identification Authority of India (UIDAI) on a petition questioning the constitutional validity of the Aadhaar and Other Laws (Amendment) Act 2019, which allows private entities to use Aadhaar data of citizens.

A bench comprising Chief Justice of India S A Bobde and Justice B R Gavai was considering a petition jointly filed by ex-armyman S. G. Vombatkare and activist Bezwada Wilson which contends that the amendment creates a backdoor to permit private parties to access the Aadhaar eco-system, thus enabling State and private surveillance of citizens.

The impugned provisions permit the commercial exploitation of personal and sensitive information which has been collected and stored for State purposes only, contended the petitioners.

Firstly, it is argued that the amendments seek to re-legislate the provisions of the Aadhaar Act, 2016 which were specifically declared unconstitutional in the 2018 constitution bench judgment of the apex court. In the judgment delivered on September 26, 2018, the SC had struck down Section 57 of the Act to the extent it allowed private entities to use Aadhaar data for authentication of identity on the ground that it amounted to infringement of right to privacy.

Secondly, it is contended that the Aadhaar database lacks integrity as none of the data uploaded at the time of enrollment is verified by anyone. Permitting such a database to be Iinked with the existing databases of services offered under Chapter IV of the Prevention of Money Laundering Act, 2002, and Section 4 of the Indian Telegraph Act, 1885, poses a grave threat to national security by permitting unverified data to creep into these databases.

Thirdly, the amendments creates a new system of 'offline verification' that purports to bypass the UIDAI.

The Amendment Act was passed by the Parliament last July in the monsoon session. It amends Indian Telegraph Act 1855 to provide for "voluntary use" of Aadhaar number for identity verification for obtaining mobile connections. It also amends the Prevention of Money Laundering Act to permit "voluntary use" of Aadhaar for identity verification by banks before opening bank accounts. It may be noted that the the circular issued by the Department of Telecommunications on March 23,2017 mandating compulsory linkage of mobile numbers with Aaddhar was struck down by the SC on the ground that the circular had no statutory backing.

The PMLA(Maintainence of Records)(Second Amendment) Rules brought by the Government in 2017 mandating the linking of bank accounts with Aadhaar was also struck down by the SC in 2018.  The Court said that compulsory use of Aadhaar based KYC for mobile connections and bank accounts cannot be permitted.

The amendment permits offline verification of Aadhaar number for identification purposes. As per the original Act, Aadhaar number without electronic authentication cannot be used to verify identity.