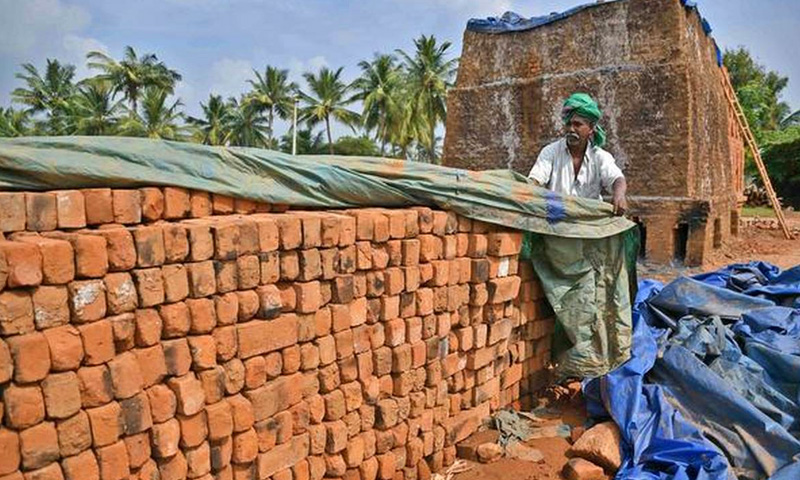 The Supreme Court on Wednesday issued notice on a PIL seeking urgent release and rehabilitation of 187 victims of bonded labour (including pregnant women, children and infants) who are being held at three different brick kilns in the States of Bihar and Uttar Pradesh. The bench of Justices L. Nageswara Rao and Ravindra Bhat was hearing the plea of social worker Zahid Hussain alleging that...

The Supreme Court on Wednesday issued notice on a PIL seeking urgent release and rehabilitation of 187 victims of bonded labour (including pregnant women, children and infants) who are being held at three different brick kilns in the States of Bihar and Uttar Pradesh.

The bench of Justices L. Nageswara Rao and Ravindra Bhat was hearing the plea of social worker Zahid Hussain alleging that the victims of bonded labour are being made to do hard physical labour in inhuman conditions, including extreme heat, with only one meal a day.

The Petition also seeks urgent directions from the Court to specifically formulate guidelines for rescue, protection and rehabilitation of bonded labourers during the covid-19 pandemic. It may be noted that Coming to the rescue of various brick kiln workers stranded in the state, the Telangana High Court has issued a slew of directions to the State Government to ensure that the workers are transported back to their native places and in the interregnum, are provided with adequate facilities to lead a dignified life.

"Even after the enactment of the Bonded Labour Abolition Act, 1976, millions of adults and children across India are enslaved by the scourge of Bonded Labour, albeit in forms that continue to change...The Covid-19 pandemic and the resultant nation-wide lock-down has intensified every factor of vulnerability that bonded labourers are ordinarily subjected to. From increased isolation to restriction of movement, lack of food supplies, lack of healthcare, non-payment of wages and restricted access to law enforcement authorities, the Covid-19 pandemic has severely exacerbated the abusive conditions that bonded labourers are trapped in. It has also pushed persons who were not originally working in a state of bondage, into a state of bonded labour", it is submitted.

No Action by the NHRC

The plea avers that on May 8, the Petitioner with the assistance of a civil society organisation filed three written complaints before the National Human Rights Commission (NHRC) alleging that 45 families [187 persons] were being exploited for illegal bonded labour at brick Kilns by the brick kiln owners. On May 11, the NHRC took cognisance of the aforesaid complaints, issuing urgent directions to the respective District Magistrates of Sambhal, U.P. and Rohtas, Bihar to depute a team of officers for conducting a spot inquiry and file an action taken report in the matter within 15 days. The NHRC in the said order specifically mentioned the fact that there are many pregnant women among the bonded labourer families in all 3 cases who are being forced to work by the owners of the said brick kilns and are in urgent need of rescue/ release, relocation, food and stay. Even after the order was communicated to the Sambhal local district administration, the administration has not concluded their spot inquiry by granting release certificates to the 62 victims. After a further representation by the petitioner, the District Administration through the Labour Enforcement Officer, Sambhal, conducted a very perfunctory enquiry of all the 17 families. Despite the spot enquiry, the administration of Sambhal District has asked the labourers to continue to remain at the brick kiln at the mercy of the brick kiln owners/ traffickers.

The district administration has not made sufficient arrangements to move the labourers to an alternate safe location, arrange for their release certificates, ensure the payment of wages and access to healthcare and ration for the labourers. The labourers are left vulnerable to being tortured by the brick kiln owners for complaining against them and the owners have threatened to throw the labourers out without any payment for their labour.

In other 2 cases, the office of District Magistrate, Rohtas has not taken any steps towards conducting the spot enquiry in both cases of Rohtas district and the laborers, including the pregnant women in both brick kilns, are forced to work long hours under terrible conditions and without statutory wages.

The petition urges that the Bonded Labour Act, 1976 and the Standard Operating Procedures (SOP) on Rescue, Release, Ministry of Labour and Employment (MoLE), Govt. of India, contemplate that bonded labourers have to be released forthwith, and provide for a 24-hour timeline of rescue after the receipt of a complaint. In the present case, this statutory requirement has been entirely overlooked, and despite the existence of bonded labour having been brought to the attention of the respondent authorities, no action has been taken till date.

Section 4 of the Bonded Labour Act is cited, which reads that On the commencement of this Act, the bonded labour system shall stand abolished and every bonded labourer shall stand freed and discharged from any obligation to render any bonded labour. Section 12 of the Act, places a duty on the District Magistrate to act forthwith to eradicate the enforcement of such labour.

The provisions of the August, 2017 SOP place an obligation on the DMs/SDMs or the Police to conduct rescue operations within 24 hours of receiving the complaint.

It is averred that the addendum dated 17th January 2017 to the Central Scheme on rehabilitation of bonded labourers increases the immediate assistance up to Rs.20,000/- to be given to the rescued bonded labour/ survivor. "These provisions of the CS Scheme have also not been complied with in the present case", it is argued.

The Petitioner states that it is incumbent upon the Respondent State Authorities to formulate a Covid-19 response action plan to address bonded labour and child labour across the country which takes the following considerations into account:

a. Ensuring that bonded labourers do not suffer physical and/or sexual violence and that they are released to safe locations by taking all Covid-19 related precautions including social distancing measures.

b. Ensuring that release orders and compensation already ear marked for bonded labourers under the CS Scheme is swiftly granted to bonded labourers to allow survivors to tide over the lack of alternate employment during covid-19 time.

c. Access to healthcare for survivors who need urgent medical attention, and access to medical essentials such as masks and sanitisers.

e. All owners engaging bonded labour are directed to release unpaid/ back wages to labourers for failure to pay statutory minimum wage in accordance with law.

f. Take steps to ensure safe repatriation to source states or village where the labourers are trafficked from keeping in line with the travel measures allowed by the Union and State governments during the Covid-19 pandemic.

g. Police complaints are registered against owners and agents who engage in bonded labour trafficking.