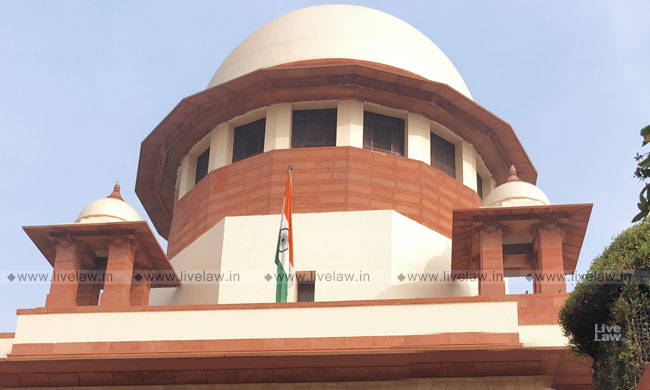 The Supreme Court on Monday issued notice on an an application seeking a clarification that the earlier order of top court extending the limitation period with effect from March 15 does not cover the time limit prescribed under Section 167(2) of the Code of Criminal Procedure for grant of bail.A bench of Chief Justice SA Bobde, Justices AS Bopanna & Hrishikesh Roy deliberated on whether...

The Supreme Court on Monday issued notice on an an application seeking a clarification that the earlier order of top court extending the limitation period with effect from March 15 does not cover the time limit prescribed under Section 167(2) of the Code of Criminal Procedure for grant of bail.

A bench of Chief Justice SA Bobde, Justices AS Bopanna & Hrishikesh Roy deliberated on whether the same could be done while hearing its suo motu case pertaining to the issue of extension of limitation periods during lockdown.

The applicant plea prays for a clarification in as much as whether the earlier order of March 23 passed by the court (wherein it extended the limitation period, whether condonable or not, with effect from March 15, until further orders).

"In the event the non applicability is not clarified the divergent interpretation by the subordinate courts would result as a order of detention against the remand prisoners, thereby violate their Fundamental Right under Article 14 and 21 of the Constitution of India"

Further, the applicant prays that the "confusion" and "uncertainty" regarding applicability of the March 23 order to Section 167(2) of the Cr.P.C is affecting a large number of prisoners as they have not been released by the magistrates as per the mandate of the law.

According to the plea, the bail applications are being adjourned across the country in the present lockdown situation and that the current interpretation has resulted in defeating the accrued right of default bail which is enunciated under Section 167(2) of the CrPC.

To substantiate this "confusion", the applicant cites conflicting orders passed by various High Courts wherein the Bench has pondered over the issue of filing of final report even after the period specified period of 90 days.

The question to be considered in a reference by the HC of Madras is,

In light of this, the plea contends that "such course of action at the hands of the larger Bench of the Hon'ble Madras High Court is impermissible as in any event it would amount to tinkering the order of this Hon'ble Court."

"Section 167(2) of the Cr.Pc which is an enabling provision of the trial court to grant bail in the event the final report is not filed within 60 or 90 days. No Magistrate can however authorise the detention of the accused person in custody beyond this period, he has no other option but to release the accused on bail even without an application if he is prepared to and does furnish bail"- Excerpt of Plea

On May 6, extended the limitation period for statutory provisions under Section 138 of the Negotiable Instruments Act & the Arbitration & Conciliation Act with effect from March 15 until further orders.

On March 23, with the objective of reducing physical filings in courts and tribunals across the countries during the COVID-19 pandemic, the Supreme Court passed a general order extending the limitation, whether condonable or not, with effect from March 15, until further orders.

"To obviate such difficulties and to ensure that lawyers/litigants do not have to come physically to file such proceedings in respective Courts/Tribunals across the country including this Court, it is hereby ordered that a period of limitation in all such proceedings, irrespective of the limitation prescribed under the general law or Special Laws whether condonable or not shall stand extended w.e.f. 15th March 2020 till further order/s to be passed by this Court in present proceedings".

The application has been filed by Advocate  A Velan and Advocate on Record A. Laxminarayan.