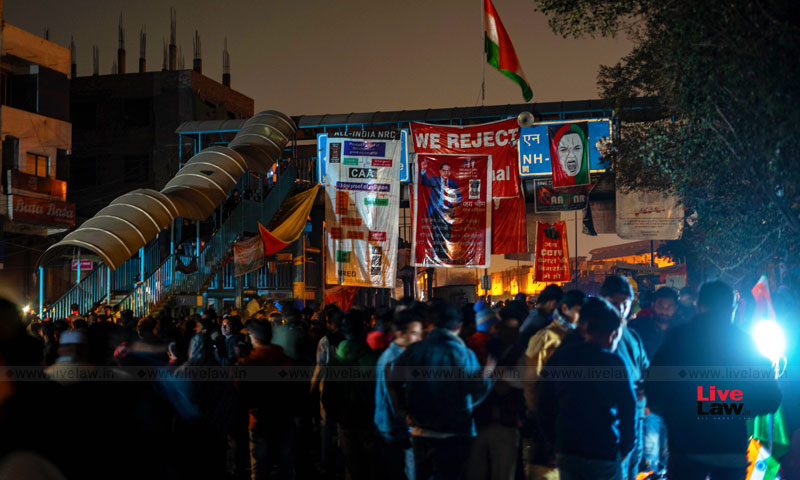 x
'There cannot be indefinite protests in a common area', the bench orally said.
Your free access to Live Law has expired
To read the article, get a premium account.

The Supreme Court on Monday issued notice to the Central Government on petitions which seek the clearance of the ongoing protests against CAA-NRC at Shaheen Bagh in Delhi.

A bench comprising Justices S K Kaul and K M Joseph however declined the petitioners' prayer for interim directions for removal of the protesters.

While hearing the petitions filed by Amit Sahni and Nand Kishore Garg, Justice Kaul orally remarked "protests can carry on, but it should be done in an area which is designated for protests. You cannot inconvenience people".

"There cannot be indefinite protests in a common area. If everybody starts protesting everywhere, what will happen? ", Justice Kaul continued.

The bench then proceeded to issue notice to the Centre, returnable by February 17.

"Protests have been going on for 50 days. It can go on a little longer. We would like to hear the other side", commented Justice Kaul.

One of the the petitioners, a lawyer named Amit Sahni, had taken his grievance to the Delhi High Court where the same was disposed of by asking the authorities to look into it, but without any formal order regarding the same. The HC had disposed of the petition directing the police to "consider" the petitioner's grievances.

The current petition, for Special Leave, has challenged that order.

It has been stated that an "alarming situation" has arisen due to a "blockade" of the road between the Kalindi Kunj and Mathura Road region, which connects Delhi-Noida-Faridabad. This has led to traffic being diverted to the Delhi-Noida-Delhi (DND) flyway, which sees lacs of commuters, and needs to be decongested, he submits. Commuters and "residents living in the vicinity are suffering as the road was closed for about a month", says Sahni.

Raising questions about the justification for the High Court not issuing specific directions on his plea, Sahni goes on to ask if protesters have the unrestricted right under Article 19 to "protest on a busy road in violation of other persons' right to have a thoroughfare". He argues that protesters have the right to peacefully protest but it must be subject to reasonable restrictions and cannot be permitted to continue, as it has been for "over a month", since it creates "disturbance to public at large thereby resulting in wastage of fuel, time and energy of lacs of commuters travelling daily".

Calling the situation "extremely sensitive", the petitioner urges that the Respondents (administration) cannot be "mute spectators" in such circumstances. Claiming also that protesters have been using loudspeakers, according to reports, in addition to disturbing public tranquility and obstructing traffic, it has been asserted that protests cannot be permitted to go on "for an indefinite period to make other suffer for the same." Sahni finally argues that it is the duty of the Court to strike a balance between competing claims of different interests.