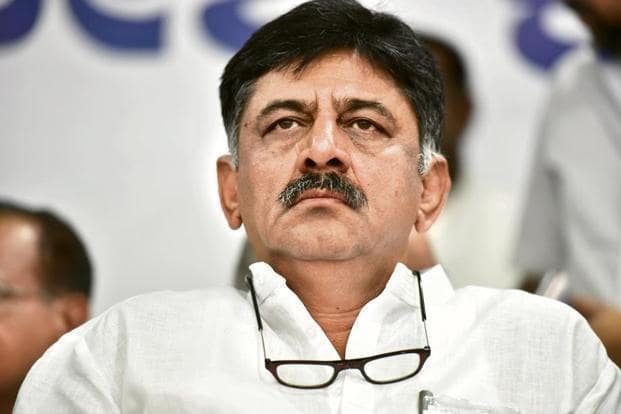 The Supreme Court on Monday issued notice in a plea filed by Karnataka Congress President, DK Shivakumar, urging the removal of charges filed against him by the Income Tax (IT) Department. A 3-judge Bench headed by Chief Justice SA Bobde, along with Justice Bopanna and Justice Ramasubramanian, however, refused to stay criminal proceedings which had been initiated against...

The Supreme Court on Monday issued notice in a plea filed by Karnataka Congress President, DK Shivakumar, urging the removal of charges filed against him by the Income Tax (IT) Department.

A 3-judge Bench headed by Chief Justice SA Bobde, along with Justice Bopanna and Justice Ramasubramanian, however, refused to stay criminal proceedings which had been initiated against the former Karnataka Minister subsequent to a raid of his premises in August 2017.

The Court asked the IT Department to file a reply regarding why Shivakumar may not be granted relief, and posted the matter after 4 weeks.

Shivakumar has moved a Special Leave Petition before the Apex Court challenging a Karnataka High Court order from November 2019, wherein his appeal to be discharged from the case registered by the IT Department was turned down.

The Criminal Review Petition in High Court had been preferred by the Congress leader as the Additional Sessions Judge, Bengaluru, had denied him relief in a case of undisclosed assets and tax evasion, registered under provisions of the Income Tax Act and Indian Penal Code.

In the present plea, it has been contended that the IT Department cannot treat an amount found during the course of a search as concealed income without waiting for the Assessee to file his Return of Income.

Under the Income Tax Act, 1961, it is argued, criminal prosecution may only be initiated if the Assessee's explanation regarding acquisition of money is found to be unsatisfactory. However, the Department chose to initiate proceedings against Shivakumar without waiting for returns to be filed and without an assessment order being passed after considering his submissions, asserts the petition.

"The amount found can be treated as the assessee's income only if the conditions laid down by Section 69A of the Act are fulfilled, i.e- that the Assessing Officer finds the assessee's explanation about the nature and source of acquisition of the money to be unsatisfactory. Such a finding can be given by the Assessing Officer only by passing a reasoned assessment order. Consequently, unless and until such an assessment order has been passed, the amount found cannot be considered to be income.

Even if that amount is found to be income under section 69A, it would be the income of the current accounting year during which the amount was found, for which the assesse is yet to file his Return of Income. Consequently, until the Return is filed and the said amount is found not to be disclosed therein, the assesse cannot be charged with concealment of income."

In this light it is argued that a criminal prosecution for concealment of income could not have been initiated legally by the IT Department at the stage when it was initiated.

The Court's attention has also been drawn to a 'clarificatory Circular no. 24 of 2019', issued by Central Board of Direct Taxes (CBDT), wherein it is laid down that prosecution may be initiated only when a penalty for concealment has been imposed, and that penalty has been upheld by the Appellate Tribunal.

These conditions are not met in the present case, argues the petitioner, by pointing out that criminal prosecution was initiated on 13.06.2018 on the basis of a sanction granted by Principal Director of IT (Investigation, Bengaluru) on 28.05.2018, when none of the parties charged with concealment of income had filed their Return, for which time was available till 30th September/October, 2018.

"Consequently, the sanction for the prosecution would also have been vitiated by non-application of mind", submits the petitioner. Stressing
that the 'crucial CBDT circular' as not in play at the time of a 1984 judgment, which was relied upon by the Trial Court while denying relief, it is contended that the High Court "erred patently in law in upholding the rejection of the Petitioner's Application for discharge."

With regard to sanction, Shivakumar additionally argues that the Principal Director did not have authority to grant the same. It is submitted that Section 279A of the IT Act mandates the grant of sanction by the Commissioner and not the Director.

"In the scheme of the Act, the Commissioner and the Director are distinct statutory officers, covered by distinct statutory provisions. For this independent reason also, the prosecution initiated against the Petitioner was bad in law."

Senior advocate Mukul Rohatgi appeared in Court for Shivakumar along with S. Ganesh, in the petition filed by AOR Parmatma Singh.