SC Issues Notice To Lawyer Who Claimed That He Was Offered Rs 1.5 Crores To Frame Allegations Against CJI [Read Order] 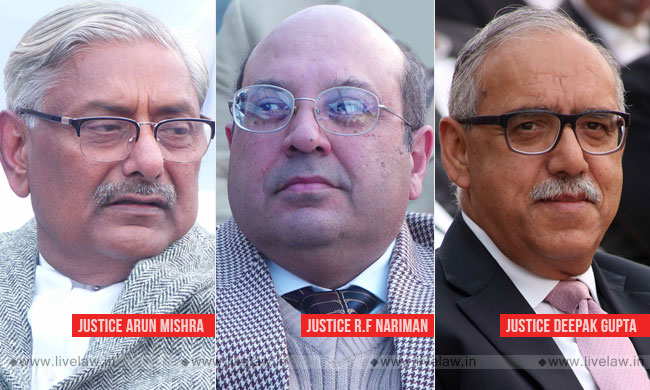 The Supreme Court deferred to Wednesday the much-hyped hearing in the suo motu cognizance taken by it of the sexual harassment allegations leveled by a former employee against Chief Justice Ranjan Gogoi. As the three-judge bench headed by Justice Arun Mishra convened in a packed courtroom on Tuesday, the judge inquired at outset if Advocate Utsav Bains, having filed an affidavit...

The Supreme Court deferred to Wednesday the much-hyped hearing in the suo motu cognizance taken by it of the sexual harassment allegations leveled by a former employee against Chief Justice Ranjan Gogoi.

As the three-judge bench headed by Justice Arun Mishra convened in a packed courtroom on Tuesday, the judge inquired at outset if Advocate Utsav Bains, having filed an affidavit contending that he was offered bribe in consideration of his assistance in framing the CJI, is present in the court.

After the court addressed the allegations as a matter of "great public importance" in an urgent hearing on Saturday, regarding them an attack on the independence of the judiciary, The Harvard-educated lawyer had in a Facebook post claimed that he was offered Rs.1.5 crores by 'fixers' to frame Chief Justice Gogoi in the sexual harassment allegations. He claims to be the grandchild of a retired HC judge and the son of a senior lawyer of the Punjab and Haryana High Court, from where CJ Gogoi was elevated to the Apex Court.

In his absence, the bench issued notice to the advocate, requiring him to produce evidence in support of the averments in paragraphs 17 and 20 of his affidavit, adjourning the matter for Wednesday.

In an affidavit filed by Advocate Utsav Bains in the suo moto proceedings taken by SC in respect of the allegations against CJI, he has stated that on April 4, an unknown person, who introduced himself as 'Ajay' approached him and told that his relative - the former Junior Court Assistant- was sexually harassed by the CJI and that the ex-SC staff and her family were being persecuted by the CJI.

Bains said he did not feel convinced about the truth of the allegations, when 'Ajay' gave evasive answers to queries about the victim-woman. 'Ajay' then suddenly changed track and requested Bains to arrange a press conference to air the allegations against the CJI, and offered Rs. 50 lakhs, said the affidavit. When Bain expressed reluctance, the offer was hiked to Rs.1.5 crores, the affidavit added.

The affidavit went on to state that the enquiries made by Bains revealed that this was a plot by 'fixers'.

"The Deponent was informed by reliable sources that certain 'Fixers', who claim to be engaged in illegally managing Judgements in exchange for cash are behind this plot as the Hon'ble CJI has taken decisive action to crack down on such fixers"

"The source told the Deponent that Romesh Sharma also ganged up with disgruntled employees and former employees of the Supreme Court, who actively conspired to frame the Hon'ble Chief Justice of India in the sexual harassment complaint".

Bains has alleged that former Jet Airways owner Naresh Goyal had tried to bribe the CJI through "Romesh Sharma", who was introduced to Goyal by Bombay blasts case accused Dawood Ibrahim.

He has offered to furnish more details in a "sealed cover", and said that he cannot share names of sources as they are "privileged communications under Advocates Act".

Bains also expressed fear for his life and said that "the Deponent is aware that his life will come under imminent danger after filing of this affidavit due to the established connections of Romesh Sharma and Naresh Goyal with Dawood Ibrahim".

Bains had made a Facebook post on this issue on April 20 at 6.50 PM, where he said that he will file an affidavit in SC with evidence of "conspiracy against the CJI by a lobby of disgruntled judges, SC fixers, corporate scamsters and a few corrupt Politicians - All who have meticulously planned the conspiracy to force the CJI to resign as their 'Corrupt works were not going through in SC".

Contrary to the claim made in the Facebook post, Bains's affidavit filed in SC has no mention of alleged lobby of disgruntled judges and corrupt politicians.

As per information from his FB post, he is the grandchild of a retired HC judge and son of a senior lawyer of Punjab and Haryana High Court.