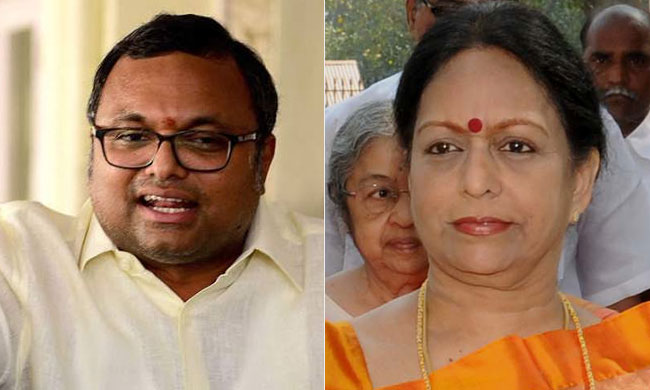 The Supreme Court Tuesday sought responses from Congress leader P Chidambaram's wife Nalini and son Karti on an appeal of the Income Tax department against the Madras High Court order quashing criminal prosecution against them in an alleged blackmoney case.

A bench headed by the Chief Justice Ranjan Gogoi, while issuing notices to the two, made it clear that it will not stay the Madras High Court's 2018 order quashing criminal prosecution against the Chidambarams.

According to the I-T Department, the three had not disclosed a property they jointly owned in Cambridge in the UK worth Rs 5.37 crore in their returns which amounted to an offence under the Black Money (Undisclosed Foreign Income and Assets) Act and Imposition of Tax Act.

The Madras High Court on November 2 last year had said no case was made out and quashed the criminal prosecution.

The department has also alleged that Karti Chidambaram had not disclosed an overseas bank account he holds with Metro Bank in the UK and investments he had made in Nano Holdings LLC, USA.

He had also "failed" to disclose investments made by Chess Global Advisory, a company co-owned by him, which amounted to committing an offence under the Black Money Act, the department had said in its complaint in the special court in May last year.