"We Can't Restrict A Minister": SC Resumes Hearing On Whether Persons Holding Public Offices Have More Restrictions On Free Speech 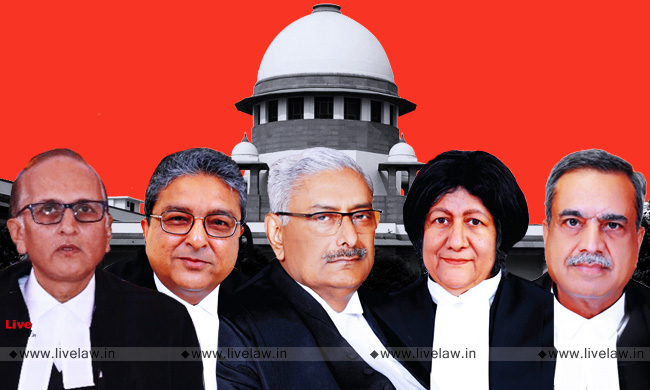 The Constitution Bench of the Supreme Court of India comprising of Justices Arun Misra, Vineet Saran, Indira Banerjee, M. R. Shah and S. Ravindra Bhat resumed the hearing in the case of Kaushal Kishore v. The State of Uttar Pradesh & Anr. The case stems from the Bulandshahar rape incident wherein a Minister of the State, Azam Khan had dismissed the incident as a "political conspiracy...

The case stems from the Bulandshahar rape incident wherein a Minister of the State, Azam Khan had dismissed the incident as a "political conspiracy and nothing else".

"We can't restrain a minister. He is a public functionary. He is supposed to speak! That is the voice of the opposition! The voice of real sense, of what he perceives! We can't have petitions and petitions and petitions coming in this court, claiming violation of fundamental rights under 32! We can't say that this is the punishment and all...We have to examine the facts of a particular case to see if it is correct. We have to settle the law", observed Justice Arun Mishra on Wednesday.

The attention of the Supreme Court 5 judge bench headed by Justice Mishra was drawn to the controversial disparaging remarks made in 2017 by Kerala electricity minister M.M. Mani against women, the media and government officials and whether the same will come within the ambit of free speech.

"These organisations could have sued him...this is different from comments are made during the pendency of an investigation", continued Justice Bhat.

"These statements may be defamatory, but defamatory statements will not affect any trial...the court can't tell them what to say anywhere to say", agreed Justice Vineet Saran.

"The question is whether beyond 19(2), freedom of speech can be subjected to further restrictions? We can't give a code of conduct.

The government will do that in its own way, whether through a code or legislation. We can say that once you take the constitutional oath, you are bound by constitutional values. You can't make disparaging statements. But the government must have its own guidelines. If there is a violation, then we can say something", reflected Justice Mishra.

"The reasonable restrictions are also not to impinge on the right under 19(1). Can it be controlled by any other provision? If yes, to what extent? When does the liability for tort arise? We cannot overreach, like you utter a word and you are liable...Tell us how we can do it. But don't presuppose that we will", said the judge to Advocate Kaleeswaram Raj, appearing for petitioner Joseph Shine.

When Raj indicated the Union Home Ministry's Code of Conduct for Central and state ministers, Justice Mishra pointed out the opening line- "In addition to the observance of the provisions of the Constitution, the Representation of the People Act, 1951, and any other law for the time being in force..."

"Everything will lie in this. 'The Constitution, the RPA and other laws for the time being force' is the main-sole! The Preamble of the Advocate's Act is wider than this...", said Justice Mishra.

"In consonance with the Constitution and the law includes everything, including the minister being fair in his decisions... Certain provisions are more specific when it comes to public servants, you cannot make political speeches, statements to the press...but being in public life means he will comment! It is his job to comment! It is only when he crosses a line...", added Justice Bhat.

"You can't make it a platform for debate. We are only looking to see if we can carve out a small restriction for ministers, otherwise we will paint all Fundamental Rights", continued the judge.

Pointing out the codes of conduct in the UK and Australia, Raj advanced that "conduct, representations and decisions of ministers are open to public scrutiny" and that "ministers must ensure their statements are in consonance with government policy".

While Justice Saran remarked that the former was a "general" provision, Justice M. R. Shah commented, "A minister cant go against government policy because he is a part of the government!"

When Justice Mishra asked what was the punishment under the Indian Code of Conduct, Raj replied that there was none.

"The statement is made outside the House, so not subject to the privilege of the House", added Justice Bhat.

"He can't violate Article 21 rights, which are the basic rights, or the other rights. That is what is meant by 'observance of the provisions of the Constitution'. Our code of conduct is not narrow. It encompasses Article 141, whatever is the law laid down by this court, judgments of this court on other rights.The duty to respect others' rights hasalready been cast. We will not be legislating where the code of Conduct itself takes care", said Justice Mishra.

"It is pointed in the Constitution itself, a statement impinging on the respectability of a person is covered under Article 21 which includes reputation, dignity. The balance has been achieved by the constitution. In each case, we have to reach that balance. Once you say public order or safety, it comprises all 21 rights. Once you evolve a law in the interest of the larger public, you test it on reasonableness, which means you can't over-restrict all of us", articulated Justice Bhat.

"We might have to reframe the question (of reference). Our job is only about constitutional functionaries and not individuals", said Justice Mishra. "226 is in wider language", Justice Bhat expressed, noting the phraseology "for any other purpose" in the Article. "In fact, the Vishakha judgment, which was also followed in the 2013 Act, was only applicable to government authorities. Vishakha was confined to all manner of public life. Now it has been extended to private institutions", added the judge.

"If rights exist, the court can step in. But if there is a gap, the court is not to create a right...But why are you speaking of absence? Presupposing on a negative note? The code of conduct has a wholesome provision on constitution and any other law for the time being in force. The code is general, all provisions of the constitution, the RPA, other laws. It is not restrictive, it is wide", opined Justice Misra.

"After Vishakha, in Association for Democratic Reforms, the court asked legislators to declare their assets. It is not as if this court cannot do something, but what is the limit of it?", asked Justice Bhat.

"As per the code, somebody else has the authority to judge a minister. Our job as of now is not to see what happens when they transgress, but that what are the parameters for that...one may be speaking against the department, but he may not be acting in a collective capacity. When he does a tortious wrong, then is it in his individual capacity or collective responsibility? Government is a collective of persons. the government can be vicariously liable for acts. But when he is speaking, when can it be said to be the vicarious liability of the government?", probed Justice Mishra.

"A statement by a minister in press on a policy or an impending policy is not binding on the government. We can't cast it so wide and extrapolate to the government", added Justice Bhat.

"Look at Article 75(3). A minister doesn't bind the government but is responsible to the Parliament. Not conversible!", interjected Justice M. R. Shah.

"Suppose a minister is speaking on a cabinet decision, it will be binding. But suppose he is going rampant, speaking, and nobody is doing anything under the code of conduct? Can, on account of this inaction to check the in-built balances, it be said that the statements are binding and attach liability? it is a wide issue. It can affect any government for the time being on the basis of the statement of one person. We need more debate and jurisprudence on this binding nature and vicarious liability...", opined Justice Mishra.

"Suppose a person has not understood the policy at all, he has not even read it, and makes a loose statement? Can it be collective responsibility?", continued the judge.

"Collective responsibility is to the House. 75(3) is to the House. Why drag us into this political issue? The constitution says in black-and-white that this is it. How do we bring in all this in 19 now?", pressed Justice Bhat.

"Under what provision can the government be held liable for the statement of a minster? Even B. R. Ambedkar has said that ultimately it is for the PM to take action. 75(3) an 164(2) deal with it", iterated Justice Shah.

"One is public domain and the other is the House. Where the misstatement or that which is inherently wrong happens in the House, the House will regulate. In the public domain, the minister is as much a citizen as a political leader. He has to make statements for his constituents to judge. We can only look in where there are extreme consequences and in the interest of fair trial", stated Justice Bhat.

"Yes. Where others' 21 rights are affected", agreed Justice Shah.