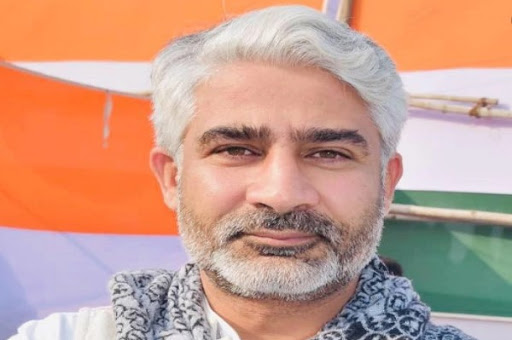 The Supreme Court on Friday refused a plea of Haryana Congress leader Pankaj Punia, arrested by Haryana police on May 20 on a FIR for allegedly "hurting religious feelings" through a Twitter post, for quashing other similar ones lodged in Uttar Pradesh and Madhya Pradesh. After hearing Senior Advocate Sanjay Hedge for Punia, the three-judge bench dismissed the writ petition, observing, "We...

The Supreme Court on Friday refused a plea of Haryana Congress leader Pankaj Punia, arrested by Haryana police on May 20 on a FIR for allegedly "hurting religious feelings" through a Twitter post, for quashing other similar ones lodged in Uttar Pradesh and Madhya Pradesh.

After hearing Senior Advocate Sanjay Hedge for Punia, the three-judge bench dismissed the writ petition, observing, "We are not inclined to entertain this petition filed under Article 32 of the Constitution of India"

The bench of Justices Arun Mishra, Abdul Nazeer and Indira Banerjee, however, granted liberty to the petitioner "to approach the concerned High Court/appropriate Forum".

On the complaint of one Vivek Lamba, a resident of Karnal, Haryana, the Madhuban Police Station had registered a FIR u/s 153, 295-A, 505(2) of the IPC along with section 67 of the lT Act in respect of Puniya's tweet on the evening of May 19.

In his writ petition before the Apex Court, Punia had argued that "there is a growing tendency amongst investigating agencies to file multiple FIRs on the same cause of action", which "allows the state to detain a citizen for prolonged periods, pending an investigation".

"Since these FIRs are often filed in different states, the accused citizen also finds it impossible to appear before different investigating agencies and Courts across the country.The practice has deleterious consequences for democracy, fair process and free speech in the country", it was advanced.

"Investigation into the FIR registered by the Haryana police (at PS Madhuban, Karnal) has commenced. The Petitioner was arrested on 21.05.2020. The mobile phone through which the tweet was made was recovered by the police. Subsequently, the Petitioner was sent to 14-days judicial custody on 22.05.2020", the plea averred.

"Investigation into the FIRs at Uttar Pradesh and Madhya is yet to commence. The Petition seeks quashing of these FIRs", it was prayed.

It was submitted that Punia is placed in a position similar to Republic TV Editor Arnab Goswami, as in a judgment delivered by the Supreme Court on May 19, in as much as:

i. Multiple FIRs have been filed against him in different states. All arise from a single tweet.

ii. The FIRs are vindictive and malafide, and have been filed by the Petitioner's political opponents with a view to stifle political speech.

The petition proceeded to narrate the facts that Millions of workers have been stranded across the country in view of the nationwide lockdown, and with a view to obviate the suffering of these workers, the General Secretary of the All India Congress Committee had offered to provide 1000 buses for their transport. This offer was initially accepted by the Uttar Pradesh Government. However, the State Government imposed a number of onerous conditions because of which the buses could not be made available to the workers.

i. A speech calling for dead Muslim women to be taken out of graves and raped. The said speech was made during a 2007 rally organised by the Hindu YuvaVahini, an organization founded by the present Chief Minister of Uttar Pradesh, Shri Ajay Mohan Bisht (Yogi Adityanath). ShriBisht was present on stage when the speech was made. The incident was reported by the national and international media.

ii. A February, 2020 incident at Gargi College, New Delhi where drunken men had reportedly molested and harassed the women students while chanting slogans of "Jai Shri Ram." This incident too was widely reported in the media.

Though these tweets were put up in the context of the incidents mentioned above, the Petitioner chose to delete them the very next morning. He put up a clarification stating that the tweet had been made with reference to the incident at Gargi College. The Petitioner also expressed regret over the post and apologized to anyone who had been offended.

Despite it having been deleted, several twitter users shared screenshots of the tweet, and tried to give it a communal flavour. The Petitioner also received numerous death threats on his phone and on social media. He was thus constrained to write to the Superintendent of Police, Karnal requesting for police protection in view of the dozens of threats received by him. He also requested that the multiple FIRs filed against him be consolidated and investigated in Karnal. The Petitioner also indicated his readiness to join in and cooperate with the investigation at Karnal.

The Petitioner was remanded to the custody of the Haryana Police for the purpose of seizure of his mobile phone on 21.05.2020. It is worthwhile to mention here that soon after the Petitioner's arrest; there were a number of posts on social media that suggested that the Petitioner would be handed over to the UP Police for "better treatment."

The Petitioner was remanded to 14-days judicial custody on 22.05.2020. His application for bail was rejected by the ACJM, Karnal on 23.05.2020. It is pointed out that during the hearing before the ACJM, the Uttar Pradesh police appeared with a warrant for production of the Petitioner before the CJM, Noida. The warrant was issued in relation to FIR lodged in Noida, Uttar Pradesh. However, no decision was taken on the warrant on the said date.

It was submitted that the Petitioner's tweet was intended to criticise the chief minister of Uttar Pradesh, and individuals following a rival political ideology. None of the provisions invoked in the various FIRs are made out in this case.In fact, even the State of Haryana, while opposing the Petitioner's Bail application contended that the Petitioner's tweet was "sufficient to cause enimity and hatred between workers of the congress party and Rastriya Sewayam Sewak Sangh." "The same clearly goes to show that offences under Section 153A, Section 295A and Section 505 (2) of the Indian Penal Code are not made out", he prayed.

The Contents of the FIR

As available on the official website of the Haryana Police, the FIR, registered on May 20, reads that "when the Nation is fighting the menace of COVID-l9 certain disgruntled elements with vested interests are causing provocation to cause not by deliberately and maliciously outraging the religious feelings of Hindus and their belief".

Indicating Punia's post on his official twitter handle, it is alleged that he "has malignantly posted provocative falsehood to promote enmity between sections of society on ground of religions and his acts are prejudicial to maintenance of harmony and are not only provocative but also deliberately and maliciously outrage the religious feelings of Hindus as [email protected] has want only and knowingly, by words written insulted the religion and the religious believes of Hindus".

The petition was filed through Advocates Sukhvinder Singh Nara and Pranjal Kishore.