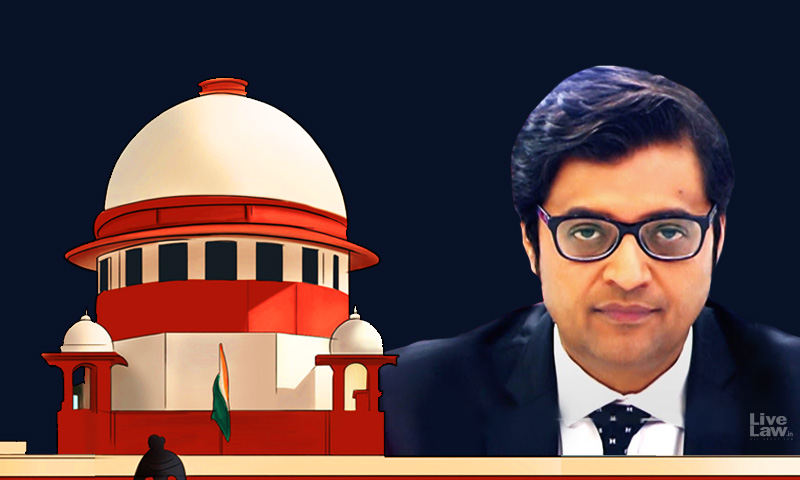 The Supreme Court on Tuesday rejected the plea made by Arnab Goswami, Editor-in-Chief of Republic TV, for transfer of probe of the case registered by Mumbai police for alleged communal remarks to the Central Bureau of Investigation.The Court also rejected his prayer for quashing of the FIR."There can be no quashing of FIR under Article 32. The Petitioner has the liberty to pursue remedy...

The Supreme Court on Tuesday rejected the plea made by Arnab Goswami, Editor-in-Chief of Republic TV, for transfer of probe of the case registered by Mumbai police for alleged communal remarks to the Central Bureau of Investigation.

The Court also rejected his prayer for quashing of the FIR.

"There can be no quashing of FIR under Article 32. The Petitioner has the liberty to pursue remedy before the competent court", the Court said.

A bench of  Justices Chandrachud & MR Shah had reserved orders on the aforementioned writ petition  on May 11.

The Court said that it was "unable to find any reason that warrants a transfer of the investigation to the CBI".

"The displeasure of an accused person about the manner in which the investigation proceeds or an unsubstantiated allegation (as in the present case) of a conflict of interest against the police conducting the investigation must not derail the legitimate course of law and warrant the invocation of the extraordinary power of this Court to transfer an investigation to the CBI", the bench observed.

The bench extensively referred to the precedents which held that transfer to CBI must not be ordered at the mere asking of the petitioner, and that it should be done only in "extraordinary circumstances" and "sparingly".

"Having balanced and considered the material on record as well as the averments of and submissions urged by the petitioner, we find that no case of the nature which falls within the ambit of the tests enunciated in the precedents of this Court has been established for the transfer of the investigation", the Court held.

The bench has however confirmed the earlier interim order passed on April 24, allowing the consolidation of several FIRs and their transfer to Mumbai. The interim protection granted on April 24 has been extended by three more weeks to enable him to avail appropriate remedy with respect to the FIR.  There is a further direction to the Mumbai Police Commissioner to provide him protection.

The Court has also clarified that there should not be any further FIRs against him on the same cause of action, and quashed the subsequent FIRs following the dictum in TT Antony's case.

The Court also made certain notable remarks regarding press freedom in the judgment.

India's Freedom Will Rest Safe As Long As Journalists Can Speak To Power Without Being Chilled By A Threat Of Reprisal: SC [Read Judgment]

"Article 32 of Constitution of India entrusts the court to protect Fundamental Rights. Journalistic freedom lies at core of Freedom of Expression. India's freedom of press stays as long as journalists can speak truth to power", continues J. Chandrachud. #ArnabGoswami

The FIR sought to be quashed by Goswami was lodged at the instance of Irfan Abubakar Shaikh, secretary of the Raza Educational Welfare Society alleging that his channel communalised the incident of a large gathering of migrants at Bandra.

The bench had also granted interim protection from coercive action on the FIR till delivery of the judgment.

During the course of hearing, the bench orally had observed that appropriate remedies were available for Goswami in the Bombay High Court, be it in the form of anticipatory bail or for quashing of FIR.

In furtherance of the above, Court had orally observed that special exemption from normal processes as envisaged under the Criminal Procedure Code cannot be made.

"We should not create an environment where anybody in particular is exempted from the normal course of proceedings" Court pointed out.

Senior Advocate Harish Salve had appeared for Goswami and vociferously argued in favour of journalistic expression, stating that the investigations were outright harassment for his client and an attempt at curbing freedom of free speech.

"There has to be a balance between Article 19(1)(a) and sanctity of the criminal investigation. Either hear our matter on merits or transfer the matter to CBI. There could be a chilling effect on the freedom of press", Salve urged, praying that the matter be taken over by the CBI from hands of the Mumbai police.

This was opposed by Kapil Sibal, Senior Advocate appearing for the State of Maharashtra, submitting that the transfer of case to CBI would mean "investigation will go into your hands".

This statement was seriously objected to by Tushar Mehta, Solicitor General of India.

In this context, Salve said, "Mr. Sibal's statement shows the need to transfer the case to CBI. This is a political problem between state and centre and I have been caught in a crossfire".

Solicitor General said that he has no sides to take in the case, and was not saying that the Court should accept or reject the prayers of the petitioner.

"This a peculiar case because the case is not against a person but against the society. The case is where the accused has no faith in police and the police has also come to court to "insulate" its investigation", SG said, alluding to the application filed by Maharashtra police in the top court alleging that Goswami was abusing the interim protection granted to him by the Court.

The SG also added "12 hours questioning towards a citizen in such type of case, is really disturbing, I think".

"Stop this communal violence and communal mongering. Decency and morality you [Arnab] need to follow. You are stigmatising people by way of sensationalising things" - Sibal had urged.

In rejoinder, Salve submitted that making critical comments on the issue of Markaz meeting of Tablighi Jaamaat cannot be construed as disruption of communal harmony.

"They are trying to stifle an unpleasant voice. The real purpose is to teach a journalist a lesson, by asking very silly questions during the investigation in the case", Salve had asserted.