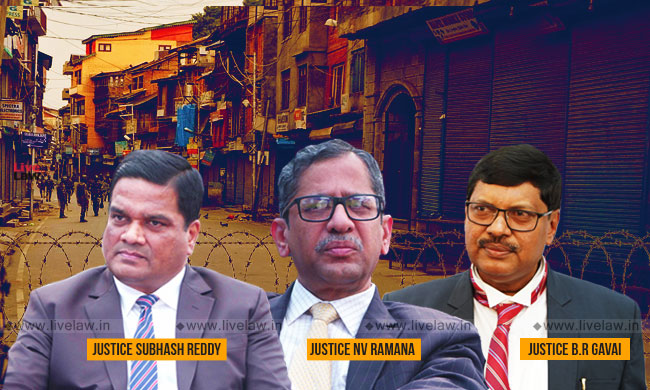 The Supreme Court on Wednesday reserved judgment in a batch of petitions which challenge the restrictions imposed in Jammu and Kashmir such as internet shut down, communication blockade, prohibitory orders etc., in the wake of the abrogation of the special status of the state on August 5.The bench comprising Justices N V Ramana, R Subhash Reddy and B R Gavai had been hearing the petitions...

The Supreme Court on Wednesday reserved judgment in a batch of petitions which challenge the restrictions imposed in Jammu and Kashmir such as internet shut down, communication blockade, prohibitory orders etc., in the wake of the abrogation of the special status of the state on August 5.

Incidentally, today is the 114th day of the lockdown imposed in Kashmir region.

The petitioners mainly argued that the restrictions on the liberties of citizens under Article 19 failed to satisfy the tests of reasonableness and proportionality as laid down by the Supreme Court in the Puttaswamy case on right to privacy.

Also, restrictions of such a wide scale for a period spanning over three months can be invoked only by declaring an emergency under Article 352 of the Constitution. Such restrictions cannot be imposed through orders of District Magistrates under Section 144 of the Code of Criminal Procedure. A declaration of emergency under Article 352 will be subjected to periodic review of the Parliament, and that way possibilities of abuse could be checked, argued the petitioners.

The restrictions have virtually paralyzed the lives of 7 million people; their daily lives have been impacted. Education, medical care, business, agriculture, tourism etc, have taken a bad hit due to the lockdown of the state, submitted the petitioners.

The Central Government and J&K Administration, represented by the Attorney General and Solicitor General respectively, justified that the restrictions were necessary in the interests of national security. Past instances of violence in the region, such as the public protests in the wake of killing of militant Burhan Wani in 2016,were cited. Internet ban is necessary to cut-off the co-ordination amongst militants. The restrictions have ensured that the "historic decision" of the Government to revoke the special status of the state was implemented without any bloodshed. The internet shut down was necessary to prevent the wide communication of terror and hatred through social media.

The Attorney General said that the "broader picture must be looked at instead of nitty-gritties of law".

The Solicitor General added that most of the restrictions have been lifted, except the internet ban, and normalcy has been restored.

A constitution bench of the Supreme Court, headed by Justice Ramana, is scheduled to hear the petitions challenging the abrogation of J&K special status and bifurcation and downgrading of the state into Union Territories on December 3.

Read comprehensive reports about all the hearings in Kashmir case here :

A detailed account of today's hearing may be read here.