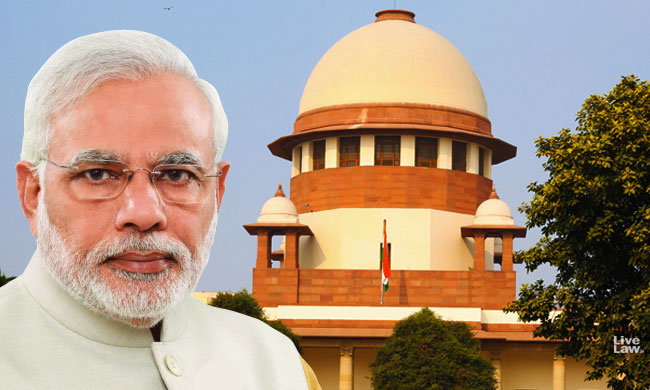 The Supreme Court on Wednesday reserved orders in a petition filed by ex-BSF jawan Tej Bahadur Yadav, challenging the election of Prime Minister Narendra Modi from Varanasi constituency in the 2019 Lok Sabha elections.A bench of Chief Justice SA Bobde, Justices AS Bopanna & V. Ramasubramaniun said that the issue concerned with the most important office of the country, i.e. the PMO and that...

The Supreme Court on Wednesday reserved orders in a petition filed by ex-BSF jawan Tej Bahadur Yadav, challenging the election of Prime Minister Narendra Modi from Varanasi constituency in the 2019 Lok Sabha elections.

A bench of Chief Justice SA Bobde, Justices AS Bopanna & V. Ramasubramaniun said that the issue concerned with the most important office of the country, i.e. the PMO and that it cannot be kept pending indefinitely. This happened after the counsel for petitioner sought adjournments and pass overs many times during the hearing.

"We have already adjourned it many times. This is an important case which revolves around the unique office of the Prime Minister. We cannot keep it pending indefinitely," said CJI SA Bobde

Advocate Pradeep Kumar told the court that the nomination of his client, an ex-BSF Jawan was wrongly rejected and that he was not given sufficient time after notice was issued to him.

At this juncture, CJI Bobde asked him where the said contention had been raised by the petitioner in the High Court.

Senior Advocate Harish Salve appeared for PM Modi and told Court that the contention was not raised before the High Court and neither was it raised now.

The special leave petition is filed challenging the judgment passed by the Allahabad High Court in December 2019 dismissing Tej Bahadur's election petition on the ground of lack of locus standi.

"…the petitioner is neither an elector nor a candidate at the election which he seeks to challenge and would therefore have no locus to file election petition," said a single bench of Justice Mohan Kumar Gupta of the High Court.

It may be recalled that Tej Bahadur Yadav had attempted to contest against PM Modi from Varanasi on BSP ticket. However, his nomination was rejected by the Returning Officer citing the reason that he had failed to submit a certificate stating that his dismissal from BSF was not on account of disloyalty or corruption.

He was dismissed from the BSF in 2017 after a video featuring him became viral, where he was seen he complaining about the quality of food served to soldiers guarding the India-Pakistan border became viral.

The HC held that Yadav could not have filed the election petition as he was neither nominated nor could he be deemed to be duly nominated.

The court relied on Section 33 of The Representation of the People Act, 1951 which states that if a person in government service is dismissed and a period of five years has not elapsed since the dismissal, such person shall not be deemed to be duly nominated as a candidate unless his nomination paper is accompanied by a certificate issued in the prescribed manner by the Election Commission to the effect that he has not been dismissed for corruption or disloyalty to the State.

The SLP filed in the Supreme Court contends that the High Court has failed to appreciate the misuse of provisions under Sections 9 & 33(3) of the Representation of the People Act, 1951 by the District Election Officer.

The plea drawn by Advocate Pradeep Kumar and filed by Advocate Sanjeev Malhotra further avers that a grave error has been committed by the High Court by failing to take into contention the merits of the case and thereby, wrongly deciding the plea on "mere technical grounds" of Order VII Rule 11 of the Code of Civil Procedure.

The ex-BSF jawan had previously approached the Supreme Court, challenging the decision of the Returning Officer to reject his nomination from Varanasi constituency. A Bench headed by then Chief Justice of India Ranjan Gogoi had dismissed the petition.