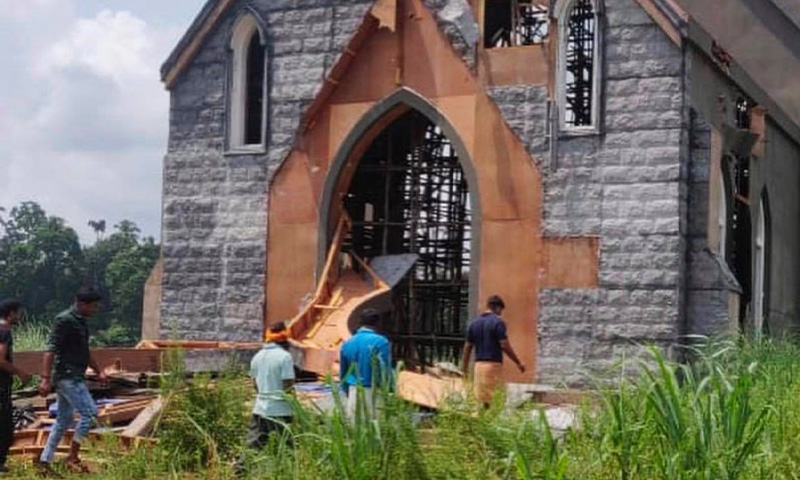 The Supreme Court on Tuesday set aside the Kerala High Court order cancelling the bail to a right wing organisation member, Kara Ratheesh, in an attempt-to-murder case.Ratheesh, a member of the All-India Hindu Parishad, while on bail, had been charged in May, 2020 for vandalising a church-like film set on the banks of the river Periyar at Kalady, that was made for the Malayalam film...

The Supreme Court on Tuesday set aside the Kerala High Court order cancelling the bail to a right wing organisation member, Kara Ratheesh, in an attempt-to-murder case.

Ratheesh, a member of the All-India Hindu Parishad, while on bail, had been charged in May, 2020 for vandalising a church-like film set on the banks of the river Periyar at Kalady, that was made for the Malayalam film Minnal Murali, besides participation in one other protest. Reportedly, the structure was demolished, since "complaints against erecting the structure in front of Lord Mahadeva on Kalady Manappuram (sandbank) did not yield results".

The vacation bench of Justices Navin Sinha and Ajay Rastogi noted that by the impugned order dated 18.03.2021, the High Court allowed the application under second proviso to Section 389(1) of the CrPC and cancelled the bail granted to the petitioner for his having not adhered to the conditions of grant of bail in the order dated 21.03.2018 (in the case of attempt-to-murder). He was shown getting involved in two further criminal cases after the High Court suspended the execution of his sentence in the attempt-to-murder with the condition that he would not get involved in any other offence, providing that breach of this condition would result in cancellation of bail.

The bench recorded that after the suspension of the sentence, 2 FIRs have come to be registered against the petitioner, in one of which the chargesheet has been filed.

"On a perusal of the 2 FIRs, we feel that the acts were like public protests, like stopping the shooting of a film inside a temple, etc", said the bench.

Noting that the petitioner had been on bail for nearly 3 years, the bench found itself unable to sustain the order of the High Court and set it aside.

It may be noted that on May 25, a coordinate bench of the Supreme Court had heard senior advocate R. Basant for the petitioner, who had taken the court through the contents of the FIRs pertaining to the said two cases and submitted that there had not been any such case where the petitioner could be said to have consciously and individually committed any crime as to forfeit the indulgence granted by the Court.

However, at the outset, the bench had posed a query to the senior counsel for the petitioner as to whether the petitioner had surrendered or not because the bail cancellation order was passed way back on 18.03.2021 and the High Court had directed him to be taken into custody and to be committed to prison with immediate effect. Even after taking note of the submissions of the senior counsel and examining the said FIRs, the bench had expressed reservations in dealing with the matter further unless the petitioner, first of all, surrenders to the process of law.

In the second call, Mr. Basant has submitted, on instructions, that the petitioner has presented himself before Angamaly Police Station on May 25 but he could not go to the Trial Court in view of the prevailing situation of pandemic and lockdown.

The senior counsel had strenuously submitted that there had not been any intentional default or contumacious conduct of the petitioner in not surrendering earlier because there was no specific direction for him to surrender.

"It is true that there had not been any specific direction in the impugned order to the petitioner to surrender but the fact of the matter remains that the High Court had consciously cancelled the bail granted to him after taking into account the allegations of the State that after suspension of execution of sentence with the condition that he would not get involved in any other offence, the petitioner was found involved in the said two cases...Having regard to the circumstances of the case, the petitioner, if has surrendered before the said Police Station, shall be taken into custody and committed to the prison. However, this process shall be without prejudice to the submissions sought to be made on behalf of the petitioner in this petition seeking leave to appeal", the bench headed by Justice Dinesh Maheshwari had directed then.