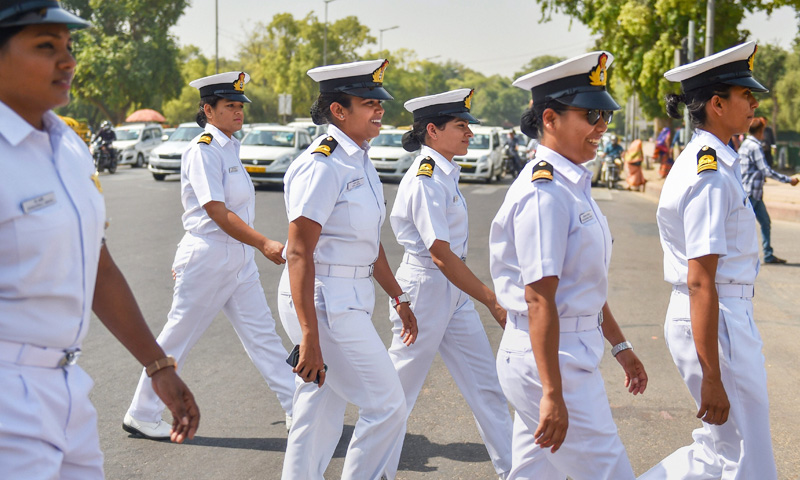 A Bench of the Supreme Court of India comprising of Justices DY Chandrachud and Ajay Rastogi heard submissions on Wednesday and Thursday regarding the availability of Permanent Commission to female officers of the Navy as well as the Air Force. The matter had been previously heard on February 13, 2020.On February 17, 2020, the same Bench had delivered a landmark judgement in the case of...

A Bench of the Supreme Court of India comprising of Justices DY Chandrachud and Ajay Rastogi heard submissions on Wednesday and Thursday regarding the availability of Permanent Commission to female officers of the Navy as well as the Air Force. The matter had been previously heard on February 13, 2020.

On February 17, 2020, the same Bench had delivered a landmark judgement in the case of The Secretary, Ministry of Defence v. Babita Puniya & Ors wherein it was held that Women Short Service Commission officers in the Indian Army are entitled to Permanent Commission at par with their male counterparts, regardless of their years of service.

On Wednesday, the Additional Solicitor-General Sanjay Jain appeared on behalf of the Union and made his submissions first. He began with explanations regarding the background of the functionality of the Navy. He elucidated the fact that the generalized Babita Puniya judgement could not be squarely applied to the Navy as there existed a premise of gender discrimination in the Indian Army; men were entitled to Permanent Commission and women were not. However, the question of gender discrimination and parity did not arise in case of Navy.

The ASG continued with the submissions stating that only one person had been provided entry into PC from SSC because of the unavailability of enough number of people and that this was only an administrative emergency.

Justice Chandrachud interjected to inform the ASG that in 1991, the women officers were informed about an incoming policy in 1997 that would grant them PC. Additionally, in 1999, a policy was brought in according to which PC was to be granted with reference to certain regulations. On the basis of the same, it could not now be contended that the policy was applicable only post 2008.

Senior Advocate Chander Uday Singh, representing the Petitioners, asserted that direct entry was available to men, but it was not available to women. To this, Justice Chandrachud stated that while the option of direct entry was not the subject matter of the petition. However, due to the absence of that option, the women officers were seeking the opportunity to be granted PC after SSC.

Singh also emphasized on the issue that there was no discernible reason for not providing PC to women. He invoked names of women commanders such as Annie Nagaraja, Ruby Singh, Anuradha Chauhan to portray to the Bench that these women had done a great service to the nation and had even received commendations and awards for the same.

On Thursday, the arguments were submitted by a counsel for the Petitioners who posited that the Regulations of the Navy were to be applicable to women once they were permitted to enter under the Act. Non-application of the same could entail violation of Article 14 of the Constitution of India.

Justice Chandrachud then brought up the issue of reinstatement of officers who had been out of service for 12 years. To this, the counsel reiterated the suggestions provided by Sr. Adv. Singh on the previous day wherein he had stated that appropriate training could be avoided for the women who had been out of service for so long. Justice Chandrachud raised his compunctions regarding the suitability of the suggestion. "What happens is that what we say here becomes a guiding principle for all other courts as well as the Armed Forces Tribunal. In 12 years, logistics and the system would have changed beyond recognition. We understand that ideally they should be reinstated, but adjustment would take a while."

The counsel brought up the concept of "facially neutral discrimination" wherein an employment practice does not seem discriminatory on the face of it, but it is discriminatory in its application or its effect.

Senior Advocate Aishwarya Bhati, representing the female JAG officers, then began with her submissions. She brought to the attention of the court that her client's case was similar to the one propounded by the Babita Puniya judgement. "My client's PC application was rejected because she was prior to the policy, but the applications of her male colleagues were accepted."

Bhati underlined the inherent discrimination present in the working of administrations by emphasizing the justifications provided to prevent women from attaining PC; seniority in the cases of national security, reduction of number for direct recruitment etc.

"It is interesting that gender-based classification is always justified by governments all over the world with such inane explanations. They will do anything to justify their discriminatory behavior."

Bhati also referred to various foreign judgements to posit the fact that the issue, though being dealt with quite late in India, had already been discussed and deliberated upon in other countries. She brought up the 1996 judgement of the Supreme Court of the United States in US v. Virginia wherein military training facilities violated the Equal Protection Clause. "It was observed that the test for gender discrimination is much higher because discrimination can be covert." Bhati also referred to a 1978 judgment rendered by the Supreme Court of Israel wherein women were not sent to training and the same was justified on the grounds of infrastructure, budgetary constrictions etc.

Sr. Adv. Bhati concluded her submissions by asserting to the Bench that this is merely not an issue about the welfare of women, but also for the cause of nation-building. "Women have played an important role in building of our nation, then why should they be excluded in any manner?"

Another advocate on behalf of Petitioners whose application for PC had been rejected, presented his submissions to the Court to elucidate his point. He stated that, "Their pleadings say that their cadres have not been managed due to court orders. They have not taken women in due to apparent saturation of recruitment. But, it can be seen that they have male officers who have already superannuated because there is cadre shortage. Their logic is that the Navy's youthful profile must be maintained and yet they have gone ahead and hired superannuated officers. This is prima facie discrimination."

Post the conclusion of the arguments for the Navy matter, the submissions for the Air Force matter commenced wherein the Counsel for the Appellants, that is the women of the Air Force, stated that despite the Air Force having accepted the Babita Puniya judgement, there was lack of implementation of the same. To this, the Counsel for the Respondents stated that the parties who had approached the Apex Court were not party to the judgment and were all out of service before the Order had been rendered.

"High Court order of 12th March, 2010 clearly states that the order will only be applicable to officers who were in the service, were party to the Writ Petition or had retired during the pendency of the proceedings. In this case, the parties were no longer in service well before the 2010 Order. This will not be applying to them. They had filed Writs before the HC, but those were dismissed on this premise."

The matter will now be continued next Wednesday, i.e. 4th March, 2020.