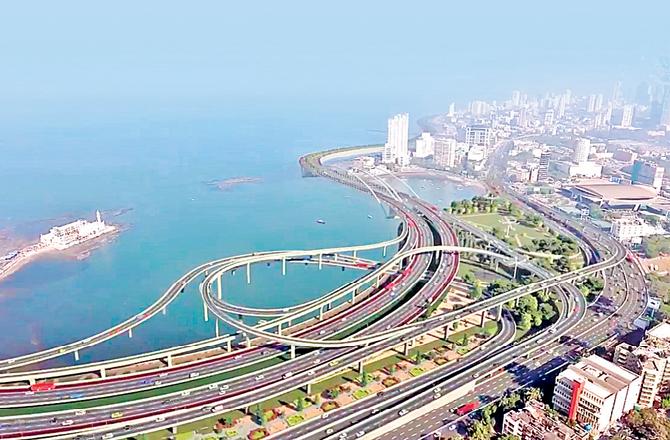 In a major relief to the Maharashtra government, the Supreme Court on Tuesday stayed the Bombay High Court judgment that quashed the Coastal Road Zone clearances granted to the city civic body's Rs 14,000 crore coastal road project. Though the SC has permitted the authorities to reclaim the land meant for construction of the eight-lane 29.2 km-long road project, it has...

Though the SC has permitted the authorities to reclaim the land meant for construction of the eight-lane 29.2 km-long road project, it has restrained them from developing it for the time being.

The ambitious project of the Municipal Corporation of Greater Mumbai proposes to connect the Marine Drive area in south Mumbai to suburban Borivali in north Mumbai.

A bench of Chief Justice S A Bobde and Justices B R Gavai and Surya Kant said,

"We are of the considered opinion that the order of the Bombay High Court dated July 16 should be stayed till further orders".

It said that the respondents including Municipal Corporation of Greater Mumbai can reclaim and secure the land meant for the road project but cannot develop it till further orders of the court.

At the outset, Solicitor General Tushar Mehta, appearing for the state, said that it is a 29.2 kilometer stretch along the coastal line connecting Marine drive to the sub-urban area of Mumbai.

He said that the High Court had stayed the order due to want of environmental clearances.

Mehta said there is no space in Mumbai and this project was started in 2018 to ease the traffic situation of the city and there is deadline of the year 2022 for its completion.

Senior advocate Mukul Rohatgi, appearing for the civic body, said that they had Coastal Zone Clearances but did not have environmental clearances as it was not a national highway.

"There is no need for any clearances. According to the notification of the Ministry of Environment and Forests (MoEF), the roads do not need any clearances but highways have to get such environmental clearances. Mumbai needs roads. This road is within Mumbai," he said.

Senior advocate Colin Gonsalves, appearing for the petitioners before the High Court, opposed the state government and said that it is a serious matter and the court should fix it for final hearing after the winter vacation.

"We have to protect the coastal areas of the country. Its degradation cannot be allowed. They have been reclaiming land and pouring concrete into the ocean. This court had earlier even refused to grant interim stay of the judgement of High Court," he said.

Gonsalves said that heavy machines were removed from the site after the High Court order but they will return and start work if the court grants interim stay.

The bench said it would stay the High Court verdict and hear the matter in the month of March.

The bench was hearing appeals filed by Municipal Corporation of Greater Mumbai, Larsen and Toubro Ltd and HCC HDC JV.

On October 23, the top court had refused to grant interim stay of the High Court verdict.

The apex court had earlier sought response from fishermen's association, activists and residents on whose petitions the High Court on July 16 quashed the CRZ clearances, saying there was "serious lacuna" in the decision-making process and lack of proper scientific study.

A division bench of Chief Justice Pradeep Nandrajog and Justice N M Jamdar of the High Court in its ruling had said the civic body cannot proceed with work on the 29.2 km project, which proposes to connect Marine Drive area in south Mumbai to suburban Borivali in north Mumbai.

The High Court had noted that the environmental clearance was required to be taken by the civic body under Environmental Impact Assessment (EIA) notification issued by the Centre.

"We declare that the civic body cannot proceed with the works without obtaining an environmental clearance under EIA notification. Further, permission under the Wildlife (Protection) Act, 1972 should also be obtained," the high court had said.

The high court, however, had upheld the December 30, 2015 amendment to CRZ Rules which permitted reclamation of land in coastal regulated areas for constructing roads.

In April, the high court had prohibited the civic body from carrying out any further work on the project following which the corporation appealed in the Supreme Court.

The petitioners challenged the reclamation and construction work for the project on the primary ground that it will result in damage to the coastline and destroy major marine life along the coast and livelihood of the fishermen.

They claimed that the coastal road project will irreversibly damage the coastal ecosystem and deprive the fishing community in the city of its source of livelihood.

The civic body had earlier told the high court that it had all the necessary approvals for the project.

The project, which proposed to connect south Mumbai with north western suburbs of the metropolis, was one of the flagship infrastructure schemes of the earlier BJP-led Maharashtra government.