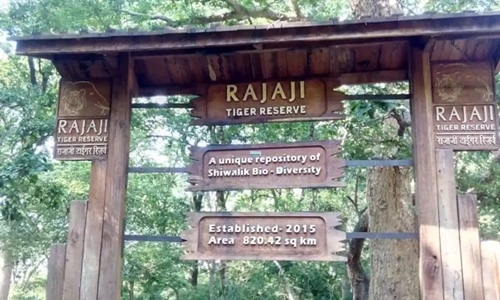 x
11.5km road was on critical corridor between Rajaji and Corbett Tiger Reserve

The Supreme Court on Friday stayed the construction of road in the ecologically sensitive area within Rajaji Tiger Reserve and traversing a critical corridor connecting the Corbett Tiger Reserve while also issuing notice to the Uttarakhand government and its agencies after the Central Empowered Committee (CEC) tabled its report before the apex court calling for an immediate halt on...

The Supreme Court on Friday stayed the construction of road in the ecologically sensitive area within Rajaji Tiger Reserve and traversing a critical corridor connecting the Corbett Tiger Reserve while also issuing notice to the Uttarakhand government and its agencies after the Central Empowered Committee (CEC) tabled its report before the apex court calling for an immediate halt on the construction work.

The court stayed the construction work on the 11.5 km long road being laid between Laldhang- Chillarkhal in the Rajaji Tiger Reserve in Uttarakhand by the State's Public Works Department (PWD).

The stay and the notice follows the CEC report dated June 19 wherein the Committee said the State had failed to take necessary approvals for constructing the road which traverses an animal corridor between Rajaji Tiger Reserve and Corbett Tiger Reserve.

The area where the road was being constructed supports four tigers per 100 square kilometers.

The illegal road construction work was brought to the attention of the CEC and the court by wildlife Conservation activist Rohit Choudhury.

"Perused the CEC Report (Interim) No.16/2019, filed by Central Empowered Committee. On perusal of the report it prima facie appears that the State of Uttarakhand is constructing Laldhang Chillarkhal Road which passes through corridor between Rajaji and Corbett Tiger Reserves. "It is apparent that advice of the National Tiger Conservation Authority (NTCA) has not been taken and permission from the standing committee of the National Board for Wildlife has also not been taken. There appear to be numerous violations of the Forest Conservation Act. Therefore, further construction of the road be stopped forthwith," ordered a bench of Justice Deepak Gupta and Justice Surya Kant.

On June 4, Choudhury had written to the member secretary, CEC urging him to look into the matter and stop the construction of roads, bridges and culverts in reserve forest area which also formed a part of the Shivalik Elephant Reserve rich in wildlife including many endangered species.

Choudhury said in his application that roads, bridges and culverts were being constructed illegally in the ecologically sensitive area on Laldhang- Chillarkhal road without the approval of NTCA under the Wildlife Act.

"Since the work is going on in full swing, I am requesting for the immediate hearing of this application otherwise the entire effort would be wasted and the project may become fait accompli and would cause irreparable loss to the forest and the wildlife in the area," he had said.

Choudhry also referred to a letter dated May 31 written by the Principal Chief Conservator of Forests to the Principal Secretary, Forest and Wildlife, Uttaranchal Government wherein he had justified the construction of the road on the ground that it would be useful in patrolling and for protection of animals during rains.

Choudhury says earlier this stretch was opened between sunrise and sunset for small passenger vehicles taking essential goods and vehicles of the locals in villages such as Laldhang, Chamriya, Siggaddi etc. Commercial vehicles were prohibited till year 2014 but then the rules were relaxed adversely affecting the wildlife.

Upon receiving Choudhry's application, the CEC sought a response from the National Tiger Conservation Authority(NTCA) of the Ministry of Environment, Forests and Climate Change, from the Uttarakhand government and others concerned regarding the construction work undertaken by the Public Works Department between Laldhang and Chillarkhalin.

The NTCA responded saying the State of Uttarakhand has overlooked the due process of law.

It said Section 38(o)(i)(b) of the Wildlife Protection Act is clearly invoked as the road falls within the Rajaji Tiger Reserve. Further, the road traverses a corridor identified in letter and spirit of section 38(o)(i)(g) between Rajaji and Corbett Tiger Reserves and as per data of the year 2014, All India Tiger Estimation, the area supports upto 4 tigers/ 100 sq km and variable prey density.

The CEC concluded that before starting the work on the road, the PWD did not take the necessary approval of the National Board for Wildlife and the Tiger Conservation Authority.

Of the photographs sent to it by Choudhury, the CEC said the same shows work on large scale going on at a "feverish pace".

The CEC recommended that the work be stopped forthwith as it would irreversible adversely impact the habitat and wildlife of the ecologically sensitive area.