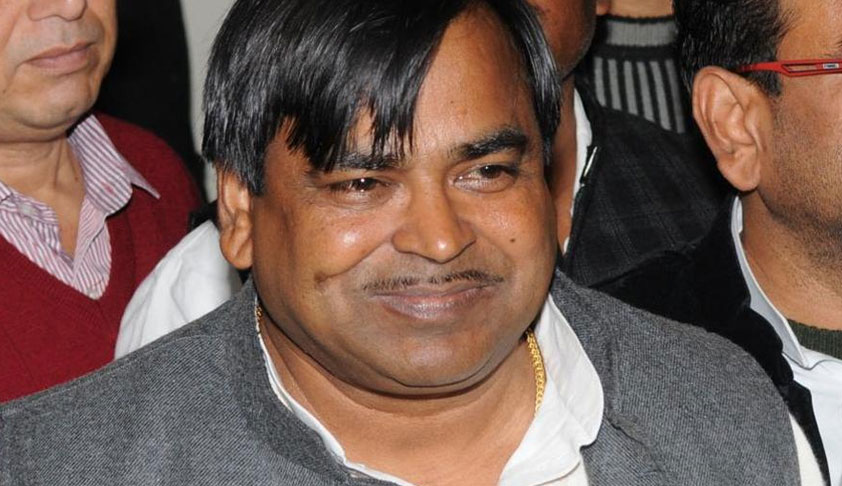 Supreme Court has stayed the short-term bail granted to Former Uttar Pradesh minister Gayatri Pradesh Prajapati by Allahabad High Court, in connection to a gang rape case registered against him.A bench of Justices Ashok Bhushan, R Subhash Reddy & MR Shah has issued notice in the plea by the State of Uttar Pradesh against the short-term bail order on medical grounds, granted by the HC...

Supreme Court has stayed the short-term bail granted to Former Uttar Pradesh minister Gayatri Pradesh Prajapati by Allahabad High Court, in connection to a gang rape case registered against him.

A bench of Justices Ashok Bhushan, R Subhash Reddy & MR Shah has issued notice in the plea by the State of Uttar Pradesh against the short-term bail order on medical grounds, granted by the HC on September 3, 2020.

Additional Solicitor General SV Raju led arguments on behalf of the State of Uttar Pradesh with the premise that the Hon'ble High Court had erroneously granted a short-term bail of two months to the politician accused in a POCSO case solely on medical grounds, ignoring that the Accused has throughout been treated in premier national medical Institutes KGMC / SGPGI.

It has also been averred by the State of UP that the regular bail application of the Respondent has already been fixed for hearing in the week commencing 28.09.2020.

State of UP has also contended, challenging the grant of bail that the politician is a prominent minister and wields considerable influence in the "environs of powers" and has hoodwinked authorities, even after the registration of FIR by victim.

"That the Respondent Accused was a very prominent Minister in the erstwhile government and wielded considerable influence in the environs of powers. The Political position of the accused was so dominating that a First Information Report against him, came to be registered, only after the victim approached this Hon'ble Supreme Court by filing a Writ Petition. Even after the registration of FIR, the Respondent accused hoodwinked the investigating agency for a considerable period of time but ultimately surrendered in April, 2017," the State of UP has averred.

The plea states that that during the course of the hearing of the bail application before the High Court, the report of reputed and premier Medical Institutions being KGMU, Lucknow and SGPGI Lucknow were called for and the said reports indicated that the though the Prajapati was suffering from certain ailments, the same were not life threatening. The SLP goes on to state that "infact, in January, 2020, the Respondent was discharged from KGMU in stable condition. The report from SGPGI also suggested that the condition of the Respondent was controlled in certain aspects" while another report by the Chief Medical Officer, Lucknow which comprised of Doctors from Ram Manohar Lohiya Institute of Medical Sciences, Lucknow clearly stated that the Respondent could continue treatment at the Jail Hospital.

"Despite the abovementioned reports being placed on record, the Hon'ble High Court failed to take note of the said expert reports and instead relied upon the report of the Senior Superintendent of District Jail, Lucknow who is not an expert in the medical field. The Hon'ble High Court while giving vague reasons of the Respondent requiring medical attention granted short term bail to the Respondent for a period of two months without ascertaining the hospital facility where the Respondent would be taking treatment," contends State of Uttar pradesh.

Moreover, the HC also failed to appreciate that the Respondent being a former Minister has considerable clout and there is a great likelihood of the witnesses being tampered and the trial being vitiated. Already, the Complainant/Victim and her daughters have turned hostile and chances of the trial being vitiated have increased with the bail being granted to the Respondent, the SLP has contended.

The bench of Justice Ved Prakash Vaish of Allahabad HC granted interim bail to Prajapati taking into account his medical condition, which was confirmed by the medical status report.

He was granted bail on a personal bond in the sum of Rupees Five Lakh with two sureties of Rupees Two Lakh Fifty Thousand each to the satisfaction of the concerned trial court.

Notably, it was alleged by a Chitrakoot-based woman that Prajapati and his six aides had gang-raped her and attempted to outrage the modesty of her minor daughter when he was a minister in Uttar Pradesh.

In 2017, after the Uttar Pradesh police denied to register an FIR against Prajapati, a PIL petition was filed by the woman in the Supreme Court and had sought the court's direction for lodging an FIR.

Consequently, the Supreme Court had ordered the UP police to lodge a First Information Report (FIR) against him in connection with cases of alleged gang rape and sexual harassment.

Notably, in 2019, the CBI had registered two FIRs in connection with the mining scam in Uttar Pradesh and had named Prajapati and four IAS officers. The FIRs were registered as the central probe agency conducted search operations at 12 locations in the state.