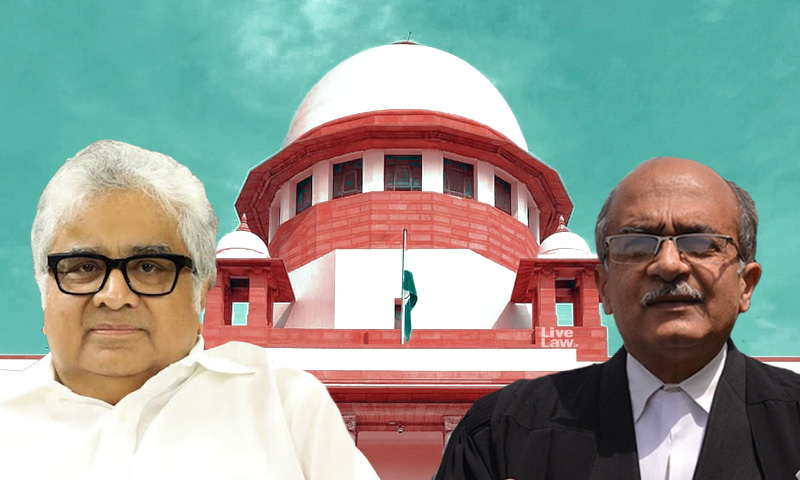 A 11-year old criminal contempt case against Advocate Prashant Bhushan is listed tomorrow in the Supreme Court for hearing.A bench comprising Justices Arun Mishra, B R Gavai and Krishnan Murari will be considering the suo-moto contempt case, which was registered on the basis of a complaint made by Senior Advocate Harish Salve.The subject matter of the case is an interview given by Bhushan...

A 11-year old criminal contempt case against Advocate Prashant Bhushan is listed tomorrow in the Supreme Court for hearing.

A bench comprising Justices Arun Mishra, B R Gavai and Krishnan Murari will be considering the suo-moto contempt case, which was registered on the basis of a complaint made by Senior Advocate Harish Salve.

Salve also alleged in his complaint that Bhushan made a serious imputation against the then Chief Justice S H Kapadia, by stating that he had heard a matter involving Sterlite company despite holding shares in it.

The complaint was filed by Salve through an interlocutory application filed in the Sterlite case, in which he was the Amicus Curiae.

This statement was allegedly made by Bhushan by omitting to mention that the advocates involved in the case were made aware of the fact that Justice Kapadia held shares in the company, and that the matter was heard by the judge based on the consent of the counsels involved.

Senior Advocate late Ram Jethmalani, who appeared for Bhushan, raised a preliminary objection as to the maintainability of the contempt petition.

Jethmalani submitted that the Court could not have taken cognizance of the complaint filed Salve as it was not accompanied with the sanction of the Attorney General as mandated by Section 15(1)(a) and (b) of the Contempt of Courts Act, 1971, read with Explanation (a) and Rule 3(a), (b) and (c) of the Contempt of Supreme Court Rules.

Since the contempt jurisdiction was a fetter on the fundamental right to freedom of speech of a citizen, no deviation from the prescribed procedure was permissible, he urged.

His arguments were supported by Senior Advocate Shanti Bhushan, who appeared for Tarun Tejpal.

On July 14, 2010, a bench headed by Justice Altamas Kabir rejected the objections by affirming that the SC was not acting on the complaint filed by Salve, and was proceeding suo-moto.

"Merely because the information regarding the allegedly contemptuous statements made by Respondent No.1 and published by Respondent No.2 was furnished to the Court by the learned Amicus Curiae(Sr Adv Harish Salve), the proceeding cannot lose its nature or character as a suo motu proceeding. The learned Amicus Curiae was entitled to place the information in his possession before the court and request the court to take action. The petition filed by him constituted nothing more than a mode of laying the relevant information before the court for such action as the court may deem fit. No proceedings can commence until and unless the court considers the information before it and decides to initiate proceedings. If the court considers the information placed before it and initiates proceedings by directing notice to issue to the alleged contemnors the action taken comes within the ambit of Rule 3(a) of the Rules to Regulate Proceedings for Contempt of the Supreme Court, 1975", the bench stated in the order.

The bench acknowledged that it was a mistake on the part of the Registry to have placed the complaint before the judicial side of the Court, instead of the administrative side.

But, it is an "administrative lapse which does not reduce the gravity of the allegations", said the bench in the order holding the contempt case maintainable.

The bench also observed prima facie that Bhushan lowered the dignity of the Court in the eyes of the public with his comments.

"...this is one of those rare cases where, even if the cognizance is deemed to have been taken in terms of Rule 3 (c) of the Rules to Regulate Proceedings for Contempt of the Supreme Court, 1975, without the consent of the Attorney General or the Solicitor General, the proceedings must be held to be maintainable", the Court said.

The matter was listed last on December 11, 2018, before a bench comprising the then CJI Ranjan Gogoi, Justices SK Kaul and KM Joseph.

Incidentally, the bench which is hearing the matter tomorrow had issued a contempt notice to Bhushan on July 22 in a suo moto case registered over two of his tweets on judiciary and CJI.

Tarun Tejpal, the second respondent in the case, is now facing trial in a rape case relating to an incident which took place in Goa in 2013.