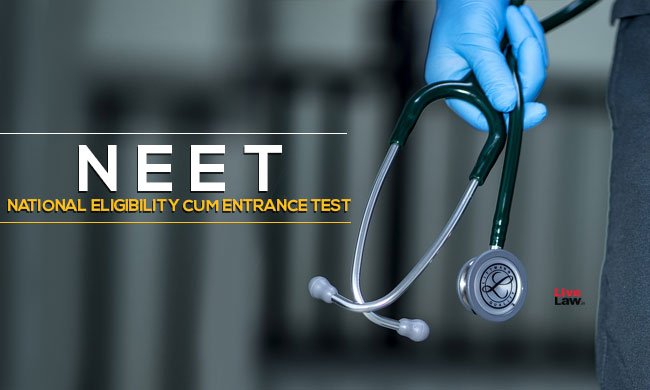 In a significant verdict, the Supreme Court on Wednesday upheld the National Eligibilty-cum-Entrance Test (NEET) for graduate and post-graduate programs in medical and dental courses in the country.In a batch of writ petitions titled 'Christian Medical College, Vellore vs Union of India', the bench held that prescribing a uniform examination of NEET for admissions in medical & dental...

In a significant verdict, the Supreme Court on Wednesday upheld the National Eligibilty-cum-Entrance Test (NEET) for graduate and post-graduate programs in medical and dental courses in the country.

In a batch of writ petitions titled 'Christian Medical College, Vellore vs Union of India', the bench held that prescribing a uniform examination of NEET for admissions in medical & dental courses did not violate rights of unaided/aided minority institutions under Articles 19(1) (g) & 30 read with 25, 26 & 29(1) of Constitution.

Later, these notifications were incorporated as statutory provisions in 2016 as Sections 10D of the Medical Council of India Act and the Dentists Act.  These provisions were also subjected to challenge in subsequently filed writ petitions.

Upholding the constitutional validity of these statutory provisions, and also the earlier regulations, a bench comprising Justices Arun Mishra, Vineet Saran and M R Shah held that NEET was introduced to weed out corruption in admission processes, and also to set a uniform standard across the nation.

Rejecting the argument that NEET infringed the right to freedom of trade and business of educational institutions under Article 19(1)(g), the bench said :

"The rights under Article 19(1)(g) are not absolute and are subject to reasonable restriction in the interest of the student's community to promote merit, recognition of excellence, and to curb the malpractices. Uniform Entrance Test qualifies the test of proportionality and is reasonable. The same is intended to check several maladies which crept into medical education, to prevent capitation fee by admitting students which are lower in merit and to prevent exploitation, profiteering, and commercialisation of education".

The Court said that the uniform Entrance Examination cannot be said to be unreasonable regulatory framework.

The bench held that individual examinations by some institutions will affect national standards.

"To weed out evils from the system, which were eating away fairness in admission process, defeating merit and aspiration of the common incumbent with no means, the State has the right to frame regulatory regime for aided/ unaided minority/ private institutions as mandated by Directives Principles, Articles 14 and 21 of the Constitution", the Court said.

No violation of minority rights

The bench also held that NEET did not infringe upon the rights of minority institutions under Articles 29(1) and 30 of the Constitution.

Professional educational institutions constitute a class by themselves. Specific measures to make the administration of such institutions transparent can be imposed. The rights available under  Article 30 are not violated by provisions carved out in Section 10D of the MCI Act and the Dentists Act and Regulations framed by MCI/DCI. The regulatory measures are intended for the proper functioning of institutions and to ensure that the standard of education is maintained and does not fall low under the guise of an exclusive right of management to the extent of maladministration.

The regulatory measures by prescribing NEET is to bring the education within the realm of charity which character it has lost. It intends to weed out evils from the system and various malpractices which decayed the system. The regulatory measures in no way interfere with the rights to administer the institution by the religious or linguistic minorities."

The bench concluded as hereunder :

"Resultantly, we hold that there is no violation of the rights of the unaided/aided minority to administer institutions under Articles 19(1) (g) and 30 read with Articles 25, 26 and 29(1) of the Constitution of India by prescribing the uniform examination of NEET for admissions in the graduate and postgraduate professional courses of medical as well as dental science. The provisions of the Act and regulation cannot be said to be ultra vires or taking away the rights guaranteed under the Constitution of India under Article 30(1) read with Articles 19(1)(g), 14, 25, 26 and 29(1)"

NEET struck down in 2013; later, the judgment recalled in review

The majority held that MCI and DCI did not have the power to introduce NEET through notifications. It was also held that that NEET violated the rights of minority educational institutions.

Later, in 2016, a 5-judge bench headed by Justice Anil R Dave recalled the 2013 judgment in review, and opened the cases for fresh-hearing.

The Court also permitted the conducting of NEET for admissions in the meantime.