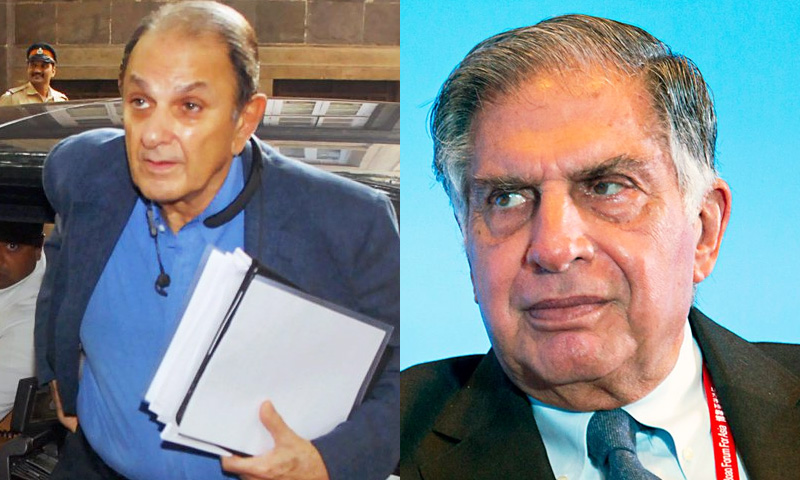 The Supreme Court on Monday adjourned the criminal defamation case filed by Nusli Wadia against Ratan Tata by urging both the billionaire businessmen to resolve their differences.The bench comprising CJI S A Bobde, Justices B R Gavai and Surya Kant was hearing a special leave petition filed by Wadia challenging the Bombay High Court's judgment which quashed the criminal defamation case filed...

The Supreme Court on Monday adjourned the criminal defamation case filed by Nusli Wadia against Ratan Tata by urging both the billionaire businessmen to resolve their differences.

The bench comprising CJI S A Bobde, Justices B R Gavai and Surya Kant was hearing a special leave petition filed by Wadia challenging the Bombay High Court's judgment which quashed the criminal defamation case filed by him against Ratan Tata and ten others.

The criminal defamation case was filed by Nusli Wadia seeking Rs 3000 crore damages in wake of his removal as an independent director of Tata Sons.

As the hearing commenced, the CJI asked Senior advocate Aryama Sundaram, appearing for Wadia, how removal from a post amounted to defamation. In response, Sundaram clarified that the proceedings had not been initiated against the company, but against individuals who had written to the company seeking a special resolution.

"We also seek relief against those who had issued a special resolution and then released it to the media", submitted Sundaram. Defamation has been alleged against members of the company who requisitioned the general meeting, and wrote letters against Wadia in the aftermath of the incident which involved Cyrus Mistry and his removal as Executive Director.

Senior advocate Abhishek Manu Singhvi, appearing for the respondents, informed that the notice was merely a statutory step that had been taken, with no intention to defame anyone.

Agreeing with Singhvi about the statutory notice, the CJI urged both parties to settle the matter amicably. "Both of you are leaders of the industry...why don't you sit and resolve it without pursuing litigation?", remarked CJI Bobde. While the bench indicated that it was inclined to ask the parties to settle the matter and dismiss the appeal, the matter has been adjourned. Upon the request of the appellant, the court will now take up the matter next Monday, January 13.

The case has some nexus with the Tata Sons- Cyrus Mistry dispute. Wadia, who had backed Mistry, was removed following Mistry's removal.

The Bombay HC held that the publication of resolution regarding Wadia's removal did not amount to criminal defamation.

In the judgment passed on July 23, 2019, the HC bench of Justice Ranjit More and Justice Bharati Dangre held :

"We are satisfied that there is no prima facie case of defamation in the present case as there was no intent on the part of the petitioners to cause harm to the reputation of the respondent as contemplated by Section 499 of the IPC nor can we discern any actual harm caused to his reputation, since the element of mens rea being absent and since the publication was only limited to the Board of Directors of the holding Company and the respective shareholders of these Companies, it could not be said that it was circulated widely over a section of general public.

Publication of the news about a resolution being passed by a well acclaimed business house happened to be a business news for the media and both the petitioner no.1 and respondent no.2 being well­known business personalities, they drew the attention of the media and the allegations/imputations and the story of removal of the respondent no.2, no wonder, happened to be a hot topic for media. However, it is not conclusively established as to it is the petitioners who have leaked the information to the media and particularly when we have noted that the respondent no.2 himself had addressed the communication to the shareholders independent of his representation in terms of sub­section (4) of Section 169 and which he requested for being circulated to the shareholders.

The allegations of the respondent no.2 in respect of disparaging remarks/comments being widely circulated is also not correct since it was only circulated to the shareholders and they had a right to know the background of the resolution on which they were supposed to vote."