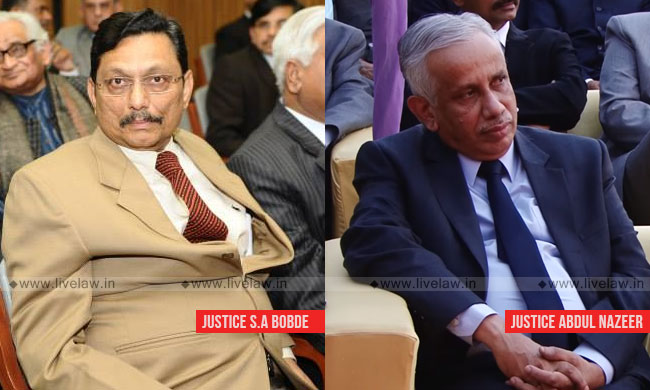 The Supreme Court has vacated the stay on declaration of results of the Staff Selection Commission Examination 2017—both Combined Graduate Level Examination and Combined Higher Secondary Level Examination while also constituting a six-member expert committee headed by Justice GS Singhvi, former apex court judge, to decide if the entire examination process was tainted by leakage and...

The Supreme Court has vacated the stay on declaration of results of the Staff Selection Commission Examination 2017—both Combined Graduate Level Examination and Combined Higher Secondary Level Examination while also constituting a six-member expert committee headed by Justice GS Singhvi, former apex court judge, to decide if the entire examination process was tainted by leakage and precautions to be taken in future examinations.

A bench of Justice SA Bobde and Justice S Abdul Nazeer vacated the interim stay imposed by it on August 31 on a PIL filed through advocates Prashant Bhushan and Govind Jee alleging large-scale corruption, leakage of question papers, use of remote access software for solving papers, screen-sharing of candidates' computer terminal to unknown persons etc.

The constitution of the Justice Singhvi Committee and its terms of reference are in line with one of the prayers of the PIL for court-monitored probe, besides constitution of an expert committee to suggest systematic reforms in the SSC examination system.

The committee will be looking into the following aspects:

a) Whether as per the investigation done by the CBI and hence its interim reports/status reports, it is possible to conclude that the entire examination process, per se, is/could have been tainted by leakage? If yes, can those beneficiaries be identified?

c) Considering the totality of the facts and examining the entire process, will the Committee suggest scrapping of the entire examination or taking action in case of individuals [if identifiable as per Reference No. (a) above]?

d) What mandatory technical precautions may be required to be taken for the future examinations with a view to minimize the possibility of any malpractice, use of unfair means or any other illegal method to gain undue/unfair advantage in the examination?

e) If the answer to Reference No. (a) above is affirmative-namely examination requires to be re-conducted, will the Committee approve conduct of re-examination and all future examinations by the SSC through the newly engaged service provider, or will it prefer a reliable and specially designed government agency, like the National Testing Agency (NTA) for all such examination?

The Committee would be entitled to choose an agency other than the NTA, as may be advised.

f) Any other recommendation/suggestion which the Committee may consider appropriate for conducting such examination in future after having gone through the entire exercise.

The SSC under the Department of Personnel and Training (DoPT) conducts exams for recruitment to various group B Non-Gazetted Posts (Examiner & Preventive Officer in Customs, Inspectors in Central Excise & Taxations, Sub-Inspector in CBI, Assistant Enforcement Officer in Enforcement Directorate & Statistic Investigator, etc.), and Group 'C' Non-Technical post (Auditor in CAG, Accountant in CAG and Controller General of Accounts, Tax Assistant, etc.) in Government of India. The SSC also recruits to Group 'B' Gazetted posts of Assistant Accounts Officer and Assistant Audit Officer for the Indian Audit and Accounts Department.

The exams are conducted in tiers.

In August 2017, SSC conducted an online exam for Combined Graduate Level Tier-I examination. The candidates who made it in the cut off list of Tier-I exam appeared for online combined graduate level Tier-II Exam in February 2018.

In May, the court had directed the petitioner to make a representation before the DoPT but despite the allegations, the department went on to conduct exams for other tiers too.

The petitioner also relied on the release issued by Special Task Force, Uttar Pradesh, in March showing involvement of a gang in solving SSC examinations.

It also relied on a CBI FIR and the report it had filed in July 2018 stating that an enquiry had revealed that besides other persons, one Sant Prasad Gupta, the content head of SIFY, the vendor of SSC exam, was also involved in the leakage.