SC Will Conclude The Hearing Of Ayodhya Case Today 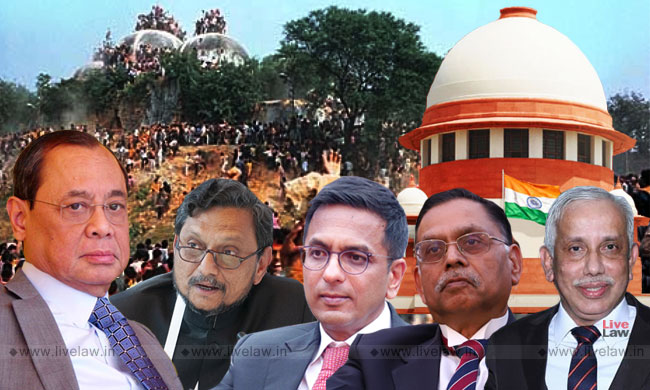 The Supreme Court on Wednesday made it clear that it will conclude today the day-to-day hearing in the politically sensitive Ram Janmbhoomi-Babri Masjid land dispute case at Ayodhya, saying "enough is enough".

A 5-judge Constitution bench headed by Chief Justice Ranjan Gogoi said that it is hearing the Ayodhya land dispute case for the last 39 days and no more time beyond today will be granted to parties to conclude the hearing in the case.

"This matter is going to be finished today by 5 PM. Enough is enough," the bench, which also comprises justices S A Bobde, D Y Chandrachud, Ashok Bhushan and S A Nazeer, said at the start of the proceedings on the 40th day.

The apex court had earlier said the hearing would be concluded on October 17. Now the deadline has been advanced by one more day. The CJI is demitting office on November 17.

The bench also rejected a plea of a party seeking to intervene in the ongoing hearing and said no such interventions will be allowed now at this stage of proceedings.

Senior advocate C S Vaidyanathan, appearing for a Hindu party, has commenced his submission in response to a lawsuit filed by Sunni Waqf board in 1961 seeking title claim over the 2.77 acre disputed land at Ayodhya.

Fourteen appeals have been filed in the apex court against the 2010 Allahabad High Court judgment, delivered in four civil suits, that the 2.77-acre land in Ayodhya be partitioned equally among three parties -- the Sunni Waqf Board, the Nirmohi Akhara and Ram Lalla.