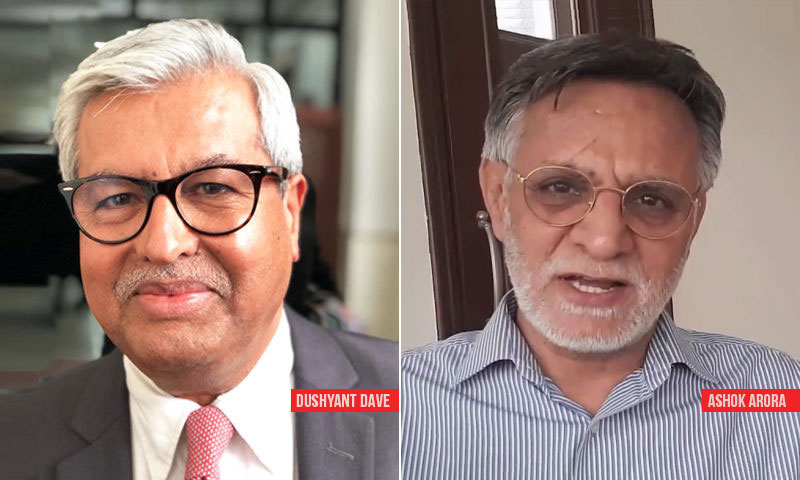 The Supreme Court Bar Association has issued a notice to Ashok Arora to show cause as to why ex-parte proceedings by a three-member committee should not be initiated against him for alleged imputations laid out in the notice. These range from allegations of creating a hostile atmosphere so as to make regular and cordial functioning of the Executive Committee impossible, using...

The Supreme Court Bar Association has issued a notice to Ashok Arora to show cause as to why ex-parte proceedings by a three-member committee should not be initiated against him for alleged imputations laid out in the notice.

These range from allegations of creating a hostile atmosphere so as to make regular and cordial functioning of the Executive Committee impossible, using abusive language against office-bearers of the SCBA, usage of threatening language against the Treasurer (SCBA) Meenesh Dubey, convening an illegal EC committee, alleged embarrassment cause at an SCBA event as well as failure to maintain minutes of meeting(s).

The notice alleged that Arora had adopted a deliberate hostile and obstructionist approach with the members as well as the members of EC since the very first meeting held on December 18, 2019. Several instances have been highlighted in the notice such as shouting at the President of the SCBA during convened meetings and stating that the Secretary was in fact the Cheif Executive Officer (CEO), even after being repeatedly told that the scope of the Secretary viz. the Constitution of the SCBA and its rules laid down preparing agenda in consultation with President and prepare minutes of meetings.

Further, the notice states that Arora has made abusive and objectionable insinuations against officer bearers of the SCBA, thereby creating dissension and hatred in the cohesive working of the executive committee.

The notice highlights messages that have been allegedly exchanged by Arora wherein he has referred to the President as "Ravana", "shameless creature" and used insulting and derogatory phrases against the President, Senior Advocate Dushyant Dave.

Pointing to a whatsapp message that was directed against Meenesh Dubey, Treasurer of the SCBA, the notice purports that Arora acted "without any authority under the rules" and tried to create a rift in the working of the EC.

The notice further highlights the alleged lackadaisical approach of Ashok Arora while recording minutes of the meeting. In this context, it states,

"It was incumbent upon you to record and ensure maintenance of proper documentation of the minutes of EC.. the records reveal that not only that the documentation of the minutes and record of meetings were not properly maintained but case for approvals were initiated on whatsapp messages, which led to objections from members of Executive Committee"

While earmarking the "embarrassment" caused to the SCBA at an event which Justice  Deepak Gupta and many other dignitaries attended at ISIL auditorium, the notice states that "To the embarrassment of many who had gathered for the lecture, you spoke at the lecture rudely, loudly with unseemly outburst and your conduct was found both embarrassing and did not behave well of the position Hon. Secy. that you were holding"

Additionally, the notice lays down that on May 7, 2020, "in continuation of this litany" of Arora's "disruptive" and "unlawful actions", an alleged unauthorised meeting was held convening the General Body of the SCBA, in dereliction of his role as the Secretary as well as in contravention of the stipulated SCBA Rules.

Apropos this, the notice calls for a reply on behalf of Arora within a week of the instant Show Cause Notice.