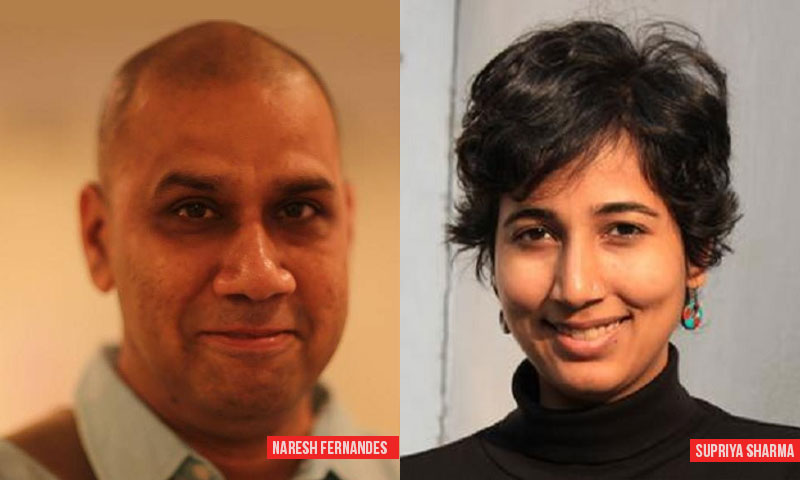 A petition has been filed before Allahabad High Court by Executive Editor of Scroll.in, Supriya Sharma, and Editor of Scroll.in, Naresh Fernandes, for quashing the FIR lodged with the UP Police in connection to an article published by Sharma on the debilitating affairs in the Prime Minister's constituency, Varanasi, during the lockdown.   Lodged by Mala Devi, a resident of Varanasi's...

A petition has been filed before Allahabad High Court by Executive Editor of Scroll.in, Supriya Sharma, and Editor of Scroll.in, Naresh Fernandes, for quashing the FIR lodged with the UP Police in connection to an article published by Sharma on the debilitating affairs in the Prime Minister's constituency, Varanasi, during the lockdown.

Lodged by Mala Devi, a resident of Varanasi's Domari village, the FIR states that Sharma misrepresented her statements and made false claims in the article titled, "In Varanasi village adopted by Prime Minister Modi, people went hungry during the lockdown".

The impugned FIR has been registered under Sections 269 and 501 of the Indian Penal Code as well as Sections 3(1)(r) and 3(1)(s) of The Scheduled Castes and Scheduled Tribes (Prevention of Atrocities) Act, 1989.

The plea, filed by Advocates Vrinda Grover, Swetashwa Agarwal and Raghav Dwivedi on behalf of Sharma and Fernandes, states that the Petitioners are challenging the legality, validity and correctness of the impugned FIR and are further seeking protection of the Petitioners' liberty by securing a direction from the Court for no coercive action to be taken against the Petitioners in relation to a "wholly false, motivated, malicious, baseless and untenable FIR".

"The said FIR is not only wrong on facts, but also unsustainable in law, as no offence is made out prima facie under the Indian Penal Code or under The Scheduled Cases and Scheduled Tribes (Prevention of Atrocities) Act, 1989. The registration of the said FIR amounts to an abuse of the process of law, intended to intimidate, silence and punish independent journalism; and any coercive action against the Petitioners would amount to a grave miscarriage of justice".

In the 8th June article in question, Sharma had quoted Mala, an alleged domestic worker in Varanasi, of having faced extreme hardship, including lack of food or ration during the lockdown, and had received no assistance from the village Pradhan, while also risking police beatings during the lockdown for walking all the way to Varanasi in search of work.

The @scroll_in 's Editor @tajmahalfoxtrot and Executive Editor @sharmasupriya approach Allahabad HC for quashing an FIR filed against them in connection to a report published in Scroll debilitating state of affairs in the @PMOIndia 's constituency, during the lockdown

The plea asserts that, in keeping with good journalist practice, Sharma has recorded her interview with Ms. Mala and a transcript of the same has been annexed with the petition.

However, on 13th June, the impugned FIR had been registered against Sharma and Fernandes for falsely reporting the Respondent's family's condition. She claimed that she is a sanitation worker at the Varanasi city municipality through outsourcing and she did not face any distress during the lockdown, and had access to the food.

"The complainant further alleges that the said article makes a mockery of the complainant's poverty and her caste, which has caused the complainant mental trauma and brought her disrepute in society."This allegation has been contested by Sharma in the instant petition.   "All reporting about Ms. Mala in the concerned news article has been done bonafide and is based on the primary account given by Ms. Mala herself. The Petitioner's action in reporting about the statements of Ms. Mala are in no way derogatory, insulting, abusive, false or by any stretch of imagination, an act of atrocity.

The Petitioner No. 1 has reported fairly and truthfully, and thus cannot be subjected to any liability for the same.

"The plea invokes right to personal liberty guaranteed under Article 21 of the Constitution of India as well as the legitimate exercise of freedom of press protected under Article 19(1)(a); the latter cannot be used a means to abridge or stifle the former. It has further been submitted that no prima facie offence has been made out under Sections 269 and 501 of the IPC, or Sections 3(1)(r) and 3(1)(s) of the SC & ST Act, and therefore, the FIR deserves to be quashed.

"That there is no prima facie material against the Petitioners with regard to any cognizable offence having been committed by them. In fact, there are overwhelming facts, materials and evidence to the contrary which demonstrate and establish that the contents of the FIR are wholly false and fabricated and that the offences under which the said FIR is registered are untenable, as they lack jurisdiction and the authority of law". In light of the above, the petition prays for directions to quash the impugned FIR as well to ensure that no coercive steps are taken in pursuance of the impugned FIR", states the Petition.

The Petition was drafted by Adv. Vrinda Grover and Adv. Soutik Banerjee and filed through Adv. Swetashwa Aggarwal and Adv. Raghav Dwivedi.