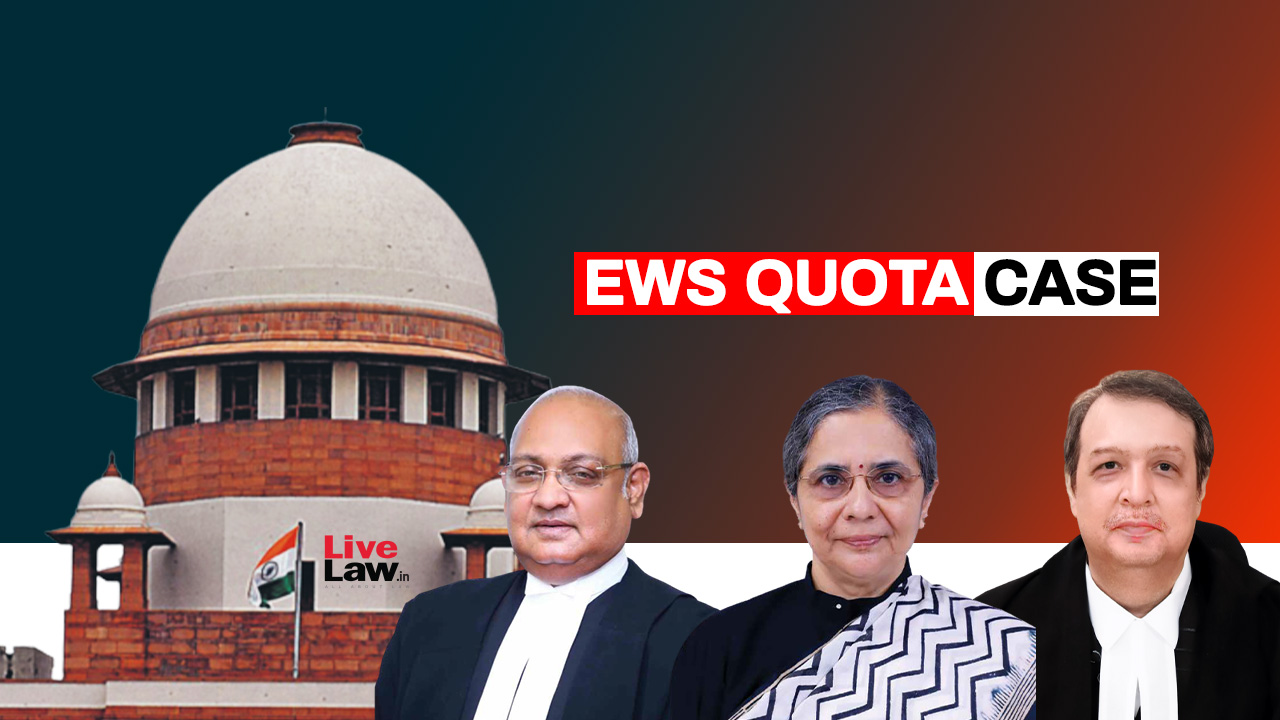 The Supreme Court by 3:2 majority upheld the validity of the 103rd Constitutional Amendment which introduced 10% reservation for Economically Weaker Sections (EWS) in education and public employment. Justices Dinesh Maheshwari, Bela Trivedi and JB Pardiwala upheld the 103rd Constitution Amendment, Justice S Ravindra Bhat wrote a dissenting judgment, which was concurred with by the Chief Justice of India Uday Umesh Lalit.

The majority judgement largely held that there was a definite logic in such exclusion as the backward classes mentioned in Articles 15(4), 15(5) and 16(4) were already provided with affirmative action in terms of reservation. Therefore, there was "no need to extend them or any of their constituents yet another benefit in the affirmative action of reservation carved out for other economically weaker sections." In saying so, the majority opinion found merit in the arguments advanced by the respondents that the exclusion of SCs, STs and OBCs from the EWS quota fit the constitutional scheme so as to avoid "double benefit" to them; and thus, such exclusion was a part of reasonable classification.

Justice Maheshwari, in his judgement noted–

"As noticed infra, there is a definite logic in this exclusion; rather, this exclusion is inevitable for the true operation and effect of the scheme of EWS reservation. Obviously, for the reason that those classes are already provided with affirmative action in terms of reservation, in the wisdom of the Parliament, there was no need to extend them or any of their constituents yet another benefit in the affirmative action of reservation carved out for other economically weaker sections. Moreover, the benefit of reservation avails to the excluded classes/castes under the existing clauses of Articles 15 and 16; and by the amendment in question, the quota earmarked for them is not depleted in any manner."

Justice Maheshwari further noted that the amendment made a reasonable classification between "economically weaker sections" and other weaker sections, who were already mentioned in Articles 15(4), 15(5) and 16(4) of the Constitution. He stated that the moment there was a vertical reservation, exclusion was vital to provide benefit to the target group. He added–

The opinion of Justice Maheshwari was concurred with by Justices Bela M. Trivedi and JB Pardiwala. Justice Bela Trivdei, in her judgement, also stated that treating economically weaker sections of the citizens as a separate class was a reasonable classification. The reasoning she provided for the same was that–

Per contra, the minority opinion written by Justice Ravindra Bhat and concurred with by CJI UU Lalit stated that the characterisation of including the poor among those covered under Articles 15(4) and 16(4), in the new reservations under Articles 15(6) and 16(6), as bestowing "double benefit" was incorrect. Justice Bhat remarked–

"What is described as 'benefits' for those covered under Articles 15(4) and 16(4) by the Union, cannot be understood to be a free pass, but as a reparative and compensatory mechanism meant to level the field – where they are unequal due to their social stigmatisation. This exclusion violates the non-discrimination and the non-exclusionary facet of the equality code, which thereby violates the basic structure of the Constitution."

The dissenting opinion stated that the non-inclusion of SC/ST and OBC communities, when they consisted of the largest segments of the poor, as mere reasonable under-inclusion, could not be accepted.