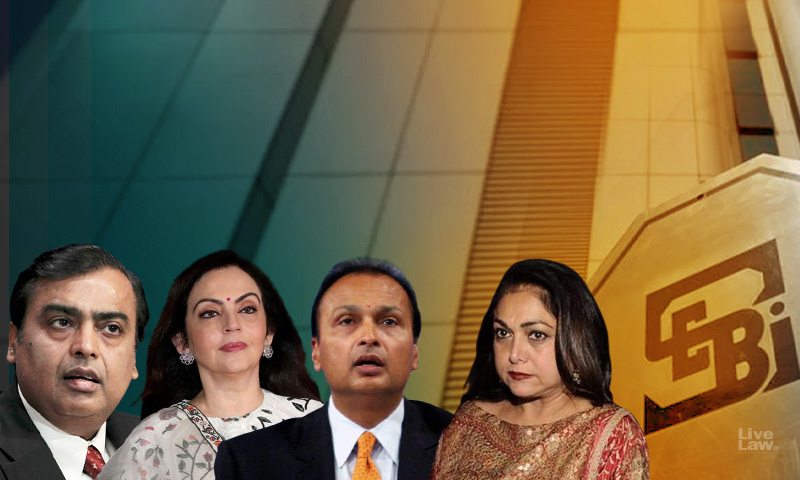 The Securities and Exchange Board of India has imposed a penalty of Rupees 25 Crores on prominent members of the Reliance family Mukesh Ambani, Anil Ambani, Nita Ambani, Tina Ambani and few other individuals.The penalty has been imposed for violations of the provisions of Regulation 11(1) of the Takeover Regulations over irregularities relating to the issue of 12 crore equity shares in...

The Securities and Exchange Board of India has imposed a penalty of Rupees 25 Crores on prominent members of the Reliance family Mukesh Ambani, Anil Ambani, Nita Ambani, Tina Ambani and few other individuals.

The penalty has been imposed for violations of the provisions of Regulation 11(1) of the Takeover Regulations over irregularities relating to the issue of 12 crore equity shares in January 2000 by Reliance Industries Ltd at a price of Rs.75 per share to 38 allottee entities.

The allotment was made consequent to the exercise of the option on warrants attached with 6,00,00,000-14% Non Convertible Secured Redeemable Debentures (NCD) of Rs.50/-each aggregating to Rs.300,00,00,000 (PPD IV) issued in the year 1994 .From the disclosure filed under Regulation8(3)of Securities and Exchange Board of India (Substantial Acquisition of Shares and Takeover) Regulations,1997 ( "Takeover Regulations") by RIL to Bombay Stock Exchange(BSE) on April28, 2000, it was observed that it had disclosed the above mentioned 38 allottee entities as Persons Acting in Concert("PACs") with the RIL promoters. From the aforesaid disclosures made by RIL it was observed that the shareholding of RIL promoters together with PACs had increased from 22.71% as on March31, 1999 to 38.33% as on March31, 2000. Out of these, 7.76% shares were acquired consequent upon a merger and thus were exempt under regulation 3(1) (j) (ii) of Takeover Regulations. However, 6.83% shares that were acquired by RIL promoters together with PACs in exercise of 3 crore warrants, were alleged to be in excess of ceiling of 5% prescribed in regulation 11(1) of Takeover Regulations.

It was alleged that the obligation not to make additional acquisition of more than 5% of voting rights in any financial year unless such acquirer makes a public announcement to acquire shares in accordance with the regulations under regulation 11(1) of Takeover Regulations arose on January 7, 2000, i.e. the date on which the PACs were allotted RIL equity shares on exercise of warrants issued in January 1994.Since the promoters and PACs have not made any public announcement for acquiring shares, it is alleged that they have violated the provisions of regulation 11(1) of Takeover Regulations.

The order passed by K Saravanan, Adjudicating Officer of the SEBI, observed :

"I hold that the Noticees by not making a public announcement have violated and have been continuing to violate the provisions of Regulation11(1) of the Takeover Regulations".

"The Noticees by their failure to make public announcement, deprived the shareholders of their statutory rights/ opportunity to exit from the company"

"The acquisition of shares which gives rise to voting rights thereon is a continuous contravention of the bar in law contained in Regulation 11 as the Acquirers and Persons acting in Control are not 'entitled'in law to lawfully exercise the voting rights based on such a null and void acquisition. This cannot be considered as anything but a continuing failure to give the public announcement of the open offer as required under Regulation 11(1) of the Takeover Regulations".

"In the instant case, the violation was not one which was committed once and for all but that which continues till date. The violation is a disobedience of the statutory provisions by which the acquisition of securities giving the Noticees enhanced control by the exercise of voting rights, etc and these are violations which are continuing so long as the voting rights are acquired in violation of the letter and spirit of the law".

"It is an admitted fact that the Noticees did not make the public announcement as per the mandatory requirement of Regulation 11 of the Takeover Regulations and the open offer being a consequential and necessary part thereof, which was absolute in nature. Such a failure is a continuing violation till discharge".

The violation of Regulations11(1) of the Takeover Regulations makes them liable for penalty under Section 15H of the SEBI Act, 1992, the market regulator held.

The penalty has been imposed jointly and severally on Mukesh Ambani, Anil Ambani, Nita Ambani, Tina Ambani and fifteen other members of the Ambani Family and few Reliance entities.

The penalty has to be deposited within a period of 45 days.

Some of the noticees, such as Mukesh Ambani's children Akash Ambani and Isha Ambani, and Anil Ambani's son Jayanmol Ambani, were minors on the date of the violation, January 7, 2000.

Referring to Section 8 of the Hindu Minority and Guardians Act, the SEBI held that Mukesh and Anil were the natural guardians of their children. Hence, they were liable on account of the violation in respect of the shares held by their children, who were minors on the date of violation.

"I note that the respective Noticees who are the Natural Guardians of the aforesaid minor Noticees are responsible not only on their own behalf but also on behalf of the minors", the Adjudicating Officer said in the order