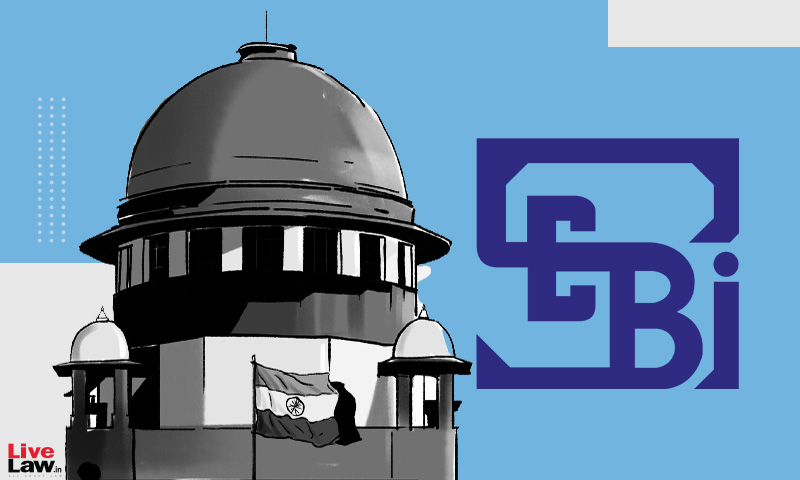 The Supreme Court on Wednesday stayed the award of costs of 8 lakh imposed on Securities and Exchange Board of India (SEBI) by the Securities Appellate Tribunal (SAT).A Bench comprising Justice DY Chandrachud and Justice Surya Kant issued notice in SEBI's civil appeal filed challenging the order passed by SAT. The issue arose from an order passed by SEBI's Whole Time Member (WTM)...

The Supreme Court on Wednesday stayed the award of costs of 8 lakh imposed on Securities and Exchange Board of India (SEBI) by the Securities Appellate Tribunal (SAT).

A Bench comprising Justice DY Chandrachud and Justice Surya Kant issued notice in SEBI's civil appeal filed challenging the order passed by SAT. The issue arose from an order passed by SEBI's Whole Time Member (WTM) directing certain entities to disgorge the unlawful gains earned through stock market fraud. The SAT held that SEBI's order to be in violation of the principles of natural justice and had further imposed on SEBI costs of Rs.8 lakh ( Rs 2 lakh per Respondent totalling to Rs.8 lakh payable within 8 weeks from the date of the impugned judgment.

"Pending further orders, there shall be a stay of the award of costs in the impugned judgment of the Securities Appellate Tribunal dated 20 December 2021", the Bench recorded

The Bench has directed the counter affidavit to be filed within a period of four weeks and rejoinder, if any, in a period of two weeks thereafter.

SEBI submitted that the SAT does not have the jurisdiction and is not empowered under the SEBI Act, 1992, to impose costs on SEBI which is a statutory regulator established under the said Act.

It further argued that the impugned judgment of the SAT is patently erroneous and unsustainable in law, as the 'power to determine violation of securities laws and to impose debarment on the Respondents' and the power to subsequently direct disgorgement of unlawful gains made by Respondents are separate and distinct and the principle of res judicata cannot be said to be applicable.

According to SEBI, the SAT has grossly erred in concluding that the issuance of show cause was wholly illegal and order of the WTM, SEBI is clearly barred by the principles of res judicata and cannot be sustained and hence did not find it necessary to dwell on the merits of the case.

SEBI submitted that the order was passed by the WTM after considering the facts of the case and allegations against Respondents and other entities, their submission and other materials available on record. Further, it proceeded to determine the exact quantum of illegal gains made by them pursuant to violations already established against them by a prior order.

SEBI has pointed out that the issue pertaining to the jurisdiction /power of the SAT to impose costs on SEBI, under the SEBI Act was also raised by SEBI before the Supreme Court titled Securities and Exchange Board of India Vs. Bipin Taro Vazirani, which has been disposed of. In that case, the court had deleted the direction for payment of costs observing that the question of law is pending before this Court in a civil appeal.

SEBI therefore argued that the SAT has grossly erred in imposing costs amounting to Rs.8 lakh in SEBI, inspite of the said issue of jurisdiction or power of the SAT to impose costs on SEBI under the SEBI Act.

The respondent number 1 Vital Communications Ltd. came out with an Initial Public Offering (IPO) of 20,00,000 equity shares of Rs.10/- each in December, 1995. Subsequently, it made allotment of 72,00,000 equity shares on the preferential basis pursuant to which the shares of the company were listed at Bombay Stock Exchange and at National Stock Exchange of India Limited

SEBI then conducted an investigation in the misleading advertisement issued by certain companies including Respondent No.1 relating to buy back of its shares, issue of bonus shares and preferential issue of shares.

Based on the investigation, Show Cause Notices (SCNs) was issued to Respondents, requiring them to show cause as to why an appropriate directions under Sections 11 of the SEBI Act, including a direction debarring them from accessing the capital market and trading in securities should not be issued for violation of SEBI (Prohibition of Fraudulent and Unfair Trade Practices relating to Securities Market) Regulations 1995.

The WTM, SEBI, after hearing the parties, by an order dated 20.02.2008, restrained them from accessing the securities market for a specified period. When the order was challenged the SAT set aside WTM's order and further remanded the case to the WTM, SEBI.

The WTM, SEBI then passed another order restraining the entities including Respondent No.1, its Directors, preferential allottees and other entities, from accessing the securities market.

Two investors, then filed an appeal before the SAT, seeking a direction that SEBI pays them for losses suffered in the process of purchasing shares from Respondent.

The SAT directed SEBI to consider the complaint of these two investors pertaining to misleading and fraudulent advertisement issued by Respondent No.1, and in the event SEBI found it guilty of playing fraud on the investors, it may consider directing the concerned entity to refund the actual amount spent by the two investors.

The WTM, SEBI, passed an order dated 16.12.2014 holding that the ill-gotten gains, if any, made by the persons / entities mentioned in the SEBI order has not been quantified during the investigation and, therefore, the same was not considered in the order.

The WTM further held that the feasibility of quantifying the ill-gotten gains, if any, would be considered and thereafter consider restitution on merits in the case of complainants . Further, relief to the complainants could only be given through the process of disgorgement if justified by the facts and circumstances of the case.

The matter was re-examined and the WTM, SEBI passed an order dated 01.04.2016, directing the investigation Department of SEBI to look into the exact figure of ill-gotten gains by Respondent No.1, Promoters/ Directors, preferential allottees and Master Finlease Ltd (Respondent 3) and initiate the disgorgement proceedings against those who perpetrated fraud on the investors, at the earliest.

The WTM, SEBI, further held that the claim of the two investors would be considered in accordance with the provisions of the SEBI Act. The investigation was once again initiated and subsequently, a show cause dated 19.01.2018 was issued to Respondents and other entities.

The WTM then passed an order directing the respondent and other entities to disgorge the unlawful gain, totalling to Rs.4,55,91,232 with interest within 45 days by way of crossed demand draft drawn in favour of "Securities and Exchange Board of India" payable at Mumbai.

Four of these entities moved SAT, which then passed the impugned order quashing the WTM, SEBI's order dated 28.09.2018 with costs of Rs.2 lakh to be paid by SEBI to each of the 4 Respondents, within 8 weeks from the date of the impugned judgment.