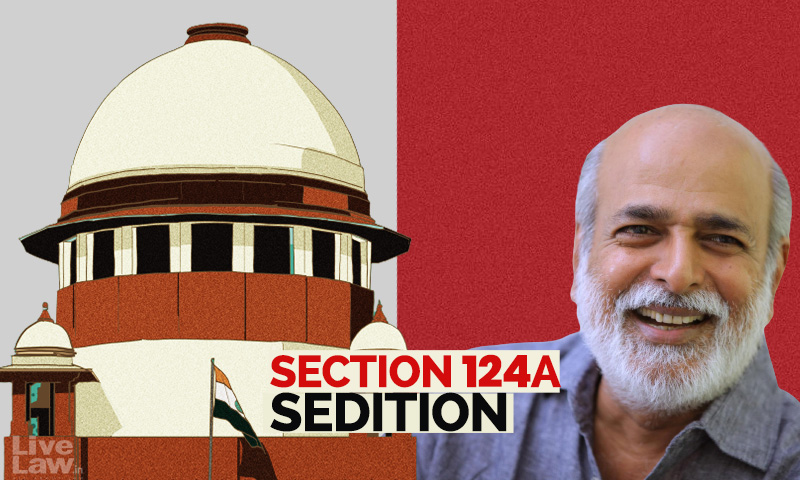 Senior journalist Sashi Kumar, founder of Asianet and the current Chairman of Asian School of Journalism, has approached the Supreme Court challenging the constitutional validity of the offence of sedition under Section 124A of the Indian Penal Code.He has filed an intervention application in the writ petition Kishorechandra Wangkhemcha and another versus Union of India filed by two Manipur...

Senior journalist Sashi Kumar, founder of Asianet and the current Chairman of Asian School of Journalism, has approached the Supreme Court challenging the constitutional validity of the offence of sedition under Section 124A of the Indian Penal Code.

He has filed an intervention application in the writ petition Kishorechandra Wangkhemcha and another versus Union of India filed by two Manipur based journalists questioning the constitutionality of the offence of sedition. A bench led by Justice UU Lalit had issued notice on the writ petition on April 30.

Sashi Kumar's application, filed through Advocates Kaleeswaram Raj,Nishe Rajen Shonkar and Thulasi K Raj,  begins by referring to the Constitutional Assembly Debates where members like Jawaharlal Nehru, M Ananthasayanam Ayyangar, KM Munshi etc spoke at lengths about the "obnoxious" nature of this offence which was used by the colonial rulers to suppress the freedom movement.

"Section 124-A under, which I am happily charged, is perhaps the prince among the political sections of the IPC designed to suppress the liberty of the citizen", the application quotes the words of Mahatma Gandhi.

The applicant argues that the provision creates a 'chilling effect on free speech' as it suffers from the defects of 'vagueness' and 'overbreadth'. There is a need to revisit the dictum in Kedarnath case- which had upheld Section 124A after reading it down - in the light of the latest developments in free speech jurisprudence after the decisions in Shreya Singhal, KS Puttaswamy, Navtej Johar, Joseph Shine cases.

Section being applied in a politicized fashion

The applicant says that the recent spurt in cases under Section 124A IPC shows that the provision was being applied in a "politicized fashion".

"The application of  Section 124-A by the state police machinery consistently fails to acknowledge the narrow scope for restriction of freedom of speech laid down in Article 19(2) and reiterated in Kedar Nath cases", the application says.

There has been a dramatic jump in charging a person with the offence of sedition since 2016. In 2019, 93 cases were on the ground of sedition as compared to the 35 cases that were filed in 2016. The same constitutes a 165% increase. Of these 93 cases, charge sheets were filed in a mere 17% of cases and even worse, the conviction rate was an abysmally low 3.3%. Additionally, it has been reported that 9% of cases filed under Section 124-A IPC were closed only in the year 2019 due to insufficient evidence, or because the accused could not be traced.

In 2019, more than 3000 persons protesting against the Citizenship Amendment Act were charged with seditious provisions. It is also reported that on account of protesting about land disputes, more than 3,300 farmers were also similarly charged.

"..the law is not a measure simply aimed at the purported objective. It goes beyond the aim it seeks to achieve. Also, alternate legal provisions and laws in the Penal Code itself existincluding inherent vagueness of the terms used in the law, the chilling effect of the law etc were not correctly appreciated by the court. The impact of the impugned law on rights, in particular the rights to equality and freedom of speech is perverse", the application says.

Sashi Kumar seeks permission of the Court to intervene in the matter to place on record certain "necessary materials, reports, academic articles and empirical data concerning the subject matter".

The Supreme Court will consider the main writ petition on July 12.