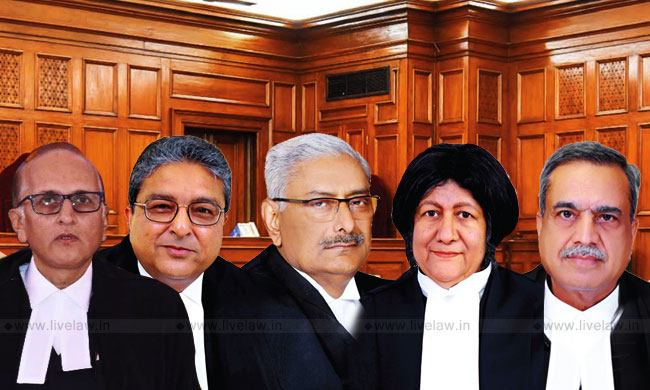 The Constitution Bench of the Supreme Court, comprising of Justices Arun Mishra, Vineet Saran, Indira Banerjee, M.R. Shah, and S. Ravindra Bhat, framed the issues regarding the questions of law pertaining to interpretation of Section 24 of the Right to Fair Compensation and Transparency in Land Acquisition,Rehabilitation and Resettlement Act, 2013.

Post-hearing the questions framed by Solicitor General Tushar Mehta, ASG Pinky Anand, and Senior Advocates Mohan Parasaran and Anoop Chaudhary for the Respondents, and Sr. Advs. Shyam Divan and Dinesh Dwivedi for the Appellants, the Constitution Bench finally settled on six issues which were framed:

1. What is the true meaning of "compensation has not been paid"? While considering this, the construction of Section 31(2) of the Land Acquisition Act, 2013 will also be decided so as to shed a light of clarity on the expression.

2. Whether the words "and/or" used in Section 24(2) are to be read as conjunctive or disjunctive? Additionally, whether the proviso forms a part of both Section 24(1) and Section 24(2) of the Land Acquisition Act, 2013?

3. What is the true meaning of the expression "deposited in the account of the beneficiary"? However, this question is subsumed by the first issue.

4. Whether period of proceedings should be excluded from the five-year limitation period?

5. What is the true meaning of the expression "physical possession of the land has not been taken"? Also, the mode of taking possession of land needs to be elaborated.

6. Whether it was open to the coordinate bench in the case of Indore Development Authority to declare the judgement delivered in the Pune Municipal Corporation case as per incuriam?

Justice Arun Mishra additionally stated that these questions of law were tentative and were open to correction. On the basis of the same, he instructed for the hearing on merits to begin from November 6, 2019.