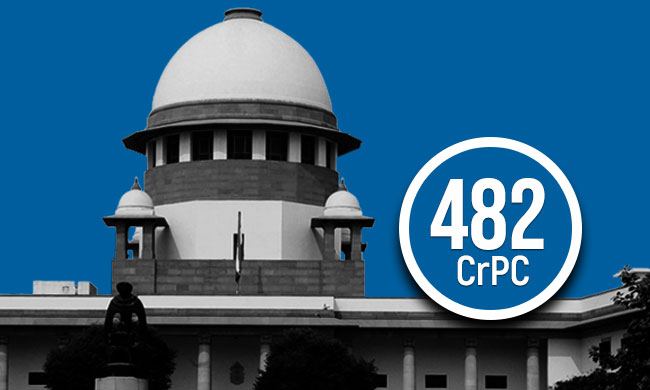 Petition For Quashing FIR Can Be Entertained Even If Charge sheet Is Filed During Its PendencyIn Anand Kumar Mohatta vs State (Govt. Of Nct Of Delhi) Supreme Court held that High Courts can entertain a petition filed under Section 482 CrPC seeking quashing of FIR, even if the charge sheet is filed during the pendency of that petition."There is nothing in the words of this Section which...

In Anand Kumar Mohatta vs State (Govt. Of Nct Of Delhi) Supreme Court held that High Courts can entertain a petition filed under Section 482 CrPC seeking quashing of FIR, even if the charge sheet is filed during the pendency of that petition.

"There is nothing in the words of this Section which restricts the exercise of the power of the Court to prevent the abuse of process of court or miscarriage of justice only to the stage of the FIR. It is settled principle of law that the High court can exercise jurisdiction under Section 482 of Cr.P.C even when the discharge application is pending 2 (2011) 7 SCC 59 7 with the trial court. Indeed, it would be a travesty to hold that proceedings initiated against a person can be interfered with at the stage of FIR but not if it has advanced, and the allegations have materialized into a charge sheet. On the contrary it could be said that the abuse of process caused by FIR stands aggravated if the FIR has taken the form of a charge sheet after investigation. The power is undoubtedly conferred to prevent abuse of process of power of any court."

In Narayan Malhari Thorat Vs. Vinayak Deorao Bhagat Supreme Court held that before an investigation is complete, a high court, in a petition filed by the accused under Section 482 CrPC, could not go into the aspect whether there was requisite mental element or intention on part of the accused.

"At this juncture when the investigation was yet to be completed and charge-sheet, if any, was yet to be filed, the High Court ought not to have gone into the aspect whether there was requisite mental element or intention on part of the respondent."

In Md. Allauddin Khan vs The State Of Bihar. Supreme Court re-iterated that mere pendency of a civil case between complainant and accused is not a reason to quash criminal case.

"The High Court failed to see that mere pendency of a civil suit is not an answer to the question as to whether a case under Sections 323, 379 read with Section 34 IPC is made out against respondent Nos. 2 and 3 or not. The High Court should have seen that when a specific grievance of the appellant in his complaint was that respondent Nos. 2 and 3 have committed the offences punishable under Sections 323, 379 read with Section 34 IPC, then the question to be examined is as to whether there are allegations of commission of these two offences in the complaint or not. In other words, in order to see whether any prima facie case against the accused for taking its cognizance is made out or not, the Court is only required to see the allegations made in the complaint. In the absence of any finding recorded by the High Court on this material question, the impugned order is legally unsustainable.

High Court had no jurisdiction to appreciate the evidence of the proceedings under Section 482 Cr.P.C

In Md. Allauddin Khan vs The State Of Bihar Supreme Court held that High Court had no jurisdiction to appreciate the evidence of the proceedings under Section 482 of the Code Of Criminal Procedure, 1973 because whether there are contradictions or/and inconsistencies in the statements of the witnesses is essentially an issue relating to appreciation of evidence and the same can be gone into by the Judicial Magistrate during trial when the entire evidence is adduced by the parties.

Supreme Court, in Dineshbhai Chandubhai Patel v State of Gujarat, observed that the high court, while exercising inherent powers under Section 482 of the Criminal Procedure Code , in order to examine as to whether the factual contents of the FIR disclose any prima facie cognizable offence or not, cannot act like an investigating agency and nor can it exercise powers like an appellate court.

"In order to examine as to whether the factual contents of the FIR disclose any prima facie cognizable offences or not, the High Court cannot act like an investigating agency and nor can exercise the powers like an appellate Court. The question, in our opinion, was required to be examined keeping in view the contents of the FIR and prima facie material, if any, requiring no proof."

Supreme Court in Jitender Kumar @ Jitender Singh vs. State of Bihar has once again made it clear that it is obligatory for the High Court to assign the reasons as to why a petition filed under Section 482 of Criminal Procedure Code is allowed or rejected.

"Time and again, this Court has emphasized the necessity of giving reasons in support of the conclusion because it is the reason, which indicates the application of mind. It is, therefore, obligatory for the Court to assign the reasons as to why the petition is allowed or rejected, as the case may be."

In Prof RK Vijayasarathy vs. Sudha Seetharam Supreme Court has reiterated that a High Court, while exercising jurisdiction under 482 of the Code of Criminal Procedure, can examine wether a matter which is essentially of a civil nature has been given a cloak of a criminal offence.

Where the ingredients required to constitute a criminal offence are not made out from a bare reading of the complaint, the continuation of the criminal proceeding will constitute an abuse of the process of the court, liable to be quashed, the bench comprising Justice DY Chandrachud and Justice Hemant Gupta said in the judgment.

Section 362 of CrPC provides that, no Court, when it has signed its judgment or final order disposing of a case, shall alter or review the same except to correct a clerical or arithmetical error. Allowing the appeal, the bench comprising Justice DY Chandrachud and Justice Hemant Gupta said:

The High Court while dismissing the petition under Section 482 observed that it would be open to the second respondent to pursue his remedies after framing of the charge. In view of the specific bar which is contained in Section 362, we are of the view that the impugned order of the High Court is unsustainable. Such an application for review or modification could not have been entertained."

In State of Madhya Pradesh vs Laxmi Narayan, Supreme Court issued the following guidelines regarding quashing of Criminal Proceedings on the ground of compromise between the parties.

i) The power conferred under Section 482 of the Code to quash the criminal proceedings for the non-compoundable offences under Section 320 of the Code can be exercised having overwhelmingly and predominantly the civil character, particularly those arising out of commercial transactions or arising out of matrimonial relationship or family disputes and when the parties have resolved the entire dispute amongst themselves;

ii) such power is not to be exercised in those prosecutions which involved heinous and serious offences of mental depravity or offences like murder, rape, dacoity, etc. Such offences are not private in nature and have a serious impact on society;

iii) similarly, such power is not to be exercised for the offences under the special statutes like Prevention of Corruption Act or the offences committed by public servants while working in that 24 capacity are not to be quashed merely on the basis of compromise between the victim and the offender;

iv) offences under Section 307 IPC and the Arms Act etc. would fall in the category of heinous and serious offences and therefore are to be treated as crime against the society and not against the individual alone, and therefore, the criminal proceedings for the offence under Section 307 IPC and/or the Arms Act etc. which have a serious impact on the society cannot be quashed in exercise of powers under Section 482 of the Code, on the ground that the parties have resolved their entire dispute amongst themselves. However, the High Court would not rest its decision merely because there is a mention of Section 307 IPC in the FIR or the charge is framed under this provision. It would be open to the High Court to examine as to whether incorporation of Section 307 IPC is there for the sake of it or the prosecution has collected sufficient evidence, which if proved, would lead to framing the charge under Section 307 IPC. For this purpose, it would be open to the High Court to go by the nature of injury sustained, whether such injury is inflicted on the vital/delegate parts of the body, nature of weapons used etc. However, such an exercise by the High Court would be permissible only after the evidence is collected after investigation and the charge sheet is 25 filed/charge is framed and/or during the trial. Such exercise is not permissible when the matter is still under investigation. Therefore, the ultimate conclusion in paragraphs 29.6 and 29.7 of the decision of this Court in the case of Narinder Singh (supra) should be read harmoniously and to be read as a whole and in the circumstances stated hereinabove;

v) while exercising the power under Section 482 of the Code to quash the criminal proceedings in respect of non-compoundable offences, which are private in nature and do not have a serious impart on society, on the ground that there is a settlement/compromise between the victim and the offender, the High Court is required to consider the antecedents of the accused; the conduct of the accused, namely, whether the accused was absconding and why he was absconding, how he had managed with the complainant to enter into a compromise etc.