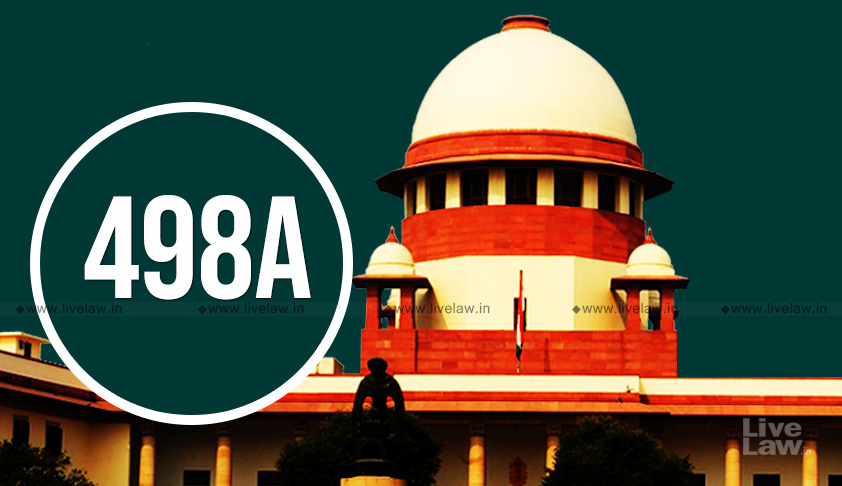 The Supreme Court recently quashed charges of Cruelty by a wife against her husband basis an amicable settlement between them.A bench of Chief Justice SA Bobde & Justice R Banumathi held that considering that the complainant wife and accused husband have already compromised the matter, the FIR registered in the Criminal case viz. Sections 498A, 506, 323 & 406 stood quashed....

The Supreme Court recently quashed charges of Cruelty by a wife against her husband basis an amicable settlement between them.

A bench of Chief Justice SA Bobde & Justice R Banumathi held that  considering that the complainant wife and accused husband have already compromised the matter, the FIR registered in the Criminal case viz. Sections 498A, 506, 323 & 406 stood quashed.

"Mr. Chitnis, learned counsel appearing for the respondent-State, has also submitted that he has instructions to state that the husband has amicably compromised the matter with his wife. The State has no objection for quashing the aforesaid FIR registered against the present appellant. Since the husband and the wife have amicably settled the matter, considering the fact that the appellant is a distant relative of the husband and wife, FIR No.26 of 2015 in Regular Criminal Case No.653 of 2015 is hereby quashed qua the appellant - Jairaj".

In an earlier decision of the Top Court B.S. Joshi V. State of Haryana, the Court examined the inherent powers of the High Court under Section 482 of the CrPc read with Article 226 of the Constitution.

The Court had decided on the question of whether quashing of criminal proceedings or FIR or Complaint filed by the wife under Sections 498A & 406 IPC can be declined on the ground that since the offences are non-compoundable, therefore would it be permissible for the court to quash the Criminal proceedings or complaint after the husband and wife agree for a mutual settlement of disputes?

While answering the question in the affirmative, a bench of Justices YK Sabharwal & HK Sema had reiterated the observations made in G.V. Rao v. L.H.V. Prasad & Ors. [(2000) 3 SCC 693] for determining the approach required to be kept in view in matrimonial dispute by the Courts.

"....it was said that there has been an outburst of matrimonial disputes in recent times. Marriage is a sacred ceremony, the main purpose of which is to enable the young couple to settle down in life and live peacefully. But little matrimonial skirmishes suddenly erupt which often assume serious proportions resulting in commission of heinous crimes in which elders of the family are also involved with the result that those who could have counselled and brought about rapprochement are rendered helpless on their being arrayed as accused in the criminal case. There are many other reasons which need not be mentioned here for not encouraging matrimonial litigation so that the parties may ponder over their defaults and terminate their disputes amicably by mutual agreement instead of fighting it out in a court of law where it takes years and years to conclude and in that process the parties lose their "young" days in chasing their "cases" in different courts."

In light of this, the Court stated that the object of introducing Section 498A in the IPC was to prevent torture to a woman by her husband or by relatives of her husband, however a "hyper-technical view would be counter productive and would act against interests of women and against the object for which this provision was added".

Therefore, the Court, while setting aside the impugned judgment dismissing the petition filed by the appellants seeking quashing of the FIR for in view of the High Court the offences under Sections 498A and 406 IPC are non compoundable and the inherent powers under Section 482 of the Code cannot be invoked to bypass the mandatory provision of Section 320 of the Code, said that non-exercise of inherent exercise of power to quash the proceedings to meet the ends of justice would prevent women from settling the disputes.